When a second token is revealed during a single skill test at your location, exhaust Blessing of Isis: Cancel that token and treat it as if it were a token instead. Return both of those tokens to the chaos bag after this test ends. 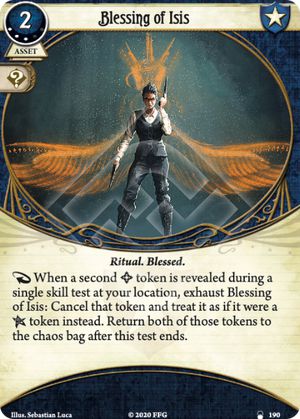 I firstly under-estimated Blessing of Isis, but this has good potential. If you have Favor of the Sun, you may utilize this as Ancient Covenant. Non-permanent 3xp is expensive, but you could gain effects and save your . Also, I found that you could find 2 easily by Olive McBride. In many case, + + any token will be succeed.

One problem is that you need to keep your bag with lots of . This means that if you plan to seal tokens, such as Rite of Sanctification, Shield of Faith, and Holy Spear, it's hard to trigger Isis.

This card seems super good for Mateo and Mary. But using it for an entire campaign in three player, with a bag often crammed full of blessings, it didn’t trigger tremendously often. The people who really want this card, rogues who can go through their decks fast and get both favors of the sun, can’t take it.

In four player, you have enough skill checks and people per location that this will trigger more often. And solo, it feels completely skippable; if you can reliably get two blessings in a row, you can probably just succeed without paying three XP and two bucks.

MrGoldbee · 1174
If all you want is to basically guarantee success off of drawing a bless, ancient covenant is by far the better than this. This is only really useful if you have a an elder sign worth trying to force into play. Mateo is pretty much the only character who can have this who really wants it in my opinion. Nathaniel also has a pretty good elder sign, but not a lot of bless tech — NarkasisBroon · 1 2/23/21
Zoey has a great elder sign and a strong compatibility with many bless cards. Even with the bag pumped at or close to 10, though, this card isn't pulling its weight in a two-player game. It's 3XP for a possible extra damage that almost never triggers...I should have put that XP towards something that would guarantee damage. So far, Blessing of Isis is all style and no substance. — Pinchers · 91 2/24/21
Zoeys elder sign is ok, but given how easily guardians get access to damage, 2 damage per action is pretty standard, so +1 damage is +half an action and only triggers on fight checks so maybe a third of an action all told. By comparison Mateo's is an action, or if it's better, a card and a resource, so maybe 1 to 1.5 actions worth of value. I'd say Mateo's so I'd say elder sign is 4-5 times as valuable as zoeys. This analysis is a bit naive, but it helps to rank zoeys elder sign. It's not great, it's ok. It's one of the best guardian ones, but honestly most guardians have really sub par elder signs, which is the real reason the card is lacklustre in the current card pool — NarkasisBroon · 1 2/24/21
Mateo's got the best elder sign, we can all agree on that. :-D But maybe think of Zoey's elder sign as 1 testless damage on a free action--similar to her cross. If an enemy engages you, you fire the cross as a free action, and then pull the elder sign during an attack with a 2-damage weapon...that's essentially 4 damage in one action, which is a one-shot kill for the vast majority of non-elites. Pulling that elder sign (or cheating it out with Isis) gives you more momentum during your turn to engage an enemy off a friend, move to where they are, or hit a second enemy at your location. I'll make the argument that that's a full action, not a half-action. So at its best, yes, Isis would help Zoey kill much more efficiently, and keep those blessings in the bag for everyone to enjoy. I want to like this card... — Pinchers · 91 2/24/21
Assuming 18 chaos tokens in the bag along with 10 bless tokens, the odds of drawing two bless tokens is about 12%. So it won't be common but it's not impossible either. — togetic271 · 3 4/9/21
0

The probability to see two bless tokens goes from neglible at 2-3 tokens in the bag, to nearly 20-30% at the maximum 10 tokens, with a Mary doing her very best to fill the bag with goodness, and/or other characters helping out somehow, those odds can actually be rather good and consistent, netting perhaps 3-5 extra triggers. The trick then is to take characters who've got great abilities, Leo Anderson, Nathaniel Cho and Sister Mary herself all like this effect.

As a last method to support this card, there's seal mechanics. When you've got a Chthonian Stone, the Day of Reckoning weakness, Seal of the Seventh Sign and other mechanics to block out other tokens, this in turn enhances your chances at seeing back to back tokens, this is actually a reciprocal synergy so a large group playing into this theme together can set up games where a heap of negative tokens is locked out entirely and blesses are more then half the bag.

I dont think Blessing of Isis is a particularly excellent card, for the simple reason that it relies on setup and randomness, but it's fun and can be extremely powerful in that niche window when you're consistently seeing those lucky draws. At least once you've set up, the that trigger Blessing of Isis do go back into the bag when triggered, so Blessing of Isis is a bit of a "self refueling engine".

Tsuruki23 · 2150
Good review, two notes: Father Mateo can take this too, and he has arguably the very best Elder Sign effect, plus access to lots of sealing cards and token manipulation. Also, if you have a supportive build for Mateo, Carolyn, or Mary, you can run this alongside a non-guardian with a good elder sign. Skip buying Favor of the Sun and let your Silas, Winnifred, or Lily run it instead to trigger their powerful recursion effects. — OrionJA · 1 9/27/21