Play Enchanted Armor under the control of any investigator at your location. 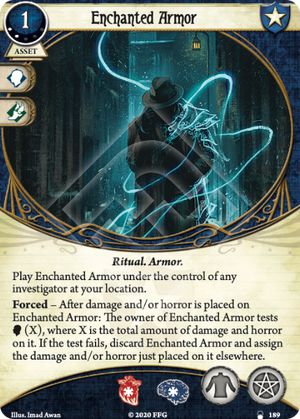 For the sake of clarity.

When Enchanted Armor "dies", the only reassinged pain, is the pain you just placed, so if you're playing with some buffs and youre running around with 5 or 6 total pain on there, and you take another point of pain that fails you the test and the armor breaks, you're only reassignigng that bit of pain that broke the camel's back, not the whole pile. This is how I read the card initially and it felt real bad.

So anyway, on the actual correctly read card:

There is'nt much to say. Buff your as high as you can, bring Arcane Studies and/or Physical Training to routinely buff yourself to high heaven, and just keep stacking those tokens high! Brother Xavier can help, so can Holy Rosary. I think you can reasonably expect to soak 4-6 total pain in this way before the dam breaks.

The best part is the straight and simple flexibility of soaking both horror and damage, as required at the time, most of you should be familiar with the bad bookkeeping feeling of loosing an ally because you're taking on too much of one kind of pain.

The downside of the card is the severe reduction in playability if you -dont- build into it, a Diana Stanley or Sister Mary will really make it shine, and so can anybody with Physical Training, but outside of those decks and builds, it's a dud card, especially on harder difficulties.

Tsuruki23 · 2281
not really "build around" to want your willpower high, that thing you use to defend against 11/10 treacheries seems like something you want even in a flightier guardian (since they have less sanity typically anyway), A cheaper, less XP elder sign amulet that sits in the body slot seems pretty good in alot of peps. — Zerogrim · 256 4/5/21
Fun target for Lonnie. — MrGoldbee · 1267 4/5/21
Lonnie can only fix items, not armors and rituals. — Susumu · 222 4/5/21
At harder difficulties, it's nearly unplayable even if you do have 6-7 will with static bonuses . It costs just 1 xp more to take 3 copies of Spiritual Resolve over 2 copies of enchanted armor. Technically there's a downside that you can't play it on other investigators, but practically if you really want to soak for other investigators Hallowed Mirror and Solemn Vow do a much better job. — suika · 8687 4/5/21
This card looks fun but I'm pretty low on it from a power level perspective. Maybe I'm underestimating it, it's certainly not easy to evaluate, but to me the fact that you get zero soak if you fail the first test is kind of unacceptable for an XP soak card. I also really hate gratuitous skill tests on Hard/Expert, so there's that, too. — CaiusDrewart · 2745 4/6/21
Not exactly _good_, but note that Skids or Leo could commit Three Aces to the test to automatically succeed. You could use it against BTV (though they can both take Delay the Inevitable, which is much better in that context). I wonder if you'd be able to tank the 100 horror from the final Agenda Flip in Carcosa? — Zinjanthropus · 209 4/7/21
Looks like you could. Soaking the horror isn't preventing it. https://arkhamdb.com/card/03045 — Yenreb · 15 4/12/21
In which case...what happens? You continue playing without an agenda? — suika · 8687 4/22/21
It would just prevent the mental trauma you get, the game ofcourse will be over anyway. Bruiser seems now a better option than "Physical Training" to buff the tests. — Susumu · 222 11/22/21