You have two additional hand slots, which can only be used to hold Weapon assets.

While you have Weapon assets held in 2 or more hand slots, you get +1 . 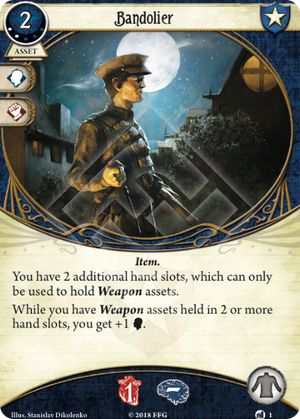 Keeping your hands free for Flashlights and/or Magnifying Glasses while also giving you a boost to your worst stat seems like a slam dunk to me. A nominal resource and xp cost might limit it, given how many fun toys Guardians have access to, and in a Flamethrower deck it's pretty useless, but enabling you to hold Lightning Gun, Machete and Survival Knife all at the same time is pretty appealing. Not super realistic, but I'm definitely going to try and make it happen.

SGPrometheus · 687
Skids can use it to hold Ornate Bow and Lockpicks at the same time. Both of those leverage his strong agility stat. Makes me want to make a solo Skids deck. — Zinjanthropus · 212 5/25/20
This looks good, but I came here hoping to see a Permanent Bandolier! Maybe a higher level Bandolier will come about. — shenaniganz11 · 9 10/29/20
5

This card presents an interesting opportunity cost consideration for Guardians who draw the Dendromorphosis weakness. Drawn at a bad time, that weakness can really set a Guardian back by discarding the main weapon from the Guardian's hand.

Between the will boost and the capability to turn Dendromorphosis into a fast 1 health soak, this card becomes a very strong play for this edge case.

The upgraded Bandolier is a pretty nice card, the old version suffered from having a high cost for a minuscule bonus that doesn't actually contribute to winning a scenario but rather enables some very specific deck-tech. Spending 2 resources and an action to -allow- yourself to spend further actions and resources to deploy MORE assets, is'nt particularly useful, especially since 2 resources is quite a lot, considering that the assets filling your hand slots typically cost 2-6 resources themselves.

Bandolier's saving grace is the boost, it's exactly the kind of thing a combat character really needs. Whether you're Roland Banks or "Skids" O'Toole the boost helps combat horror treacheries like Rotting Remains and nasty stuff like Crypt Chill or Frozen in Fear. The additional hand slot is also surprisingly useful, suddently your fully setup hand plan might look something like this: Lightning Gun + 2xMagnifying Glass, Chicago Typewriter + Switchblade + Lockpicks, Shotgun + Switchblade + Flashlight, Old Hunting Rifle + Machete + Flashlight. The extra hand slot also makes deploying the whole build easier since there wont be any cases where you deploy backup weapons and gotta discard one when a 2-handed weapon comes into play, and more usefully, you can deploy two two-handed weapons simultaneously. I found the ability to get both my copies of a main weapon into play simultaneously just as useful as opening space for backups and/or clue-tools, not to mention the deckbuilding freedom that opens up when you can put 3 or 4 2-handers in a deck and not be redundant.

This upgrade doesn't get around Bandoliers core issue, an added cost and time investment to net benefits that don't serve to progress the scenario but are purely defensive or utilitarian. However, the static defense is certainly potent, the deckbuilding impact and increase to combat efficiency can really smooth out a babysitter or allow a focused fighter to contribute clues.

Frankly, I still think the card lacks an active role in beating a scenario, and 2xp (multiplied to 4 for the set, which is absolutely required) is a lot to ask when the plan is to get a bunch of high level weapons, but perhaps if your main concerns at that point are your ability to withstand horror then the Bandolier is your ideal next step. Personally, I think it could have done with an extra pip.

Tsuruki23 · 2348
Being able to wield both the Ornate Bow _and_ Lockpicks seems really solid for solo Skids, especially if he is planning on evading most things. — Zinjanthropus · 212 5/25/20
I assume you could equip both copies of boxing gloves, and therefore get a double stat boost and trigger both cards? Don’t see why not. — Vonwoz · 1 2/6/21
3

This card is really good for any Sistery Mary that wants to uses the .35 Winchester plus any other hand cards like The Chthonian Stone, Enchanted Blade, or Sign Magick (for more Spells!). And with a previously used Rite of Sanctification you may not even get the problem for paying all these assets.

Enrif · 4
Pretty good for solo Nathaniel Cho as well; his boxing gloves are great but one of these with a Flashlight not only helps his investigation but also that little Will boost can be surprisingly helpful during the Mythos Phase. — Krysmopompas · 298 12/13/22