Spend 1 ammo: Fight. You may spend any number of additional actions when you perform this attack. You get +2 for this attack for each action being spent (including this ability's cost). This attack deals +2 damage. 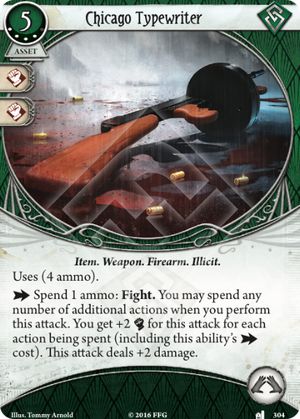 This thing is the big gun of doom. The big bang.

Compared to Lightning Gun Chicago Typewriter deals the same amount of damage, has one extra ammo and costs one less XP and Resource. The only disadvantage is the drastically lower attack bonus of +2 instead of +5, this is a big issue because most characters start from 4, so the combined attack is +9, a will land all of its's Lightning bolts straight up with no help from anything else. The usually starts from 3 and the +2 puts them at +5, an unimpressive number to say the least, the extra action pump can remedy that partially. Other sources of raw boosts are required to reach proper accuracy.

Some simple upsides to Chicago Typewriter:

Jenny Barnes has the money to pay for it, she can emergency tech in some of those cards from to make the hits land. Jenny Barnes is probably the top character for utilizing the big gun right now. Until the next deluxe that is.

All in all, Chicago Typewriter is a great card, it's just in a weird spot where there aren't (good)characters around for whom it's a natural 1st priority upgrade. Thankfully this problem will be remedied in the Dreamlands deluxe where a 5 will be unleashed.

Tsuruki23 · 885
Nailed my thoughts on the Typewriter. This weapon is great but who wants to use it. Tony, who you mention, obviously likes it but I think The Ornate Bow is a better match for Skids and Jenny since you can invest totally in Agility upgrades and skill icons. This just seems to be a case where the cardset and investigator strengths and weaknesses work against what would otherwise be a great card. — TWWaterfalls · 273 12/29/19