Deal 1 damage to an enemy at your location. If this effect defeats that enemy, draw 1 card. If it is your turn, end your turn. This action does not provoke attacks of opportunity. 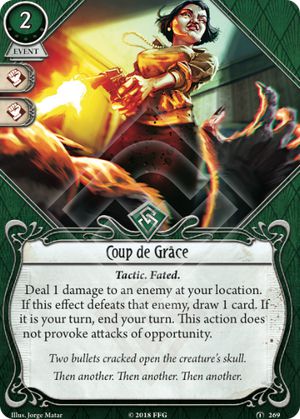 Remade review, everything gets clearer with more experience:

Coup de Grâce is a funky card and surprisingly, it's pretty good for what ails combat focused characters.

When you do battle with a "Skids" O'Toole or Jenny Barnes or Finn Edwards one thing will probably strike you, routinely making attacks at +6 or better is a challenge and you often need to go even higher to combat harder foes (or harder difficulties) or guarantee overcommitment success from cards like .41 Derringer or Switchblade. All those attacks probably cost money and cards and precious ammo. One annoyance that fighters struggle with uniquely is the "Hard enemy with 1 hp left", do you blow another shot from Chicago Typewriter on it? No gun to finish what you start with Sneak Attack or Backstab? Without proper bonuses you literally stand no chance at killing the bad guy like a might do with just raw .

This is an innate issue that Coup de Grâce fixes. It's a costly fix but a fix still. On one hand the card mechanic can do it, but also the 2 icons might get you there as well.

Coup de Grâce is the card that finishes what you start, it's a niche and the currect class that is queen of niches is of course, .

Worth noting that this card can situationally combo with Quick Thinking (especially in a multiplayer game when you have more chances to commit Quick Thinking outside of turn). If you can use Quick Thinking to get an extra action when it’s not your turn, e.g. during the Mythos phase or during another investigator’s turn, you can use Coup de Grâce without worrying about ending your turn prematurely.

A fun upside: you can combine this with the Chuck Fergus to play it fast & free at the end of your turn. if you’re going to run Chuck, this card goes from “sometimes it’s useful with quick thinking or against aloof enemies“ to "an enemy dies and you draw a card."

MrGoldbee · 1315
While I would love this to work, I don't think it's true. Chucks reaction says "When you play a (...) event, (...)" you can make it fast. If it's not your turn, you can not play Coup de Grace in the first place, so unfortunately you can not make it fast with Chuck. — Darth Sithius · 1 3/9/21
Rather cinematic, even. The cultist lay bleeding on the ground. Jenny answered Chuck's gaze with a nod and turned to leave. Fade to black over muffled gasps.... — housh · 141 3/9/21
You can play it as a free 4th action, at least. — MrGoldbee · 1315 3/9/21
I liked using it after "Sneak Attack" (2) vs. "The Man in the Pallid Mask", though Chuck can make only one of the the two events free and fast, if you play them in one round.. — Susumu · 271 3/9/21
I'd love to use this during someone else's turn, but 2 for Swift Reflexes and 2 more for this card is too much for anyone but Preston to afford. — Pinchers · 104 3/9/21
You can absolutely play Coup de Grâce with Chuck outside of your turn. The effects are applied before the card is played (via Fence's FAQ), so you can reduce the cost of this card by 2 and make it fast. If there is no play restriction, you can play this event during any free trigger window. — toastsushi · 62 3/10/21
Thanks for pointing this out toastsushi. Quoting the Fence FAQ: "Fast assets can be played in any player window during your turn, including the one after your last action is taken. Fence gives the card fast before it is actually played, so this is taken into account during its initiation sequence." The wording on Fence and Chuck is the same, so we can apply the same rule clarification and use Chuck to play Coup de Grace in another players turn. — Darth Sithius · 1 3/10/21
As far as Chuck not being able to make more than one event fast per round, consider that Jenny, Skids, and Guardian Tony can all take Inspiring Presence. they can also all take Dynamite, which is one of the absolute best Chuck targets — Zinjanthropus · 213 3/11/21
1

I don't find myself a fan of this card. Usually when something is dishing out a single point of damage I am looking to take out those pesky 1 cost enemies like a wil o' wisp or a cultist at a location that I can't afford to fail taking out or will slow me down. But, unlike using something like the Lantern which would remove it at any point in your turn, the Coup de Grâce requires (well not quite requires, but you won't want to do so otherwise) you to do it as your last action in the turn. I could wait until the last action to remove the wisp, but then I would be suffering the rest of the turn from stat reductions until then and if I take something out early in the turn I have lost valuable actions in doing so. Of which, I was likely better off evading and just walking away half the time.

There are circumstances that could arise, but I think this will be the card that sits in your hand waiting for those circumstances to arise that never gets played. You end up walking into a room last action and then take something out and draw a card sure, something like that or you fall short in one attempt or two and something needs a finishing blow, or your left something on one hit point left sure. I would often likely find myself holding this in hand and then just throwing it for the icons because those situations don't show up. That's what I feel like the normal use of the card would be as I play.

Bronze · 171
That’s exactly why highly conditional cards like this one have great skill icons. — Death by Chocolate · 1258 10/15/18
It certainly helps as a backup. And in some circumstances I would consider taking something like this instead of overpower or something of that nature. But, most of the time I would rather fill card slots with less situational elements. But I do enjoy the occasional fun situational card with good icons like a Hiding Spot or something. It's an entertaining card, I am just not that much a fan of it. — Bronze · 171 10/15/18
0

The most amazing thing about this card is that 5 point-blank shots to the skull deals only 1 damage. Who wants to pay 2 resources for an effect endowed in every investigator (to attack for 1)? And to top it off, your turn is now over. Terrible.

jmmeye3 · 595
Still a worthwhile consideration if you'd otherwise run Overpower. Testless damage is nice. — StyxTBeuford · 12744 7/11/19
Testless damage, and card draw? On a harder difficulty, the testless damage could come in handy. — cb42 · 33 7/12/19
You forgot the fact that the damage is testless...and that you can hit with this aloof enemies... — Alogon · 913 7/12/19
Not terrible - the number of times that a rogue has to use a bullet to ensure Str is high enough to land that one damage, vs. a card like this that saves the bullet and draws a card... It's not going to be the solution to every fight, but it's definitely of value to a lower Str rogue. — Time4Tiddy · 213 7/25/20
I do like this for aloof enemies, though it's a bit awkward for Whippoorwills (since it ends your turn). Still better than having to engage them, though — Zinjanthropus · 213 1/8/21
0

This card isn't terrible, I have had some fun using it, but it is generally a bit disappointing.

The resource cost of two wouldn't be much for a permanent asset, but for a one shot event it is fairly expensive, compared to the alternative of a skill card which is free. And the restrictions on Coup de Grace are really pretty limiting, unable to be combined with a weapon and usable only as your last action. Lots of times it would just sit in my hand waiting for that perfect moment, while I wished it was a card better suited for the situation I was actually in. The advantage of this card is that it is a totally automatic success, and that is a formidable advantage, the reason why you might consider including the card in your deck. But once I have a character who is set up with enough strength to intentionally enter combat, a skill card like Overpower would do a pretty good job making an attack very likely to hit, while being a lot cheaper and more flexible.

The saving grace of this card is having two strength icons, so it is actually can be used in the same situations as Overpower. But the card draw from overpower is quite a significant bonus, and with the skill bonus being so much more flexible, it is pretty tempting to simplify things by just taking Overpower and skipping this card. In general, I would only put this card in my deck if I had some space and wanted to try something different in my deck construction.

ChristopherA · 97
You can also target an aloof enemy, like the bird in Dunwich — Tharzax · 1 5/22/21
I liked this card in my Carcosa-run with Sefina and Chuck. With "Sneak Attack" (2) this was several times in the campaign an engage-free one-action, 2 resource defeat of the Pallid Mask, that draws you a card. And if the combo did not align, it was still often usefull to finish something off, that survived "Spectral Razor" or "Backstab" with 1 hitpoint. — Susumu · 271 5/22/21
i often play both overpower and coup de grace in rogues that want to do fighting, because double fists are hard to c — schafinho1 · 53 5/22/21