: Investigate. Your location gets -1 shroud for this investigation.

Discard Lantern: Deal 1 damage to an enemy at your location. This action does not provoke attacks of opportunity.

Ilich Henriquez
The Path to Carcosa #36. 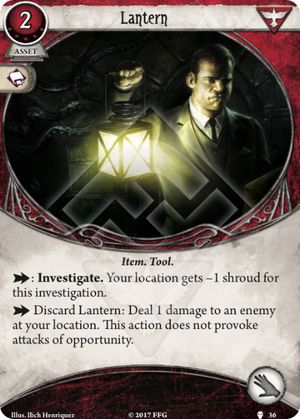 The Survivor's Magnifying Glass. useful to a clue minded investigator who needs something to do with his/her hand. The net effect of +1 is not always a worthwhile bonus but depending on your character and other cards you may stand to gain a lot if you can hit the magic numbers (2 above the difficulty for Standard, 3 for Hard). Wendy Adams can put this to use till she gets her Lockpicks, the other survivors all suffer intellects of 2- or preferable alternatives. For them Flashlight is a better pure-investigation tool.

But Lantern has an extra use. Automatic damage! Autodamage is always good, a guaranteed dead Swarm of Rats or Acolyte can be absolutely critical, or as a finisher to a foe that you managed to tag with a punch or to end a foe that you've chipped at with a proper weapon. This is the real kicker for this card, say for example you hit someone with a .45 Automatic leaving them with 1 hitpoint, say you wanna avoid some particular tokens in the chaos bag, the Lantern got you covered.

A note unmentioned in a review of this card insofar.

A -1 Shroud value will affect tertiary card effects, by this I mean Double or Nothing, Lucky!, "Look what I found!" ETC.

I.E, if you reduce a 3 difficulty location to difficulty 2 and fail, your minimum value (0) ensures that you can play "Look what I found!" on the test you just failed by 2 points.

Technology decides wars. In Arkham's scope, technology decides which cards are being played and which stay in the binder. There are circumstances in which the old-fashioned Lantern beats the Flashlight. Every character that can include Lantern without spending xp should have a look at the following passages, all other character classes can adhere to the neutral Flashlight.

Let me start to evaluate Lantern's worth on the background of it's main use, as a clue finder tool. Reducing shroud can either have a very powerful effect or a mediocre effect - depending of the final shroud value.

Reducing a location's shroud to zero is the ultimate chance for success, because any result will match the test difficulty of zero. Only the auto-fail token lets the test fail (1 out of 16). Currently (with Path to Carcosa just released) there are 23 shroud-1 locations across all campaigns, 6 of which do not have any clues on them. 17 of 147 locations can be reduced to shroud-0 with the Lantern. As a result, it can not be recommended for the powerful effect.

The mediocre effect kicks in if the shroud is still 1 or more after applying the modificator. Investigating at that location gives you a bonus of 1 on the skill test, comparable with having a +1 Intellect boost on your investigation attempt. While on Hard/Expert mode failure is unforgiving, this marginal bonus is absolutely neglectable, it can make all the difference in Easy/Normal gameplay. Even better, Lantern does have unlimited uses! So, if you play a Survivor in Easy/Normal mode, add Lantern to your deck!

The Lantern also serves as a throw-away combat tool. For one action you can once inflict 1 damage to one target at your location. Not overly powerful, but a decent weapon against Whippoorwills: Lantern absolves you from spending one additional action and executing the skill test.

Synisill · 320
Why is 0 shroud the "magic" number? And how can you guarantee that you can succeed a Shroud 3 via Lucky! or Look What I found? Let's say you have a location with Shroud 3, use the Lantern to lower it to 2 and you have a skill of 3. If you pull a -4 token, you have a net skill of -1. That fails by 3 so neither Look What I found! nor Lucky! applies. — franzel · 22 10/13/17
Nearly, but not quite! Once all of the modifiers are applied in a skill test, any skill value which has sunk below zero then becomes zero. So in your example, you'd actually succeed perfectly well. See the 'Modifiers' section of the rules ref. So this is why in some situations, Lantern is almost (but not quite!) an auto succeed. — Orangerequired · 1 10/15/17
Lucky! wouldn't make you succeed in franzel's example though, right? It would make the skill value 1 against a shroud of 2. Activating Look What I found? would work. — Nils · 1 10/18/17
Yes, Nils, you are perfectly right there. The Lucky!'s effect comes before the result modifiers are applied, if it is not enough to pass the test, it fails. Only Look What I Found! helps all the time against failing against shroud 2. — Synisill · 320 10/24/17
This is the best card for Curse of Rougarou. It does not require engaging the enemy so can deal flat damage. — ArtyomTrityak · 38 11/8/17
"[...] comparable with having a +1 Intellect boost on your investigation attempt" — 11zxcvb11 · 2 1/5/18
"[...]comparable with having a +1 Intellect boost on your investigation attempt." i think that lantern is better than that, since lowering the shround will give you that +1 advantage even in places where you need to investigate using another skill than intellect. — 11zxcvb11 · 2 1/5/18
Does Lantern’s passive ability stack with the Flashlight for a potential -3 shroud? — dragonwarriorfan · 7 1/13/18
No. You must decide which action you are using. Either from Lantern or from Flashligt. — XehutL · 45 1/14/18