If this skill test is successful during an evasion attempt, the next time the evaded enemy takes damage this turn, deal it 1 additional damage.

Only someone who is half seas over would lather up the O’Bannions.
Borja Pindado
The Boundary Beyond #155. 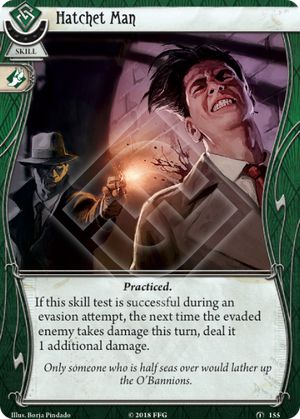 Hatchet Man is useful in two scenarios not listed here: you have Delilah O’Rourke, or your fellow investigators include Rita Young. Card might as well say “for 0 actions, your pal does plus one damage.” Not essential, but in a combat heavy scenario this can help. You could also boost your sneak attack. Perhaps the greatest beneficiary would be Winifred , who already has the dexterity to evade things and loves adding skill cards to tests. And only a daredevil would have the guts to lather up an O’Bannion.

If you build around some of these cards Hatchet Man can be worthwhile.

However, unless you build quite hard around it most of the time I don't think this card is worth the slot in your deck. Situations in which you want to evade first and then do damage just aren't common enough and you'll often have this card sitting in your hand for a while before you can get a chance to play it.

If you've got a weapon out or damage card available you're usually just going to use it to attempt kill the enemy off. If you don't have a weapon or damage card that can deal with an enemy you're more likely going to want to move away or seek alternative solutions after evading.

I think this card deserved another symbol so it was more playable even if you weren't going to get value from the text and you'd more easily consider it over a Manual Dexterity. As it stands you need to be playing the combo cards to make this worthwhile

bobblenator · 360
Hatchet Man is a card I've defended pretty hard for a while. I think it's pretty underrated. You don't have to work that hard to make it work, you have .25 Automatic and Delilah O'Rourke that fit very well into an evasion -> damage build. And it happens to be in the class with the most extra actions, so finding the time in your own turn to do damage isn't necessarily hard either. — StyxTBeuford · 12744 4/26/21
I agree with @StyxTBeuford it’s a good card. The only thing I don’t like about it is it’s only until your turn ends. I’d prefer it just stay attached to the enemy until either it readies or, oh I don’t know, the enemy actually gets hit? — LaRoix · 1608 4/26/21
@StyxTBeuford @LaRoix - Thanks for your views. I missed the synergies with .25 Automatic and Delilah O'Rourke. I agree these synergies give the card much more life and can see good utility in decks that use these cards. I have revised my review accordingly. I'll stand by my view that outside of those synergies it's an mediocre card and you definitely shouldn't put this into most fight based Rogues like you'd put in a Vicious Blow in a Guardian — bobblenator · 360 4/26/21
Well yeah, it’s a harder card to use than VB. In the same way I wouldn’t run Vicious Blow in Carolyn. The card itself is fine, it’s just fits less easily in as many investigators. — StyxTBeuford · 12744 4/26/21
It was very useful in a Winifred deck in War of the Outer Gods -- Hatchet Man on evade (easy because of low evade enemies in that scenario), then Delilah O'Rourke can exhaust (again for minimal resource cost) for a fast 3 damage testless attack. — LivefromBenefitSt · 937 4/26/21
Also it occurred to me you included Cheap Shot and I am not sure why. You cannot commit Hatchet Man to a Cheap Shot test because it tests combat, not agility, and also because the test itself isn’t evasion. — StyxTBeuford · 12744 4/27/21
(In regards to its success trigger) — StyxTBeuford · 12744 4/27/21
works also nice with coup de grace, which i often tend to include because of the icons ( double fists are rare in level 0 rogues). even more so with — schafinho1 · 53 4/27/21
chuck — schafinho1 · 53 4/27/21
1

Cluny · 51
(just commenting because I don't want to review it). Want to try this with Finn/Lupara/Double or Nothing. Seems like a lot of cards for the setup. — bigstupidgrin · 80 1/28/19
Good to know that I wasn't cheating when I defeated a 5 health enemy with Hatchetman+Hatchetman+Double or Nothing evade into Delilah O'Rourke's ability (or something like that) — Zinjanthropus · 212 9/12/20