Place 1 of your clues on your location and exhaust Quick Study: You get +3 skill value for this skill test.

John Pacer
The Boundary Beyond #154. 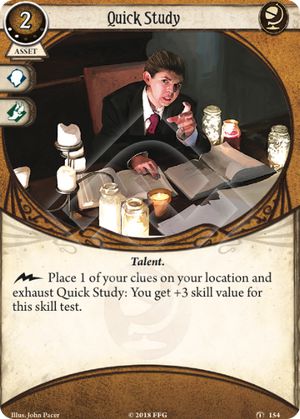 While this is a Seeker card and Seekers mainly have access to it, it is actually not really good for Seekers. And that is mainly because of the existance of Higher Education, but let's see it into it.

So, what kind of tests does a Seeker care about? A Seeker cares about 3 kinds of tests: An Intellect test, a Willpower test and an Agility test. Trying to pass an Intellect test means that you 're probably investigating, so buffing your stat with Quick Study is not helpful as you 're dropping a clue to get a clue. That doesn't make sense. Now, there are those cases where you 're trying to do something else on an Intellect test, like trying to beat this guy, or this ever-hateful thing, or trying to find the solution. In these cases popping Quick Study is good, but Higher Education does the same job just as good, if not better. On a Willpower and Agility test, Quick Study is also good, but the Willpower part is also covered by Higher Education.

That means, that, assuming you 're getting Higher Education, your only stat that is not covered is Agility. Are you going to spend 2-4 XP to get 1 or 2 copies of Quick Study to cover it? I don't think so, it's not worth it. If you care so much about evading an enemy, there are things that can cover this less costly, or more efficiently (not to mention that Ursula Downs doesn't need any of this) and Agility tests on treachery cards that happen every now and then can usually be covered by throwing a skill card or by cancelling them (if you 're Daisy Walker).

And this is actually a great card for Roland! It opens up a whole new line of possibilities for him! First of all, it's a great way to deal with his signature weakness. Roland has a lot of difficulty dealing with Cover Up, when clues are not in accessible spots, or when he has to investigate a high-shroud location in order to deal with it. With this card, suddenly Cover Up becomes a lot less of a threat, as he can deal with it by picking a low-shroud location and popping Quick Study to place a clue on it and do his work. So, with this card, regardless of whether there clues on low-shroud locations or not, you can always deal with Cover Up by investigating those locations!!

Then, there are also other things to account for when Roland runs this card. Roland's .38 Special is a card that cares about having a clue on your location, and, with Quick Study, this card becomes a lot more than merely an upgraded .45 Automatic, as you can hit that +3 a lot more consistently (when you pop Quick Study it goes to +6!!) and other than, that there are also some Seeker cards that care about having a clue on your location. With Quick Study, Inquiring Mind becomes a great addition in a Roland deck and you might even consider Preposterous Sketches (i wouldn't suggest it though)!! Then, Shotgun becomes a viable choice as a late-game upgrade for him, as having tools like Quick Study and Inquiring Mind to buff it further can be pretty viable. Add in a Well Prepareds and Physical Trainings and there you have it: A Shotgun build for Roland!!

Another thing to note is that this card has a beautiful interaction with his special ability. When fighting an enemy and there are no clues on your location, or when you don't care as much about gathering clues, you can always pop Quick Study, drop a clue, then get the clue back after you kill the enemy, effectively netting a free +3 on an attack!!

So, to conclude, Quick Study is a card just for Roland so far. Hopefully, we will see more investigators in the future who can make good use of this card, but as of now, I don't think this card will be seeing a lot of play in non-Roland Banks decks.

matt88 · 2185
This card also has some synergy with Rexx Murphy. If a location has a single clue you can use Quick Study to drop a 2nd clue on it for +3, then if you suceed by 2 you pick up both clues. So you basically get net +1 bonus over all. If you play Rexx with Burglary you can also use it in the same way on a location with 0 clues. Also works similarly with Archaic Glyphs: Guiding Stones. Each +2 you get is an extra clue, so dropping a clue for +3 ends up neting you +1. — Daerthalus · 8 7/25/18
I hadn't thought about those cases with Rex. On the first case I think it's still not worth it because you actually make the test more difficult in a way that instead of having to get just 1 clue you now have to get two clues so you actually have to overcoming. The +3 helps of course but you risk losing one or both clues (on an auto-fail for example). As for the second case, it's not bad to use it with Burglary but you still have to be passing by 2 or more if you want to get the clue back (unless you don't care about losing a clue). Now about Archaic Glyphs I had this case too. Since you get +1 clue per +2 and Quick Study gives you +3 it's not netting +1 clue because you would have to go to +4 for that to happen. So you have to cover that +1 by other means which means expending more "resources". In any case, even if you would somehow benefit from any of these cases spending 2-4 XP for this card does not seem to be worth it. — matt88 · 2185 7/26/18
Sorry for double post, some corrections (I'm writing this on a phone): "...you actually have to be overcommitting..." and "...about Archaic Glyphs, I had thought about this case too..." — matt88 · 2185 7/26/18
Re: Ursula, IME 4 foot is not actually enough to pass most foot tests. You're usually testing against 3 which is awful. Even vs 2 it's pretty dubious. For that reason I kind of like this with Ursula (maybe also a 3 foot seeker like Rex). As an additional benefit to Ursula, it can let you pass most tests where you can't activate Field Work for some reason. Sometimes you do end up with no clues on the board and no clues on your investigator, though, in which case it does nothing (which is a pretty bad weakness of the card). Additionally, if your deck is lacking in economy and card draw (which admittedly is probably an oversight in a seeker deck I guess) this can kind of stand in for Higher Ed. Perhaps also if you were playing with the taboo list. One last (janky) combo is that you could use this to investigate an empty location and then play — Zinjanthropus · 160 2/9/20
Ack! enter key, sorry abou that. To finish my though, you can use this to investigate an empty location, dropping a clue, and then play Crack the Case to get a little economy boost. Ursula with Pathfinder could even do this without spending a click with her free investigate action. Not too shabby, I don't think. — Zinjanthropus · 160 2/9/20
5

Most of the reviews are talking about how this works in someone like Roland but not most typical Seekers - well, there's a new semi-seeker who likes scattering clues around the board.

For Trish Scarborough, this card is very good. Using it in the Mythos phase will boost her to a respectable 5, then prepares your location for a use of Lola Santiago, Working a Hunch, etc, to automatically evade an enemy.

Since Trish is more likely to be a primary clue-gatherer than Roland, this becomes a lot better nearer the end of certain scenarios, when there's no longer a need to spend clues, and you'd rather be evading a big boss monster. But so long as clues don't really matter, and you can make a test that doesn't take an attack of opportunity each turn, you can easily keep a boss monster completely locked down while a monster-slayer partner whales on it. And if it's engaging to them, it becomes even easier - dropping a clue to investigate just to pick it back up and get the evade.

In scenarios where clues never really become useless, or you don't want to drop them on victory point locations, the card has less use - it's still decent encounter protection, but Dr. William T. Maleson can do that job to an extent. But even so, you can generally pick the clues back up, and if you don't need to evade enemies but they're around, you can just use them to pick up clues faster than you drop them.

Overall, it's a good card in Trish, and it's nice to see a niche card find another good niche. Perhaps when/if the Survivor/Seeker is printed, it will be amazing in them too.

Drop a a clue when you fight a monster and regain it on the kill.

Outside Roland though... is the clue gathering faction, an activity for which this card is counterintuitive. Rex Murphy and Ursula Downs can trigger it for to hit a rather decent 6/7, for the rest it's exclusively a booster.

Roland is the only secondary character in the game right now and I think its no accident that its so good on him, this card rewards your clue gathering by increasing your strength in other fields, when a is released who isnt quite so clue focused, a Dr. Francis Morgan kind of egghead, or a new character who is secondary then this will probably be good for them too.

Quick study is a natural upgrade if you have Dr. William T. Maleson in your deck as Trish. Dropping a clue with an aloof enemy means an easier investigate but you still get two clues. Dropping one on an empty square means you can use any number of fast cards to get the clue and evade.

Run this in Roland, Rex or Ursula and become a beast on command. Outside of these investigators, I would probably avoid this card for now.

Although, I love the idea of playing it in Lola Hayes (she IS an actor!) and playing cards like Scene of the Crime and Working a Hunch for clue manipulation. It might even be decent as this would let her do clutch tests at a 6.

This is incredible out of Roland.

When fighting a monster on a location without clues he can use this to gain +3 for the check then recover the dropped clue for free.

If his personal weakness is drawn he can drop a clue on almost any location and hoover it back up with the boost. This is especially useful if all the nearby clues have already been taken.