Fight. Add your to your skill value for this attack. This attack deals +1 damage. If you succeed, automatically evade the attacked enemy. 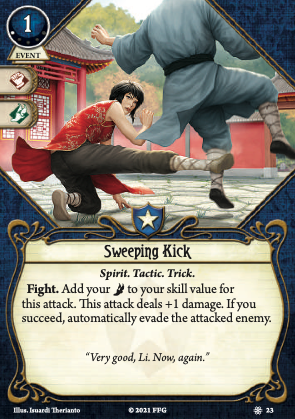 This event seems absolutely fantastic for Rita Young. An attack at skill value 8 is nearly guaranteed to succeed on standard against all but the strongest of enemies. And the auto evade afterwards means you can ping the enemy for a third point of damage or move for free! Not bad for 1 resource and 1 experience.

Also pretty good for Nathaniel Cho. It's a Spirit event, so he can look for it with his Boxing Gloves. There is a lot of competition for card slots in his deck tho.

Cpt_nice · 70
Totally missed that Rita can take this card! Nice!! — MiskatonicFrosh · 139 6/26/21
Good call! Makes sense as this is basically a more powerful version of Cheap Shot, which is already a good Rita card — Zinjanthropus · 209 7/16/21
Mark can also kick at 8 — SergSel · 272 9/11/21
I also really like this card in Skids. Adding his agility really compensates for his medium combat, will probably trigger "Succeed by X" abilities, and the auto evade synergizes with Rogue evasion tech. — DavidRyanAndersson · 47 2/2/22
4

Love this card, so much! Oh man, it's gotten me out of some binds already!

First off, a nice big fat attack with what amounts to an average 6, 7 or 8 to hit, that by itself is a great backup move to rely on. 2 Damage deals with lots of troublesome things on it's own.

Second, for the sake of fighting something big and scary (this guy), pre-emptively evading it is often the safest way to go, this card does that really well, you're chunking down the threat at the same time as you control it.

Lastly, it's actions and health saved. Often the guardian needs to run across the map and pull a nasty monster off of the hapless , or else you might be at a location together, and you simply dont have actions to get the both of you free safely. Sweeping Kick lets you pull your friend out of trouble, no matter how big, and keep yourself safe with minimal risks (beware missing the attack and hitting your friend tho).

Rita, Nathaniel, Calvin, there had been several investigators mentioned, who might be interested in this card, and probably rightfully so. Personally, I got it in Tony playing the "Web of Dreams" campaign, and even though there is no particular synergy with him, I was still very pleased of this card. I think, it might as well be a good card for any investigator, who can take it. With 1 XP and 1 resource, it's reasonable cheap for an event, that can attack for 2 damage and evade even bosses for one action.

However, now that I think of it, there might be somebody else, who gets extra mileage out of this card: Zoey Samaras

If she has her Cross out, she can do one damage while engaging, sweeping kicking disengage it again, dealing another 2 damage. And then in upkeep phase, when the cross and the enemy ready, deal an additional damage to it. That's basically 4 damage in one action, not counting additional damage from Vicious Blow, Beat Cop, what have you. You could also say, this card doubles the damage output of the cross on an enemy without requiring any additional action. (Assuming, you don't fail the test.) Of course, it will exhaust the cross for the complete next round in advance, so you might miss its ability then on some other foe. But it's dubious, if you will even get that new enemy, you could profit from the cross again, so if it saves you a complete action, or 1 point of health on your Beat Cop, etc., that's still a synergy to look out for. Sure, her is not great, she only attacks with a base of 6 on this card, but with some static boost and commits, she certainly has no hard time using it. It's still 1 base skill better than most level 0 weapons, and they are certainly not unplayable for her.

Susumu · 220
Its very good for smoothing out your Combat strategy. Rita is the Queen of this, but generally speaking going for racking n a — Maseiken · 1 5/26/22
*racking up small-middling damage while keeping enemies at arms length is a solid strategy — Maseiken · 1 5/26/22
$3 to use it and the cross twice! — MrGoldbee · 1265 5/27/22
Yes, the fact, that it is so cheap, makes it so powerful. It's half the price of Spectral Razor, which could also do 3 damage. With a different restriction: not against elites, but independend from if the Cross is out. But since elites are the most likely to stand a round vs. Zoey, there is extra value in that even, too. You get a free "Dodge" out of it. (Or even multiples, if the enemy is massive.) — Susumu · 220 5/27/22
(Spectral Razor of course also being a very good Zoey card, due to engagement option and base skill of 8.) — Susumu · 220 5/27/22
2

This card is good Survivors with high agility like Rita, who likes this for her passive, or Guardians who take it for the occasional evasion to get an engagement break to play the next big beatstick.

For me though, this card really shines in Calvin. Since he boosts both Strength and Agility in equal measure, a base skill value of 6 or higher is easily achievable even in the early scenarios of a campaign.