Fight. For each different class among cards you control, you get +1 and deal +1 damage for this attack.

"You mess wit' one of us, you mess wit' all of us!"
Patrick McEvoy
Edge of the Earth Investigator Expansion #22. 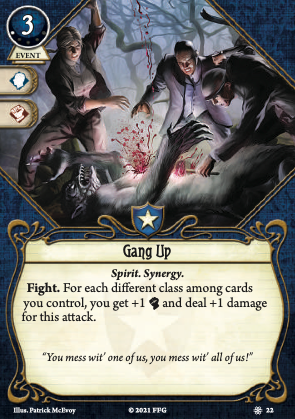 This card is absolutely wonderful, even on hard, if you’re willing to sit on it a bit. Unless you’re Lola, you already control one class card, your investigator card. And with Edge of the Earth, there are a few of triple class cards that get you to 3. Double class cards are available, even for level zero. Also useful: having teammates who can play things for you (like Bob).

My favorite option is the investigator who can play cards from any class, as long as they heal horror. With Peter Silvestre, illicit alcohol, and the scroll of secrets(0), you’re there. (There’s also Shrewd Analysis, which is vital if you’re doing the ancient Stones trick. Easy!)

With your tableau set up, you can swing a +5/6 damage brutalizer for the extremely reasonable price of three resources. Overpower or promise of power can get you to ridiculous numbers. In duo, this can kill tough enemies. In a larger group, it can supplement your dynamite as a boss killer. And late game is when bosses typically show up!

Fear actresses and therapists, because they have many friends.

MrGoldbee · 1315
I don't think there is any setup on for this card. — david6680 · 43 10/27/21
According to https://arkhamdb.com/rules#Ownership_and_Control you control all the cards in your hand, deck and discard pile. — david6680 · 43 10/27/21
While you do control those cards, card abilities only interact with cards in play unless other areas are specifically referenced. Sothere is abit of setup. — TastyToast · 150 10/28/21
Technically, you can add Shrewd Analysis without any viable card to upgrade, so whether or not you're doing the ancient stones trick, Carolyn can do it. — Lailah · 1 1/14/22
Indeed. And she also always can add Arcane Research, which has several viable targets (Deny Existence, Clarity of Mind, Earthly Serenity, Blood Eclipse), and having a couple of horror to heal on herself from turn 1 isn't necessarily bad on it's own for her. So she can always fight with 5 combat for 4 damage. 5 combat is not enought for most enemies. She would still need cards to commit or a "Keen Eye". But 4 damage minimum is awesome. And like said, she can push the card's use even further with just one rogue and/ or one survivor card in play under her control. — Susumu · 271 2/14/22
2

This card is bad with Lola (its like they don't want her to be viable), but is extremely good with Charlie, especially late game. Charlie can very conceivably have a card from all classes up given his extremely diverse card pool (e.g., typical pick is guardian and survivor for his card class. In an enemy handling deck, you could then grab David Renaut, Delilah and a Med Student. You now have all five classes in play).

That translates into a +5 attack that does six damage, a serious boss killer card.

As others have said you're going to want to sit on this card a bit, especially Charlie, to get the full effect. But once you've got a rainbow assortment of allies on the table, fire at will and watch the cackling politican send his army of free lancers into the boss' maw.

drjones87 · 107
With Charlie it is especially flavor-accurate as he literally has his gang instead of just amount of class Synergy from other physical assets.. — 5argon · 3368 12/1/22
1

I'm not a big fan of the "by our powers combined" set, but I'll grudgingly give credit where credit is due, this is a good but expensive card.

3 Cost is steep, this is the major issue for this bad boy, but here's what you get:

First up, it's a fight action, so 1 damage base, that then means that with just 2 classes in play it's a 1xp, 3 cost attack at +2 for 3 damage. If you could take a 1XP Backstab with a +2 on it, people would most definitely do that. Already ignoring the whole setup thing of gathering all the classes, even with just 2 classes in play, the usual minimum a character can muster, this card is playable.

Everything on top of that is gravy. Do you manage to plop down a third class via a Dual class card? A fourth class through judicious dual class design or a triple class card? Are people trading cards with Black Market, Bob Jenkins, Teamwork or similar effects? The third class is relatively easy, Enchanted Blade by itself will get you a third class for most characters. Remember that your character is a card and it's included, so if a dude like "Skids" O'Toole plops down Enchanted Blade that means you've got 3 classes in play for an effective +3 and 4 damage and that right there by itself is gold. 4 Damage attacks are rare and powerful and worth the hoops to jump through for.

Can you max it consistently? That'll be rare. But a partial trigger for just +3 or +4 damage is excellent.

Tsuruki23 · 2350
Hi ! Like david6680 said in the previous reviews . It seems that you don't need to "setup", you control all the cards in your hand, deck and discard pile. ( https://arkhamdb.com/rules#Ownership_and_Control ) — Yopiman · 1 6/10/22
While you do control all cards in your hand, deck, and discard pile, cards only interact with other cards in play unless they specify on the card (see Ability in the RRG) so I'm afraid you do need to do set up, unless you have permanent for each of the classes. — NarkasisBroon · 10 6/10/22
This is also the reason that if a treachery card says "discard an asset you control" you can't just look in your deck, find an asset, and discard it — NarkasisBroon · 10 6/10/22
I don't understand why this is still confusing some people? The rules are very clear about what card text can interact with, and it's the exact same language on cards like Whitton Greene, which no one is confused about. I really don't understand where this is suddenly tripping people up. — MiskatonicFrosh · 252 6/20/22