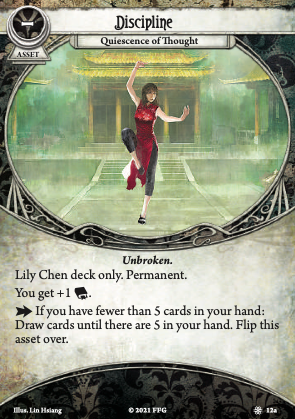 After the round ends, if your hand did not have 2 or more cards in it at any point this round: Flip this asset over to its Unbroken side. 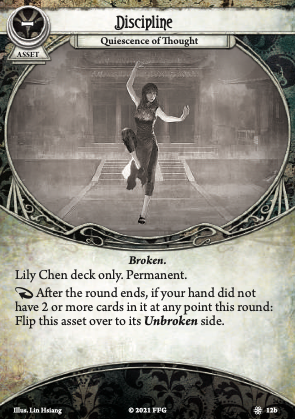 Probably the least popular first pick Discipline, but I’ve found in the context of solo/2p, to be the best choice to build your starter deck around. The reasons are laid out below.

Firstly, in solo/2p, versatility is greater valued as a deckbuilding goal, and I argue should even be slightly biased towards clue discovery, no matter your chosen character. 3 Intellect is the reasonable spot where you can start investigating right off the bat (assuming Standard, Hard/Expert solo/2p needs different deckbuilding considerations), especially in earlier campaign scenarios where the shroud values at or around your starting location tend to be 2-3.

Compared against a +Willpower Lily build who needs to hard mull or draw/Arcane Initiate into either of her 2x Sixth Sense, a +Intellect Lily can more reliably start pulling clues early, especially with some support from a good range of cards such as Flashlights or pitched icons.

Secondly, this Discipline’s draw power has the highest potential in terms of game impact. In solo/2p, you can’t rely on other investigators to cover for you while you draw into your dream min-maxed combo. Quite often you got to deal with whatever the obstacle is yourself, which can range from show-stopping Arkham nonsense such as a Locked Door, to a stubborn enemy that just spawned on you while you aren’t “ready”.

The +WIP Discipline healing ability is a nice to have ability, but its scope to bail you out of a bad situation is extremely narrow. The +AGI combo ability is cool to pull off, but honestly if you already have the setup to have a reasonable shot at 3 different Fight/Evades, it’s more of an icing-on-the-cake-cool-to-have but not absolutely game saving ability, and is only limited to getting you out of bad situations involving enemies. The +STR Discipline’s AOOless +5 is pretty flexible, but I would argue the ability to draw into potential high-impact out options such as a Promise of Power or Spectral Razor in an emergency, has better value in solo/2p. Even better, this Discipline’s ability gets stronger the more desperately you need it, when you have lesser cards/options in hand, and just need something to quickly stabilise yourself.

Lastly, you probably won’t use the ability more than a couple of times each scenario, but if you do, it’s when you are desperate. Don’t be greedy and wait for when you have no or 1 card in hand, pulling for 3 cards or more in 1 action is already pretty good especially in a Guardian/Mystic.

All in all, do consider this as your first Discipline the next time you build for solo/2p Lily, and try a deck that is built around the ability to replenish cards the quicker you use them. Skill cards, fast abilities, cards with a versatile spread of icons, gain value in such a deck approach. Which, I would argue, dovetails nicely into the deckbuilding considerations for lower player counts.

Sojourne · 80
You have the unbreaking condition backwards. It doesn't flip "if at any point in the round, your hand had 1 or fewer cards in it", it flips if you hand *never had* 2 or more cards in it that round. — Thatwasademo · 44 2/1/22
I think you're misinterpreting how the unbreak works. You *could* parse "did not have 2 or more cards at any point" as equivalent to "did have 1 or fewer cards at some point," but there are easier and more straightforward ways to write that. I believe that if you did have 2 or more cards at any point, it doesn't unbreak, which means it never unbreaks on the round you use it. This would be consistent with the design of the other 3 disciplines, all of which are guaranteed to stay broken on the turn you break them. — OrionJA · 1 2/1/22
Ah looks like I played one campaign wrongly then, but I don’t really think it changes my underlying argument for this card. You will likely trigger the ability only once a scenario, especially in solo/2p where it’s more a race to get through the Act deck quickly. In terms of ability to reverse a bad situation, this discipline’s trigger still beats the rest. — Sojourne · 80 2/2/22
Plus I usually hit this ability for 3 cards anyway, as 2 cards in hand is usually when you start looking for more options. — Sojourne · 80 2/2/22
3

Flipping this back is trickier than it sounds. It is a 2 turns process, because before the round ends, you must always draw 1 card. Unless you get a weakness, "after the round ends" will already had passed a process of drawing 1 card.

The only kind of round you can flip back is that you must first start the round at 1 card, use it up somehow in treachery test or inside your turn, then draw a new one to 1 card right before the end of round. (= Did not have 2 or more cards at any point.)

In other words, "if your hand did not have 2 or more cards" can be interpreted as : "You must make your hand 0 card at the end of turn, for 2 consecutive rounds."

5argon · 1904
It should actually be interpreted as "You must make your hand 0 cards by Upkeep Phase". You can go first, and if you choose your cards wisely during deckbuilding, you can commit your cards away to your teammate's skill tests even if you cant play them all — chirubime · 18410 2/5/22
I wonder if it's even worth it to force an unflip to the ready side. I would read this card as "Once per game, you can replenish your hand to have 5 cards. Until then enjoy a +1 book boost. Be extra happy, if you draw your Elder Sign afterwards." — Susumu · 234 2/6/22
Yeah it is, but more often than not the value of an action for a 3+ card draw in a single action far outweighs a +1 Int bonus. — Sojourne · 80 2/9/22
2

Something that I haven't seen mentioned yet in any discussions about this card is its cheeky interaction with her signature Weakness (which she may have up to four copies of). Drawing cards and flipping the asset are two discreet sentences and in that order. Thus, if you draw Burden of Destiny, this Discipline will still be Unbroken and a legal target for the weakness. Since it was about to flip anyways - you lose nothing further by choosing it!

The 'cannot flip back this round' clause on Burden of Destiny does mean that the second step doesn't immediately reset the asset to Unbroken, which prevents this from reaching cheese levels, but it otherwise isn't a concern as the discipline wasn't going to flip back at the end of the round anyways (on account of drawing up to 5 cards).

Death by Chocolate · 1229
It is an Action to draw cards. There is no window to draw the cards after drawing the weakness, — fiatluxia · 51 3/1/22
What DbC says: if you draw your weakness among the up to 5 cards from activating this action. If you draw multiple cards from a single ability, they are always considered been drawn simultaneously. — Susumu · 234 3/1/22
Yeah, the interaction isn't somehow activating Discipline (Quiescence of Thought) between drawing Burden of Destiny and resolving its revelation effect, it's drawing Burden of Destiny as one of the up to five cards activating this Discipline makes you draw, then resolving its revelation effect before finishing resolving the activated ability. — Thatwasademo · 44 3/1/22
That's by no means guaranteed to happen, but it's worth keeping in mind that if it does happen you get to deal with one copy of Burden of Destiny for free (if you draw more than one, they can't all flip this discipline) — Thatwasademo · 44 3/2/22