Revelation - You must either (choose one):

- Flip a Discipline you control to its Broken side. It cannot be flipped back this round.

"How can I save them if I can't even save myself
Edge of the Earth Investigator Expansion #15. 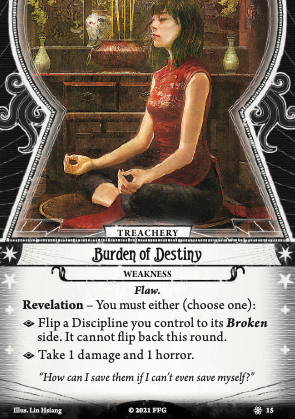 A hard to evaluate weakness that leans more into the investigator's mechanics than her flavor. Looking at the two elements, the effect and the discard condition, we get:

The effect: You either break one of Lily's Disciplines, or you take a damage and a horror. Neither of these are terrible; it's usually more annoying than difficult to flip a Broken card (with the notable exception of Quiescence of Thought, and even there you might draw the ). Losing the bonus or a use of a Discipline's power might cost you tempo or a test, but it's not too likely to cost you a scenario. Similarly, with the card pool, Lily has access to soak and healing to handle a couple of its. The problem is that. as you build up XP, you get more of these. One is pretty trivial, but drawing a couple in close succession might put Lily in jeopardy (although less so than Thrice-Damned Curiosity or Shell Shock. Additionally, they cause increasing dead draws, especially in scenarios that like to put extra weaknesses in the deck. In The Path to Carcosa, if Lily is lead investigator, she could easily end the campaign with a 37 card deck, 7 of which are weaknesses, and Lily doesn't have a lot of card draw in her classes, and usually has a moderately large rig to get out before she really shines.

The discard condition: Make your decision and then discard it; unfortunately, you probably have 1-2 more copies waiting for you.

All in all, this is a below average signature weakness, more likely to annoy you and slow you down than really capsize a campaign.