Revelation - For every 2 damage on you, take 1 horror. 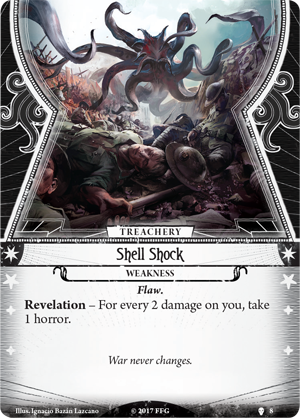 This may seem scary because it targets Mark's sanity, which is low. But I think that, on balance, this is one of the mildest weakness any investigator has. I would never trade this for Cover Up, The Dirge of Reason, or even Smite the Wicked were the option available.

Of note here are a few things:

1) Since it says "for every 2 damage," Shell Shock rounds down. 1 damage on Mark = 0 horror from Shell Shock. The great majority of the time, this card will deal 0 or 1 horror. Not scary at all.

2) Mark was already incentivized to keep the number of damage on him to a minimum because of how Sophie works. 6+ damage is the point at which Shell Shock starts to get awful, but Mark can avoid ever getting into that position. He should be aggressively killing monsters before they attack him, he should run healing cards, he should be playing assets to soak up damage for him, and he should be judicious in his usage of Sophie. If you're playing Mark sensibly, it's very rare that Shell Shock will deal more than 2 horror.

3) Shell Shock is extremely predictable (unlike, say, Final Rhapsody.) You know exactly how much damage it would do if you were to draw it. That means if you're ever in the death zone for Shell Shock you will know that ahead of time. You or a teammate can then heal some damage and/or horror (and most Mark decks are full of cards that do this), or Mark can play an asset that soaks horror.

4) Shell Shock doesn't deal direct horror (unlike Abandoned and Alone). All Mark decks are going to want to play horror-soaking assets, and quite possibly two or more of them. This means Shell Shock can still be manageable even if Mark has accumulated a lot of damage.

5) All in all, Shell Shock is one of the most likely of any player weakness to be discarded for no effect (other than wasting a draw, as all weaknesses do) or a very minor effect.

sorry not a review, but a question concerning the term: "damage on you". does it only refer to the damage on Mark´s investigator card or to damage on all cards you control? I´ve searched a bit around, but didn´t find a definitive answer. maybe didn´t look in the right places. Is there an official ruling? Thank´s for helping!

One of the "take a bunch of damage and.or horror" signature weaknesses. Looking at the two elements, the effect and the discard condition, we get:

The effect: You take 0-4 horror, which is unlikely to kill Mark, but it can lose a scenario or campaign and getting Mental Trauma just increases the deadliness of the card. Fortunately for Mark, Guardians have gotten better healing options since Carcosa, and tools like Hallowed Mirror, Second Wind, and even Thermos can help keep Mark's damage low, and there are plenty of Guardian Allies with 2-3 Horror soak to keep Mark on an even keel. If you don't go wild with Sophie before this Weakness drops, Mark will probably be OK. Good thing it doesn't say "direct horror." As a side note, something in the wording of the card rubs me the wrong way, but its meaning is clear.

The discard condition: You draw it, it's Revelation effect happens, you discard it. Simple, but it can happen multiple times, if you deck yourself.

All in all, this is a below average signature weakness. It can ruin your day at the wrong moment, but if you build and play with it in mind, it is unlikely to have a severe impact.

LivefromBenefitSt · 707
I'm liking most of these reviews so far, but the rating scale continues to confuse me. Below average? I can't see "take half of your sanity in horror" being one of the minor weaknesses. I'm not saying it's a nightmare, but if your investigator actively needs to think about when their weakness might show up, that's average at worst. — Hylianpuffball · 11 1/31/21
Mark tries to keep his damage low for Sophie anyways, in practice I rarely take more than 2 horror from this card, and like the review said, Mark should always have soak through an ally pretty much. This is definitely one of the more minor personal weaknesses given how often it does nothing. — madhatter152 · 5 2/1/21
My rating, which I will admit is pretty crude, is on a scale Way above average, above average, average, below average, and way beloe average, with "Way above" being the worst. It's based on a couple of factors, mostly, -- how easy is it to manage and how likely it is to lose you the scenario/campaign. — LivefromBenefitSt · 707 2/1/21