After you commit Promise of Power to a skill test, add 1 token to the chaos bag. If you cannot, take 2 horror instead. 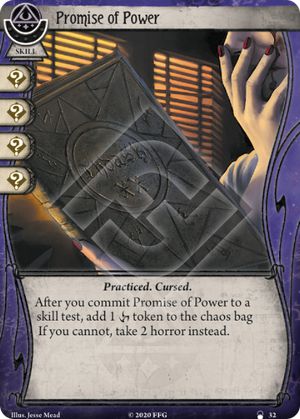 I've run Promise of Power in a couple campaigns now and I've been really impressed. I don't think you need to have any Curse payoffs in your deck to happily play it. It's just a good deal in its own right.

I think Promise of Power is considerably better than Unexpected Courage, especially on higher difficulty levels. Getting +4 to any test for any investigator at your location is premium--compare cards like Rise to the Occasion and Inquiring Mind, which (in my opinion) feature much larger downsides, while only giving +3! With a +4 bonus, even when playing on Expert, you have a real chance at passing a skill test in a weak stat. That's a nice impact for one card, and something like Unexpected Courage is simply not powerful enough to achieve this.

The Wild icons provide a welcome element of flexibility to Mystics who are otherwise focused only on Willpower. Scenarios often feature important non-Willpower tests, which can be awkward for hyper-specialized Mystics. This card is a great answer to that, and of course also has the flexibility to help allies cover for their own weaknesses.

Moreover, a single curse token in the deck is a very small cost. There's a very high chance that it gets discarded on a test that passes anyway (or, less probably, on a test that would have failed anyway.) I will happily take a large bonus to my skill test right now, when I know the test is important and I know the bonus is useful, in exchange for a smaller penalty later, which might come up on an unimportant test, on an important test that I committed a lot to and therefore can succeed on anyway, or simply not come up at all.

Finally, this is Practiced. That's very relevant because Practice Makes Perfect is a great card, significantly above the curve for a level 0 card and well worth building around. Together with Deduction and Perception, this makes a really nice package for investigators like Amanda Sharpe and Daisy Walker.

CaiusDrewart · 2425
I never considered the downside of "Inquiring Mind" that big. Sure, it might jinx you to not be able to commit it on a test, you really want to, but there will come others, where it will still be very useful. I think, what makes PoP bonkers good is, that it provides a lot of wilds for PMP. Practiced wilds normally come in singulars, like in "Momentum" and "3 Aces". Exceptions are rare and either very restrictive like "Take the Initiative", or very XP-expensive like "The Eye of Truth". Now with PMP it's kind of unfortunate, if you are doing an investigation test and dug up an "Overpower", because it wiffs. That's why Wilds are so much better with PMP, and why I considered Rogue-Mandy the best Mandy, because with "Momentum" and "3 Aces", she will always find a suitable card with PMP. Now with POP this might shift to Mystics. She can still include "Prophecy" and "Plan of Action" to increase the number of eligible wild targets, but without POP they would have just been inferior to "Momentum" and "3 Aces".. — Susumu · 150 3/5/21
Hi Susumu, I agree that Inquiring Mind is a good card (see the review I wrote of it a few years back.) It was perhaps a bit misleading to lump it in with Rise to the Occasion, which is generally a bad card that only becomes good for one or two specific investigators. That said, while I like Inquiring Mind and often run it, I think Promise of Power's drawback is preferable, even discounting the other advantages of the card like the higher bonus and the Practiced trait. Yes, it's usually true that even if you can't commit Inquiring Mind at a particular moment because your location is clueless, you can find a good use for it later. But there are a fair number of scenarios where the clues all get scooped up but there are still some final tasks to do, and Inquiring Mind can sometimes go completely dead. — CaiusDrewart · 2425 3/5/21
Your point about Mandy is interesting. I didn't mention her in the review because I assumed this card was not enough to dethrone Rogue Mandy as the best option, but perhaps so. I haven't tried it. — CaiusDrewart · 2425 3/5/21
I have not tested it yet, either. But this card lets me want to test out a Mystic-Mandy. I think, it might be enought to catch up with Rogue-Mandy, because really, the wild practiced skills were, why I picked that off-class for her. — Susumu · 150 3/5/21
And it was also more of a general point: Mandy will not run "Overpower" anyway. But while you can run PMP with distinct icons, it's IMHO true for any investigator, that wild skills are premium for this card, for reliability. — Susumu · 150 3/5/21
Any card with Practiced is worth considering just for PMPs efficiency. Promise of Power makes the cut over most of the skills mentioned here for that reason on top of the 4 icons being incredibly flexible and strong (and as mentioned you will often pull a curse on a test you would’ve succeeded or failed anyway). I agree that you need no curse removal or tech or anything to justify this card, it’s just good in its own right. — StyxTBeuford · 12490 3/5/21
I actually kind of dislike using PMP with PoP, since most of the time you don't actually need all 4 icons when you're playing PMP, so it feels somewhat wasted (and you still get a curse). PMP decks also tend to run also skill heavy, and skill heavy decks don't like curses all that much, since there's slightly more at stake with each test. — suika · 7725 3/5/21
I think those are both totally valid points suika, but ultimately they're not important enough to make me dislike this combo, since the curses (even if you get 2 playing it off PMP) are just so minor. If you hit PoP and other Practiced skills, you can often choose something else instead if you feel +4 isn't needed. And hitting PoP is still definitely a lot better than hitting nothing. — CaiusDrewart · 2425 3/5/21
Agreed, but it does mean I won't count PoP as one of the practiced skills in my deck for the purpose of PMP, so that there's a good chance to choose something else. — suika · 7725 3/6/21
Rather I think PoP allows you to use PMP for tests you might otherwise not be as confident in passing. I think it’s still an excellent PMP target for that reason. — StyxTBeuford · 12490 3/6/21
For the price of 2 curse tokens instead of just one, you can also use PMP to "fish" for PoP. The first use might be slightly wasted, but you get it out of your deck into your hand for the use, you really want it. Of course, there is always the chance to loose it, if the PMP test results in a tentakle. But that's a risk, I like to take on "The Eye of Truth", and I don't see that much difference here. Of course, if you find another practiced skill, you can commit, you can always take that one instead. — Susumu · 150 3/7/21
3

A promise is a bridge to the future built on faith.

Promises are easy to keep if you know what will happen.

Jacqueline Fine can give you three options, or a bad option with no chance of automatic failure.

With this promise, she can evade the cagiest enemies, punch the deadliest foes, or pass truly remarkable literary challenges.

If she’s recalling the future, those heights go from extraordinary to ludicrous.

Perhaps you’ll fail a future challenge because of a promise. But as you draw three tokens, more than any other mystic, failure comes on your terms.

MrGoldbee · 1080
As an avid Jacqueline Fine player, I will not use this card with her. One thing I learned about Jacqueline the hard way - she hates adding unnecessary tokens to the bag. I played her alongside Sister Mary once, and when she drew her weakness, I was stuck with it for 5 rounds. Never before have I cursed at seeing so many blessed tokens. — eapfel · 5 1/12/21
1

This could've had 3 Wild icons and still be amazing. Just compare it to Prophesy; it's pretty absurd. Hell, we could probably stretch it to 2 Wild icons since it's Practiced and interacts with Mystic spells but then it'd go from amazing to ok since Unexpected Courage is a thing. BUT THIS THING HAS FREAKING 4!

Nenananas · 181
At 3 wilds I start to look down on this card actually. The curse is a -2 that will crop up unexpectedly until you get Curse mitigation like Favor of the Moon or False Covenant, and that -2 has a chance to matter significantly. Because the curse pull is relatively random, it means at 4 icons you're doing better than Unexpected Courage on average (sometimes the curse matters, sometimes it doesn't), though you could burn yourself here trying to overcommit even more while trying to dodge a curse that never shows up. Also consider that most Mystics use willpower as their main stat, so wilds aren't so necessary when your deck is mostly willpower pips anyway. At 2 icons this card is really only useful in a strategy that is begging for curse tokens, and even then I think Guts easily beats it in most decks that would take it. 4 is a bit pushed but it seems just right to me, and it works well as a one off evade or investigate even in low intellect and agility Mystics. — StyxTBeuford · 12490 6/4/21
1

This card is very strange. 4 icons is a lot. 4 icons is amazing. However, it happens to also be a Mystic card, which means the wilds are mostly going to act like pips. Adding a curse token to the bag is not that steep of a price in my opinion, especially if you're leaning into it with maybe one or two other cards that let you mitigate or benefit from curse tokens, though it remains to be seen what those payoffs are. Either way, 4 icons is a lot, and it can even be used to help evade if you don't have a good spell in play.

Realistically I see this as a staple for Amanda Sharpe. All of her stats being at 6 is amazing. Sure, she'll add up to 3 curses to the bag that turn, but that might actually be a good thing, again depending on the payoffs for curse tokens. Patrice Hathaway also likes it, as she's already happy to commit all of her cards in a turn, and this is just a very easy one to throw down.