When an investigator at your location reveals a token during a skill test, exhaust Blasphemous Covenant: Treat that token's modifier as +1 instead of its normal modifier. After this test ends, return that token to the chaos bag.

Tiziano Baracchi
In Too Deep #113. 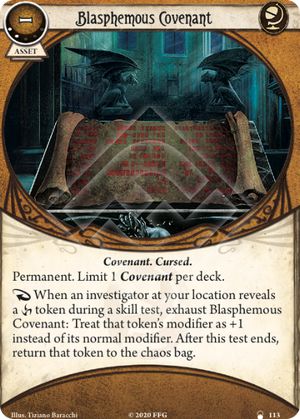 While the Ancient Covenant makes Bless tokens better but doesn't preserve them, this significantly improves Curse tokens (effectively a +3 to the skill test) but puts the token back into the bag where it can be drawn again (if immediately, blasphemies may occur, which seems only appropriate).

Is this a good card? Maybe? If the bag has a lot of Curse tokens in it, this only briefly and weakly addresses the problem. With only a few, it probably hedges a roll. We willll have to see the entire Curse token tech suite to know for sure.

LivefromBenefitSt · 755
I think it helps to translate the Cryptic grimoire: you add [cursed] tokens in the bag as quick as possible but if you reveal them during tests, they are removed from the bag. With Blasphemous covenant, you improve your chances to keep them in the bag. — AlexP · 164 9/27/20
Maybe? That would be a pretty focused use for a Permanent, though. I'm definitely anticipating the new mechanics to see how this all works (even if the tokens won't feature in scenarios outside of the Innsmouth Conspiracy. — LivefromBenefitSt · 755 9/27/20
It seems virtually certain at this point that curse and bless will be driven almost entirely by investigator cards and hence feature in any scenario. — Whitemage · 3 10/9/20
And you have to draw another token, which may as well be the blasphemes tentacles, damn it. — rexhaha · 1 10/13/20
I think it's been suggested that Bless and Curse will only appear in Innmouth packs, since they would have to reprint the counter set for players who hadn't bought TIC. — LivefromBenefitSt · 755 10/19/20
Better in solo! — MrGoldbee · 1103 10/26/20
why is this better in solo? — Makaramus · 4 11/20/20
Ancient Covenant indirectly helps preserve blessings by preventing them from colliding. — OrionJA · 1 12/28/20
Fewer tests — MrGoldbee · 1103 12/30/20
Yeah, in solo it might be close to "curses are just another +1". — Nils · 1 1/31/21
Do you still pull another token after reveling a curse token with this covenant in play? — hun · 1 3/7/21
@hun Yes, you'll reveal as many tokens as necessary for the skill test to resolve. You put this particular token back in the bag after the test ends. — SGPrometheus · 563 5/17/21