Discard Relentless: Gain resources equal to the amount of damage on it. 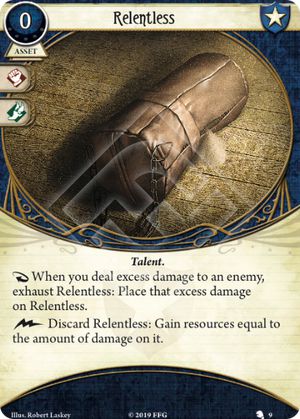 So, its important for a review of a card to address the merits and detriments of a card, so lets get that out of the way. As an economy card, we have to compare it against the OG Emergency Cache. In order to get as many resources for the same number of actions, it has to absorb at least 3 points of overkill - that is a LOT of 'wasted' damage. It also takes time to reach that level of overkill, unless you're going all in with Shotgun or hitting a Swarm of low health enemies with Mk 1 Grenades, Dynamite Blast, Storm of Spirits, etc. (and pushing forward all the excess damage to super-overkill the host). If you draw it late in a game, you might not have enough overkill opportunities left, and unlike the Cache, you can't find this early with Stick to the Plan or Backpack.

Much of the time this can be slow, awkward, and potentially weaker ECache. It has a couple skill pips for a flexible commit in a pinch, but otherwise its worst case scenario value is much worse, but its best case is, at least in theory much better. Letting a roguish fighter with a boomstick (Sawed-Off or otherwise) Double or Nothing to blow an enemy to smithereens and walk away with a juicy payout. However, in this case, you're probably just better off using "Watch this!" and getting enough.

However, there are three Guardians who deserve special recognition.

William Yorick likes assets. And 0 cost assets that he can easily get into the discard and have as an option for his ability regardless of current finances or available slots? That's pretty tempting. Plus, do to his recursion capabilities, Yorick isn't faced with the standard conundrum of when to brake his piggy bank - because he can do so in a free trigger window just before fighting an enemy that'll let him buy it back immediately.

Tommy Muldoon's signature weakness Rookie Mistake shuffles itself back into his deck if it doesn't trash anything with health or sanity on it. Because of its wording, Relentless is a rare asset that DOESN'T have health but CAN have damage on it. So while it'd never synergize with Tommy's ability, it IS vulnerable to his weakness. Depending on what you want Relentless for, this could be an awful downside, or a spicy bonus. I choose the latter because it isn't that hard to get into play and get at least one damage on it as bait for his weakness. Of course, the weakness hits ALL of his damaged/horror'd assets, so you still have to play around that, keeping your assets fresh, and getting them hurt/defeated in bursts, but that's how you wanted to play him anyways - keep one thing vulnerable and protect the rest. Relentless provides vulnerable bait that doesn't take up any of your valuable slots.

Last, but certainly not least, is Mark Harrigan - the Guardian's guardian. His special ability triggers whenever 'damage is placed on a card you control' - that's right! Dealing overkill damage 'places damage' on Relentless and triggers it! This gives Mark two major benefits. First it gives him more opportunities to trigger his ability to draw cards, perhaps even more times per round if using tricks to deal damage fast outside the investigator phase (such as with Dynamite Blast. Second, it gives him triggers of his ability without HURTING him!!! Normally the downside to triggering his ability is he and his assets now have less health left for further punishment, but Relentless actually has inherent BENEFITS for taking more and more damage! As if Mark wasn't already a great contender for Shotgun builds, between Practice Makes Perfect and Overpower granting a lot more card advantage and reliable boosts. Relentless supports with even more refill, and turning wasted overkill into BOTH cards and resources.

And I can't talk about weird rules consequences of this card's wording without taking a moment to acknowledge Solemn Vow. If you... really wanted to... you could use someone else's Solemn Vow to move damage OFF of your Relentless and put it on one of their assets with health. Outside of niche situations of killing off a doomed Mystic ally when nobody else is hurt, I haven't thought of a good use case for that. Note that you cannot use Solemn Vow to move damage TO Relentless because it doesn't have health and thus can't have damage put on it (except by its own ability which explicitly says to do so and overrides the general rule via The Golden Rule) the same way that Archaic Glyphs can put secrets on itself with its own ability but can't have them added via other cards.

Edit: Oh, I guess I missed that you can also save the damage to give it back later if you somehow haven't taken any yourself...

The basic idea of this card in a Cho deck warrants pointing out I think. Cho always wants to use events to damage stuff to pop his ability. Sometimes all you have are events which deal more damage than necessary, but you couldn't deal enough without them. Relentless lets you pay into those overkill events, making sure you get the kill without "wasting" the extra damage output. Thematically, you're giving a good show and bringing home extra cash from tips or bonuses or whatnot.

It also lets you pop your trigger at points when it's not necessary to do so in order to get the kill. Since it's once per phase, it'll be ready for the enemy phase if you do. When you have enough events to kill a baddie sufficiently, just trigger your ability and you've banked another resource essentially.

The discard is a downside for sure. Would be nice of course to just exhaust it and pull money from it but oh well. It's probably balanced as it is.

For it to be worth it, you need at least three resources to equal an emergency cache (which is upgradeable as well). It does give you freedom to overkill and overspend on events without wasting it though, so there's extra utility. Plus it's simply thematic, so even if it's equal or slightly worse than ecache, it's still fun.

I haven't played extensively with this yet to judge actual play, but I wanted to point out the obvious for it, especially since this is from a deck for beginners anyway ^_^

inches · 11
It is incorrect to say that it needs 3 resources to equal ECache because the cache gives the cash NOW, and the ECache doesn’t until later. And from my experience with Cho, you really don’t want to waste an event just to get his bonus damage and turn it into money since you need those events to last you the entire scenario. It wasn’t that hard to kill everything cleanly with events since most will do either two or three with his ability and boxing gloves plus 5 fight means he can very comfortably make basic fight actions for those loose 1 damage differences. — Death by Chocolate · 501 10/30/20
I thi=ought about adding this to my Cahinsaw Yorick deck, but (at least in RttFA) the deck doiesn't generate enough excess damage for this to supplant other resource cards. — LivefromBenefitSt · 193 10/30/20