When you draw a Hazard treachery, deal 1 damage and 1 horror to Protective Gear: Cancel that card's revelation effect.

After what you've seen, you intend to sleep in it.
Tony Foti
Edge of the Earth Investigator Expansion #95. 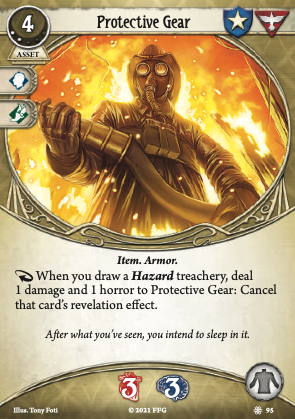 This varies from campaign to campaign how good it is, but there are some general rules of thumb to keep in mind regardless:

1: A lot of hazards target multiple players, so even though your less likely to be the one to draw the hazard, each cancel you make 'counts more' in higher player count games. This is a mixed bag to be sure, but one player spending 1 health and 1 sanity soak to cancel something that may say.... cost 4 actions across the team once a game still is better than canceling that for 3 health and 3 sanity to save 3 actions.

2: A lot of hazards target speed, and a few target will. Quite a few also just don't allow you resist them at all.

3: A lot of hazards target your stuff, do lots of damage, or steal your actions or slow you down in some major way. There are a few not so bad hazards, but for the most part they pretty spoooooky.

This combined with the relatively good soak to cost ratio if you just use it as soak, the fact its a rare horror soak in body, and body isn't a common slot work for it: The ability to say 'nah' to the encounter deck is huge. The big things that stick out are its an XP card and guardians tend to be XP hungry (Though survivors tend to have plenty to spare) and both guardians and survivors are the most likely to have good uses for their body slots due to having the flamethrower for guardian, and leather coat for survivor.

Guardian wise, Leo Anderson might want this. As someone with lots of allies they don't exactly need soak, but they often really struggle with hazards due to their terrible speed resulting in them having to dump resources out of hand or let their friends die to handle some jungle fauna. Maybe that is why his entire previous expedition died? Due to the fact Leo is already asset heavy this may be tough to fit in, and while Leo has great econ options he also tends to run expensive, so its a tossup. Probably for sure in Lost Age though.

For Survivors, Calvin always could use more soak tools, and this lets him double up a slot for that, maybe freeing up the trinket space from sanity soak to something else. And eating a hazard early could really mess him up. Again, if its already a hazard heavy campaign he may want it.

Overall, it feels like the soak is nice, and definitely a big reason you take this, but you never take it JUST for the soak. The soak is the value add for when your not getting hazards. Your character probably should care about both (if it just canceled 3 hazards a game it would be terrible after all), but if the campaign really lacks hazards (which is rare but happens) you shouldn't take this.

There is one more thing worth mentioning though: This is a 2 XP card, meaning its accessible cross class. This opens up a lot for certain characters: Skids, Diana, Joe, Agnes, Mhin, and Preston can all take this, and it actually is somewhat interesting on some of them.

Skids is very poor, sure, but we also know his sanity is super fragile, and having access to soak for that can help him out a lot. The tempo hit from a lot of hazards is also very spooky.

Diana can use the last activation of this as a cancel, and unless she uses Robes of Endless Night or runs Bandoleer this serves as her main use of a body slot and makes an already tough character able to say no even more 'no-y.'

Agnes likewise really can take lots of horror as her base version, and wants things to damage as her parallel (though her parallel is likely going to want to use a leather coat to do this, she can use the sanity at least to tank her weakness).

Finally, for Preston, bypassing tests is a big part of his play, and this lets you do that quite often. Preston is rich as well and has the least trouble playing this of any character with access to it, meaning he might legitimately be the only person who wears a fire suit around say... The Silver Twilight Lodge manor. With awful stats mythos phase can be rough on him when tests come about unless he expends resources in some way to bypass them, which means that being able to say no to a test with a degree of failure downside really can save his bacon. Finally, and most critically, there is an extreme synergy with Darkhorse Preston due to him being able to take a Fireaxe with it, which definitely means someone is going to name a deck "Firefighter Preston" and toss Flare and Fire Extinguisher in there just to complete the set.

dezzmont · 128
If we're talking about which investigators might want this, Tommy seems like a much more obvious choice than Leo out of Guardian. It's an asset that damages itself to do something good and has more total health+sanity than its resource cost, so it recycles really nicely. — Thatwasademo · 44 10/27/21
It certainly isn't bad in Tommy! It competes with the coat there but both net 2 if you use em right. Coat is easier to use and doesn't overlap with pawterson, while the gear protects his allies. Still, a lot of hazards make Leo's 1 speed REAL rough and often specifically will hurt his allies too. I would in a campaign I knew hazards were about take this on Leo more often than Tommy. — dezzmont · 128 10/27/21
Firefighter Preston, yesssss... — anaphysik · 76 10/27/21
3

This card card can cancel Crypt Chill and Corrosion so if you're an asset heavy guardian or survivor, you know how easily these cards ruin your day. Also works for snake bite and grasping hands which are nasty little agility tests that can be pretty cruel.

Here's another item that Lonnie Ritter can fix (along with the two Precious Mementos and Heavy Furs in this set), and in the two other factions likely to want the horror healing of Lonnie. But to get more uses of Protective Gear's ability, you'll need to heal the horror, too. That's a tougher task, since most card effects heal horror only from investigator cards or Ally cards. The exceptions are Ancient Stone, for which you'll need Seeker access, and Call for Backup, but for that one you'll need a Mystic card, too to do the horror healing. All of this points to just one investigator, Carolyn Fern, who can additionally run The Star • XVII to beef up this and Lonnie and just never die.

For other investigators looking to get extra uses out of this card, forget Lonnie, Call for Backup on its own will do the trick. This card already gives you the damage healing from being a Survivor card, you just need a Mystic card in play, too. Lily Chen and Diana Stanley don't need any more help since their investigator card counts. There's a good chance Sister Mary and Patrice Hathaway already have a Mystic asset out. For all other Guardians and Survivors, you'll need to run another multiclass card, which isn't a bad idea if you are playing Call for Backup anyways.

A more straightforward combo is just to use this thing up three times and pull it out of the discard. Anyone with Resourceful can do this, or anyone happy to take Scavenging like Minh Thi Phan or Agnes Baker.

Finally, the use of Protective Gear's ability depends on the campaign. A few campaigns so far have little to no specific Hazards. Canceling a Hazard usually lets you bypass an Agility test (sometimes a Willpower or Strength), but other times a nasty revelation effect.

This goes from required to useless depending on your campaign. In particular, it shines in return to Circle Undone and EOTE.

Outside of these scenarios it loses a bit of value. It's still a fairly powerful Tommy card for instance, as long as you bait his weakness on something else (Mr Pawterson, for example) and Tommy has tools to let you do just that (spirit of humanity).

Overall it's a good support card when used appropriately, but its definitely not an auto include.