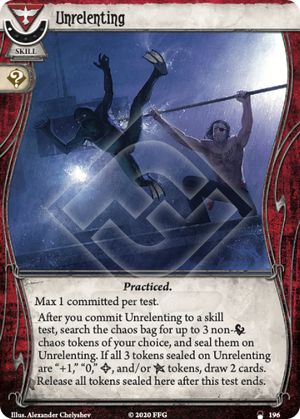 This might be an interesting skill for (traditional, not parallel) Agnes Baker, if she uses Jacqueline's set of Spell assets. On expert you would need at least one in the bag to trigger the "draw 2 cards", but otherwise you would just have to seal the tokens, you don't want to pull on these tests anyway.

I don't really like Jackie's "replacement spells" that much, Azure Flame is fine (and for Diana with twice Arcane Research clearly the better card than Shrivelling), but Clairvoyance costs one XP more (though 1 resource less) in the upgrade path than Rite of Seeking and free movement from Mists of R'lyeh is more often useful than extra damage from Ineffable Truth, if you go for evading. It also shares the extra XP cost. But card draw is one of the rare things, aren't really good with, mostly being limited to Arcane Initiate and Guts. For 1 XP that looks like a bargain for Agnes to gain two cards and protect from undesired spillover effects. And that's probably enough to give Clairvoyance and Ineffable Truth the edge, they need for me.

"Ok, I'm going investigate this 2 shroud location. I'm at 2 int, but don't worry guys, I'm actually looking to purposely fail so that I can play my "Look what I found!" for twice as many clues as I would get from just investigating normally. And you know what? I'll commit a Take Heart for good measure. After all, more than 80% of the tokens in the bag have negative modifiers; we've drawn like, 3 -4's in the last few tests. I'm basically guara...

Has this situation ever happened to you? Well boy do I have the product for you!

Lucaxiom · 2733
O yea, that's even more reason to love this. — Zerogrim · 190 2/22/21
It does give you a plus one to the test, so 2 to 2 is still one up with it. Weird situation where a card would be better in some scenarios without a wild icon. — SSW · 93 2/22/21
Shout out to Crystalline Elder Sign for sealing the dreaded +1 — StyxTBeuford · 12490 2/22/21
I've also seen it happen in a party with Stella and Mary that Stella is doing like a 4 Vs 7 test she wants to fail, and draws like bless bless -1 — NarkasisBroon · 1 2/22/21
I think there could be an interesting failure-heavy deck that takes advantage of this to seal good tokens, and SoH to add more bad tokens (Favor of the Moon could help make sure that you draw them). Could be interesting with OYO, as SoH can let you heal up damage and horror that you can no longer soak on allies. — Zinjanthropus · 164 3/6/21
You could use it to seal the special tokens that have terrible effects if you fail when deliberately failing. — suika · 7725 3/9/21
3

Cool card, what wins me over is the straigth flexibility.

So, yeah, that's actually a lot of viable strategic options, something skill cards dont typically have in such volume. usually it's just "Hurr, Durr, hit hard.". I'm real happy to see my favourite card type get some nuanced love!

On the note of the card draw bit, which will pull in the interest of many of you, make sure you can actually beat the test, trading a card and a failed action for 2 cards is rather weak, so either make sure youre failing upwards or beating the action.

Finally: The seal mechanic happens before a test, the release mechanic has been set into motion by committing the card, this means that Silas Marsh can commit the card, seal some tokens, draw a token, return the card, resolve the test, return the sealed tokens. If Silas didnt make you all hot and giggly before this card was released, he should now.

Finally, gets 2-drawing skill card. When starter pack released, unlike other factions, has Unexpected Courage and cannot gain 2-drawing skill card. Unrelenting has that role in . You can draw cards even if you fails, and you can recycle this card by Resourceful, Try and Try Again, Silas Marsh, Butterfly Effect. Also, for urgent test, you could seal terrible tokens such as -5, , ; but, be careful. it's more likely to draw .

This card seems good, but has one big problem. Whenever you commit this, you have to find three tokens in token bag and seal on this. That is really really annoying work. But, don't worry. Here is a trick. If you select all tokens of one type, you don't need to find and you can just ignore selected type of tokens. (+1, 0, 0 for standard NotZ)