Fast. Play when a chaos token with a symbol is revealed during a skill test at your location (before resolving its effects).

You or the performing investigator may either commit a card to this skill test, or return a card they committed to this test to their hand. 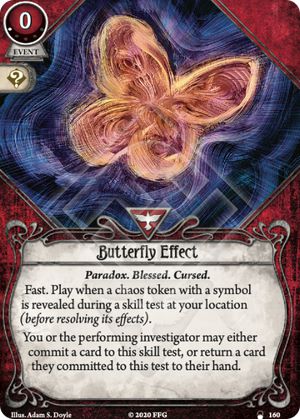 It's a simple card. You really can't go wrong using this to get extra uses out of Unrelenting or Seal of the Elder Sign, as long as your deck is relatively skill heavy. Every other effect it has is pure gravy.

Using it as a retroactive commit tool makes it a variant of Lucky: 0 cost, but requires you to spend a card. The 0 cost is also excellent for Dark Horse decks. If you retroactively commit a cantrip skill (Perception, Overpower et. al), the card cost will be offset. If you're only short by +1, retroactively committing Unrelenting allows you to draw 2 card without the sealed tokens affecting the test result. Using it to commit events or assets is meh, but sometimes you just need to pass that test. If you drew though, not much will help save for a retroactive Take Heart or Seal of the Elder Sign.

The Grisly Totem/Try and Try Again effect if you fail and is always useful, except that this can be used on allies as well. Winifred will love you for saving that All In from being wasted on an . And you can recover the card even if you don't fail the test. Take back a wasted Take Heart or Last Chance after you draw your or a , or an Unrelenting for 2 more cards, or a Signum Crucis for even more blessings. If Agnes takes back that Seal of the Elder Sign: you'll no longer be getting an effect on this test, but no chaos token is revealed anyway.

It's not an auto-include by any means. Although Silas, Pete and Minh run skill heavy, their deck slots tend to be highly contested, and unless they're doing bless tech it's likely to be less effective than a Try and Try Again. The idea use case is to support a skill heavy ally while also being skill heavy yourself.

suika · 7725
How does this work as 2 extra copies of Unrelenting? I'm curious. — toastsushi · 62 3/7/21
Committing unrelenting, sealing 0 0 +1, and you have a very good chance of seeing a symbol and being able to pull unrelenting back to commit it again. More so with a few blesses or curses in the bag or later in the campaign with more special tokens. — suika · 7725 3/8/21
For clarity's sake, I mean that you can't really go wrong using it to pull back unrelenting every time you're able to, not that it's literally 2 copies of unrelenting. — suika · 7725 3/8/21
Amended review to be clearer on that. Also are you're the monogatari campaign guy? I just want to say that I'm a huge fan. — suika · 7725 3/8/21
Yes, I am! :D — toastsushi · 62 3/8/21
You could actually guarantee those cards to return to your hand by investing in Favor of the Sun and Ancient Covenant, and the assumption is that you're already playing a bless-heavy deck. Commit Unrelenting, trigger Favor and Ancient, then play Butterfly Effect to return Unrelenting to your hand. — toastsushi · 62 3/8/21
Not sure you can get extra uses from Seal of the Elder Sign due to the "when this test ends" clause. I've read that other "after this test end" cards (e.g. [Daring](/card/06111) still trigger their ability after being returned to hand, so would be the same for SotES? — Advachiel · 49 6/7/21
1

I think there are more combo in world, and I'll add if I find more :)

elkeinkrad · 167
What our group has found Butterfly Effect invaluable for is simply letting us account for nasty symbol token effects. Quite often we’re willing to fish on a test without guaranteed success, or even when we’re aiming to fail (i.e. for “Look What I Found!”), But we are less concerned about the tempo loss of failing than the nasty ‘of you fail’ effect on some of the tokens. Butterfly Effect let’s us take those tests knowing we can avoid those nasty surprises. Sometimes it’s also just a pseudo lucky. Nothing fancy, but it puts in work for 1xp. — Death by Chocolate · 815 3/17/21