Revelation - Draw the top card of your deck. If it is not a weakness, remove that card from the game. Then, search your deck, discard pile, hand, and all play areas for each other copy of that card you own, and remove them from the game, as well. 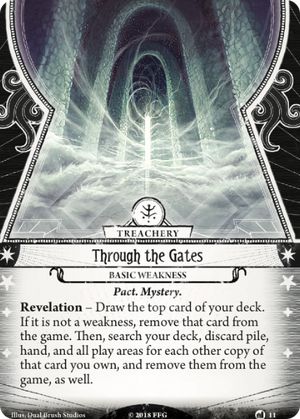 I guess in a Mandy Thompson's deck, that weakness becomes a very powerful card. If we draw Through the Gates (with Mr. "Rook", for example), we'll trigger a search in ALL THE DECK, but that "search" will be canceled if we have Shocking Discovery in the deck. So... we'll have removed two weaknesses at the price of one card from the deck and one card from the encounter deck. I really think it's worth it.

On paper, this weakness doesn't seem that bad. It's easy to picture scenarios where you draw something like Emergency Cache, some skill card, or end up having to toss an asset in play that's out of ammo or charges. Sure, it's too bad if you end up losing that second copy of .45 Automatic or whatever, but for all intents and purposes, that card might have been on the bottom of your deck and you weren't going to draw it anyway. And heck, maybe the second copy is already in your discard pile - no biggie, right? Or maybe you don't even have a second copy of the drawn card! Then all you've lost is a single card draw - far from the end of the world.

And yeah, you will encounter those types of low impact situations with this card from time to time - which can make it feel pretty mild.

However, when this card hurts, it really hurts. It's particularly brutal if it causes you to lose your only weapon in play, or some other asset you are heavily relying on. If you are playing solo, then - depending on your investigator - you can find yourself suddenly defenseless with essentially no recourse other than to resign. There's the potential for some real feel-bad moments when you end up losing a fully powered Hawk-Eye Folding Camera, or an Investments that you've been juicing since the start of the scenario. And there's nothing quite like having your big gun disintegrated right before a boss fight to really elicit some choice swear words.

Having played with this card a few times now, I have to give it a lot more respect than I did initially. It's a lot of fun (in the way that only cruel cards can be) and is probably one of my favorite weaknesses, just because you never really know how much of a disaster it's going to be until you see what's sitting underneath it.

bricklebrite · 87
Maybe consider running singletons of your super weapons if this is your basic weakness. There are enough high power lvl 4-5 guardian weapons that you can easily diversify if you know this is in your deck. Other staple cards are harder to justify playing around this card, but it is doable with the current card pool this deep. — Death by Chocolate · 421 2/13/20
i would think it's especially bad if you lose a one-of-a-kind card that's a core part of your strategy. something like Peter Sylvestre or Lola Santiago — Zinjanthropus · 93 6/17/20
Yes, it is very swingy. A friend of mine (first time player) was playing a 19 XP deck, draw this one as one of his weaknesses, and had both 5 XP Shrivelling removed by it. So he was basically playing a 9 XP deck with one extra RBW. This was quite harsh. — Susumu · 1 8/27/20
Forgot to mention: this was a stand-alone, Carnevale to be precise. — Susumu · 1 8/27/20