Revelation - Shuffle Shocking Discovery back into your deck. (If you cannot, discard it and draw the top card of the encounter deck, instead.)

Forced - When you search your deck and this card is among the searched cards: Discard it. Cancel the search and all of its effects. Shuffle the searched deck. Draw the top card of the encounter deck. 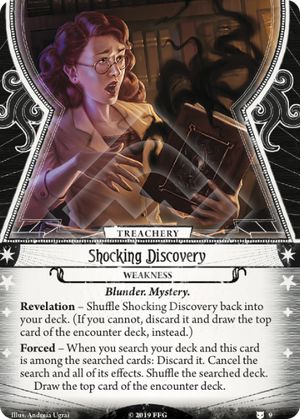 Mandy Thompson is quite a complex investigator to take, not only her deckbuilding options but also her weakness seems to have more to it than meets the eye. I am not completely sure, if I am doing it right, but as far as I do understand the rules as written ("When a player is instructed to search for a card, that player is permitted to look at all of the cards in the searched area without revealing those cards to the other players.") the target of the search for certain cards is the entire deck. This is true for the upgrade No Stone Unturned for example. So if you use such a card, than you will always find Shocking Discovery and by that set it of in a "controlled environment" so to say and don't have to worry about it any longer.

Having said that, as long as you do not have found Shocking Discovery yet, than a card searching the entire deck is pretty valuable for Mandy to have. So not only the expensive upgraded No Stone Unturned which you might probably not want to waste on this, but also cards like the 0xp Research Librarian all of a sudden look completely different to me. Even some encounter cards might help, like SPOILER or SPOILER from Path to Carcosa. The latter will also surprisingly be completely canceled as far as I do understand it.

thakaris · 47
That’s a great find on the SPOILER encounter cards. RAW I’m certain it cancels if you draw the card, but the later would still resolve if a different investigator draws it and is the one searching your deck. The basic weakness, Through the Gates, also. :) — Death by Chocolate · 56 12/10/19
On the first SPOILER the horror will also be canceled i guess? — Django · 2740 12/11/19
Probably not. It’s does ‘horror and a search’, so I don’t think the horror falls under the ‘search and it’s effects.’ — Death by Chocolate · 56 12/11/19
@Django: As far as I do understand it, the first SPOILER card will work like this: If you fail the test, you take 2 horror, also you search your entire deck. The latter will be canceled and you have to draw another encounter card. You still take the 2 horror but from now on you can use Rook as much as you want, you may uses upgraded No Stone Unturned and basically become the incredible card search machine that Mandy becomes ones here weakness is out of the way - so enjoy! — thakaris · 47 12/14/19
@Death by Chocolate: Regarding the second SPOILER from Path to Carcosa - you are right about that one in my opinion. If another investigator draws that card and searches you deck it does not trigger, since Shocking Discovery says "Forced - When you search your deck". Since it is essentially not "your deck" you are searching when a player besides Mandy herself draws that second SPOILER encounter card it will not be canceled. It is really a pity that there is not a card that allows you to temporarily take ownership of any given card since I really want to put "Shocking Discovery" under Diana :-) — thakaris · 47 12/14/19
I don’t think such a card would exist since SD is a treachery, so no player has ownership of it while it is resolving. — Death by Chocolate · 56 12/16/19
Even if you could switch owner, Signature Cards have been errated that you cannot give them to other investigators (unless they'll publish some shapeshifter). — Django · 2740 12/17/19
What happens If you are told to search your deck for a card during the setup? — Taskonidis · 1 12/18/19
Well, that is a very good point. There are very few situations though, I can think of that makes Mandy search here complete Deck during setup. Just one specific situation during Carcosa come into my mind. I don't think, you can draw from the encounter deck or discard during setup, so I would rule per Grim Rule and decide that Mandies weakness would not trigger here. Maybe to file a rule question with FFG would be of help here. — thakaris · 47 12/22/19
It happens at least once during Dunwich and The Forgotten Age also. — Yenreb · 3 1/6/20
The very first scenario of Dream Eaters does it — PanicMoon · 2 7/25/20