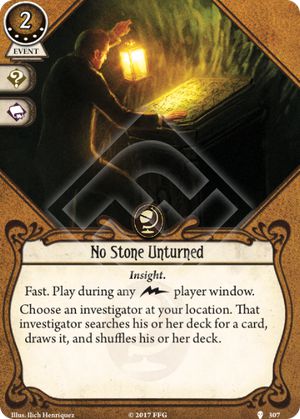 A powerful card with a supremely expensive cost. Most people will say "Why bother?" and if you are designing your deck in a vaccuum, it probably will be over looked for some other great toys.

But in multiplayer, you can be the supreme support character with a copy or two of this. If you can stomach the xp cost, this card will make your Guardian and Mystics more consistent, allow your Rogues to pull that game breaking combo or just save someone's skin at just the right moment.

Really, this card feels maybe 1 xp too much, but it also is pretty amazing. Fast, during anyone's turn find the solution to a problem for just two resources.

It is hard to argue with it. I think if you are leaning more into a support role, this is your endgame. This card will make your team love you and will allow you to pull some of the best tricks the game can offer.

So yeah, support/10. I think its a home run in multiplayer.

Myriad · 1134
Good for finding hidden watches. — SGPrometheus · 636 3/27/18
Notable: With Crafty to pay for Insight events it can be a life saver even if you have no or not enough resources. — Miroque · 16 12/18/21
I'm a bit surprised no one's mentioned Mandy yet. She gives two cards, doubling this cards power. Great for your friends! And, great for Mandy too, if you've already drawn her signature weakness (which you can pull with Research Librarian). — khoshekh · 5 3/27/22
170

This card can target any card in a players deck, including weaknesses. This aspects usefulness depends on the weakness in question:

Django · 4140
This card is insanely strong. 5xp is worth every penny; if your board state isn't vastly improved after playing this card, especially in multiplayer, reconsider your deck. — SGPrometheus · 636 3/27/18
I agree, this is in the top tier of Seeker XP cards. But it's probably best in multiplayer because other classes are more dependent on key assets. Fetching Shrivelling V, Lightning Gun, etc, is probably the commonest excellent use of this card. It has the flexibility to do anything, of course. — CaiusDrewart · 2687 3/28/18
Yes, i'm not saying it's a bad card, just the "aspect of targeting weaknesses" usefulness depends on the weakness in question. For example, it's pointless to target stuff that is shuffled back into your deck, like rex curse or "the thing that follows". — Django · 4140 3/28/18
70

At the time of writing this had only been out a few days - and I've used it in 3 games...

This card is quietly awesome - if you, or a fellow investigator, have another card that you really need.

It's not flashy. It isn't fancy. There's no cool combos I can see. Letting someone draw any card from a deck doesn't seem that spectacular. But...

No fuss, no worries about weaknesses or where it is in the deck, just for 2 resources take any card. It doesn't even cost you an action.

Okay, that is spectacular.

The down side is that 5 XP is a lot of XP. It's up against flashier cards, like the The Red-Gloved Man, Deciphered Reality, Strange Solution. And it's only as good as the card you need to grab, so it probably isn't a good pick for early in a campaign. However, later on, when you've a few high-value cards in the deck - this one is a solid choice.

(That said, for Minh Thi Phan, Analytical Mind is so central to her that I could imagine taking this early for her)

Solo, it loses too much benefit to be worth it's XP, and Seekers have plenty of access to filtered draw through Old Book of Lore, Eureka!, and No Stone Unturned anyway.

With the advent of Astonishing Revelation, I have completely come around on this card. It has evolved from 'nice card to play if you can draw it', into a genuine wild-card that you want to try to mulligan into. If your deck is dependent on a particular card for a combo, you now have an additional copy of that (or those) cards. AR may end up getting drawn, sure, but if you get this one first, you are taking 0 actions and paying 0 resources to take any card out of your deck. Talk about consistency! If you are particularly insane about min-maxing, you can include 2 AR's, and 2 NSU, and use one to pull out the other, and then use the second NSU to pull out the card you want. I think 2 is the sweet spot for AR, unless maybe your deck size is large, and you can always add Practice Makes Perfect to help weed them out.

If you're running a seeker with more experience than you know what to do with, I recommend giving this card a try. Maybe even with a versatile to add in the AR's. You might be surprised at how much fun it is....or your might draw all your researches on your mulligan and come back to complain!

endoviking · 19
I recommend still going for 3 Astounding Rev. The more you have, the more likely you thin your deck and gain resources on search, and a deep Search like NSU 5 to grab the second and third copies works beautifully. Use PMP and the like to get the first copy. — StyxTBeuford · 12699 3/29/21
5xp aint cheap tho. — MrGoldbee · 1233 3/29/21
Nope, but this card is definitely worth it, at least for Joe and his Hunch deck. Mandy as well for retrieving any 2 cards you want. I typically use it on others, but it can be worthwhile to use it yourself for deck searches. — StyxTBeuford · 12699 3/29/21
Be careful using this with Mandy, if you haven't already discarded Shocking Discovery. Otherwise, your 5XP card will fail and you'll be drawing an encounter card as well. — thereelaristotle · 14 4/8/21