Revelation - Put Angered Spirits into play in your threat area.

Exhaust a Spell asset: Move 1 charge from that asset to Angered Spirits.

Forced - When the game ends, if Angered Spirits has fewer than 4 charges on it: You suffer 1 physical trauma.

Odera Igbokwe
The Path to Carcosa #15. 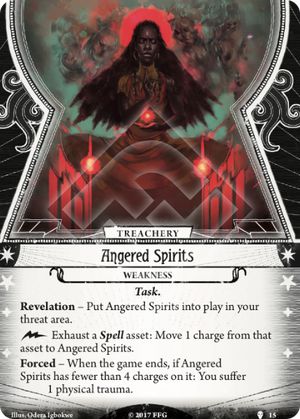 Just a note as this is mentioned on the page for Roland's Cover Up weakness, but is not noted here. The same principle applies:

If Akachi is eliminated (by being defeated or taking a resign action) while Angered Spirits is in play, Angered Spirits's Forced effect triggers, as per the FAQ [V1.0, section 'Rulebook errata', topic "Elimination"]: For the purpose of resolving weakness cards, the game has ended for the eliminated investigator. Trigger any “when the game ends” abilities on each weakness the eliminated investigator owns that is in play. Then, remove those weaknesses from the game.”

This is just as tricky to manage for Akachi as it is for Roland, as she already has a lower health value. In campaigns that result in many physical trauma to investigators (The Forgotten Age, for instance), this can put Akachi at a disadvantage to other mystics if not managed carefully.