: Evade. You get +1 for this evasion attempt. If you succeed and you committed 1 or more skills to this skill test, you may automatically evade another enemy engaged with you. When this skill test ends, you may return Silas's Net to your hand to return all of your committed skill cards to your hand instead of discarding them. 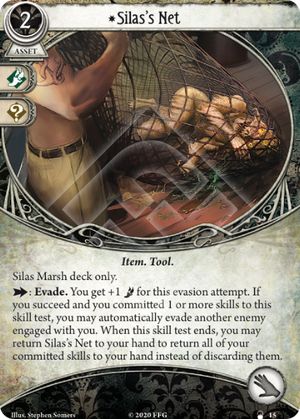 Silas’s net is tricky. You’re not likely to be engaged to more than one enemy unless you’re doing that on purpose or facing a boss. But the secondary ability, to recover your skills after successful test, is extremely useful. Nimble, manual dexterity(2), quick thinking... Evades can now give you tons and tons of supplemental actions, far and above what it would take to play the net again.

Playing resourceful multiple times a game means not having to invest in cards that get it back, like scrounge for supplies or true survivor. But the net, like the harpoon, needs to be built around. If you don’t have many agility or wild icons in your deck, then the net is meh.

UPDATE: Taking another look at Silas’s net, it can evade massive enemies, especially ones that have alert. That makes fighting bosses as a team much much easier, as the catch of the day becomes “elder gods“. It also lets you tank enemies in larger teams, and the Innsmouth conspiracy definitely doles out more than one enemy per player in many circumstances. Plus, you can take the net back into your hand with quick thinking, and put down your chainsaw.

The Evade mirror to Sea Change Harpoon, this has all the advantages and disadvantages of its mate. Given that evading multiple enemies at once generally comes up less often than wanting +1 damage, this may get less play than the harpoon, especially since survivor has a bunch of ways to statically boost for single-enemy Evade attempts. Using the second part of the ability often racks up the resource and action count pretty fast, so it's going to be a sometimes treat, unless you really want those particular cards more than resources. Like pretty much everything Silas does The Tower • XVI will shut it right down, and Silas seems to have a magnetic attraction to that damnable card.

With two pretty good signature assets and a hard but manageable signature weakness, it's up to personal preference whether you want to go with the "box," "book," or both signature sets. Silas has one of the better sets of options to choose from.