After you successfully investigate by 2 or more, exhaust Scavenging: Choose an Item card in your discard pile and either add it to your hand or play it (paying its cost).

Derk Venneman
Weaver of the Cosmos #332. 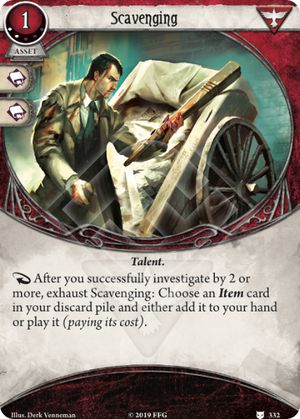 Minh Thi Phan can now become the Keymaster from the Matrix with Old Keyring and Scavenging (2). As long as you can afford to spend 1 resource every 2 successful investigates to pay for the keys, you are effectively permanently removing 2 shroud from every location.

So... this card... this card is insane. there is no other way to say how unbelievably insane this effect is, letting you play an item from your discard pile is both a 100% reliable tutored draw and a play action rolled into it, in the class that has 0/1 cost items galore its just makes you immortal with Cherished Keepsake and Leather Coat, as the other reviews point out you can use it with investigate cards themselves to boost your investigate which helps you get more cards which.... [looping intensifies]

But today I come to ring its bell because of one avenue of power that this humble card totally wrecks open, Story Cards.

Story cards range from good to under costed to down right broken, and sure not all of them are items, but in the cases they are and they have a low cost you can just cram all of them into your deck and use their often ridiculous abilities right from your discard pile then if they have a slot just overwrite them and then play them again...and again...and again, and never spend an action (or in some cases a resource) to do so.

Sure would be nice if we had a campaign that had some decent story item's or two in it huh? Fake wink

I am legitimately having to struggle not just slamming two copies of both Scavenging and then Scavenging into every deck ever now, I'd honestly not be sad paying double for this in XP.

I'm not sure this card will ever get any stronger than now though given we have cards that give it infinite fuel Short Supply Forced Learning cards that give you unlimited money with it Schoffner's Catalogue and basically any effect you could want The Council's Coffer.

O...and its still slotless so you get two play actions every turn if you do so something as crazy as investigate slightly higher than you needed to be, this gets even the slowest set up investigator fully installed while keeping them focused on their primary task.

Zerogrim · 248
I find the biggest limit on Scavenging is the lack of high intellect survivors, who would regularly make the plus two. — LegendRJS · 2 2/6/22
I agree. I think, it's best in off class survivors like Minh (or Agnes, who can trigger it on a willpower investigation spell). I wrote a review @ Pantalone from "Carnevale of Horrors", and this was a very strong combo for Minh. — Susumu · 217 2/6/22
On second thought, "Medico Della Peste" would be as great on Agnes, repeatingly healing Horror (or Damage for II version) is fuel for her ability. Minh still gets the edge on this combo, as she has a much easier tools to assemble the pieces for it. — Susumu · 217 2/6/22
Most survivors do have low int but there are so many ways to boost your int in survivor, also bless builds will easily pass by 2 very often. but yea I do agree it gets easier to make it nuts outside survivors. — Zerogrim · 248 2/7/22
It’s very good versatile target for any seeker with some items, especially fast like ice pick — Django · 4192 2/7/22
No, it's not. You can only versatile into the level 0 version. But this one is level 2, we are talking about. — Susumu · 217 2/7/22