Weaver of the Cosmos

: -X. X is the highest amount of doom on a location in play.

: Reveal another token. If you fail, and there is an Ancient One enemy at your location, it attacks you.

: 0. The black cat tears at the web with its claws. If you succeed by 2 or more, remove 1 doom from your location.

: -3. If this skill test fails during an attack against a Spider enemy, place 1 doom on that enemy's location. 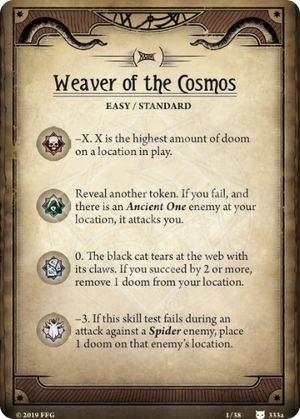 Weaver of the Cosmos - Back

: -X. X is the amount of doom on locations in play.

: Reveal another token. If you fail, and there is an Ancient One enemy at your location, it attacks you.

: -1. The black cat tears at the web with its claws. If you succeed by 2 or more, remove 1 doom from your location.

: -4. If this skill test fails during an attack against a Spider enemy, place 1 doom on that enemy's location. 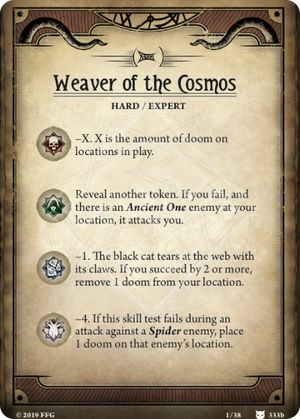 I just ran this scenario with a Mandy/Tony combo, and it ended up being a joke. I feel like I must have done something wrong, but this scenario seems to lack the teeth one usually expects from the final scenario in a campaign.

The first part of the scenario is a fairly straightforward "grab the clues, get to the end" - nothing worth writing about except that interestingly enough, you are not punished for leaving doom on locations. I would have expected it to maybe move to the agenda.

I really like the main scenario gimmick that pops up in the second agenda. I think it's really well designed, flavorful, and interesting. However, those legs are pretty darn weak when the act lets you spend 1 clue for half of their life (with two people). Add to that the fact that they can't AOO, and their fight averages around 3 or so, and they're more of a meat cushion than a challenge. Mandy and Tony were able to split the legs evenly, with Mandy gobbling up clues like a high level seeker does and Tony using his many actions and guns to fill the legs with lead. Side note - "The Spinner in Darkness" is totally meaningless here. Maybe leftover copies should transfer to Atlach-Natcha in the final act?

Atlach-Natcha itself in the final act is where things are supposed to get real, except that our investigators had a dearth of clues, so two clues plus a pistol shot is all it took to down an Ancient One. Definitely a hollow victory.

Maybe we just got really lucky with the Atlach-Natcha spins and the locations that were arranged in Act 2? Either way, lots of potential here, but definitely not what I would expect from a final scenario.

TheMathDoc · 8
I had a similar experience on my blind run with solo Tony. Had some challenges getting there but at the boss battle, just blew it away... — housh · 141 10/24/21
The clue approach provokes AOOs in the final stage so spending two would be painful without an evade by the clue spender, but yeah it's definitely the easiest final scenario depending on your luck. Also, if you're not immediately ready to fight the final form, you could be chasing it around getting 4 doom per round. — Defel · 4 10/25/21
Yeah, we played that scenario twice. And even though, our team was comparable weak on the blind run, because of unfavourable outcomes in previouse scenarios, we won it quite easily. It never felt threatening even then. Not to mention the second run, where we aced it, after the whole campaign went much better. — Susumu · 271 10/26/21