"You think wearing that makes you look like the cat's meow?"
"Nah, I already know I'm the cat's meow. This just lets everyone else know."
Robert Laskey
Winifred Habbamock #10. 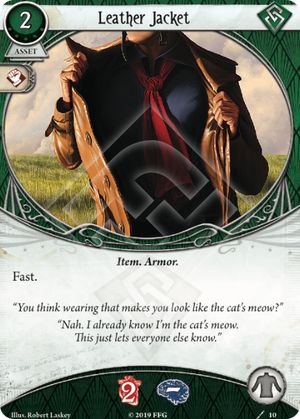 A bit of an odd card for Rogues. Fast is really nice, but most Rogues don’t struggle with health much due to having high health values and high agility. You might consider this for Sef if it weren’t for Robes of Endless Night, which gives her a really nice discount on spells. For off class Rogues, this doesn’t do much for anyone except Dexter. Leo is built to be tanky with lots of allies, and Wendy can take Leather Coat if she really needs the soak. Dex can at least use this to effectively make something else fast with his ability, and the soak is very nice for him. He might want Robes instead, or he might want both.

You could also play this alongside Lonnie for a decent horror and damage healing engine, though 6 resources and 2 cards for that seems like too much.

StyxTBeuford · 12722
Yeah, I'm not sure where this card fits, other than to fill the niche of giving every class their own body asset (except seekers...). The Lonnie combo is good, but if I'm a rogue I think I'd rather combo her with Trench Coat, which gives me a bonus I'd gladly pay one more resource and an action for. — MiskatonicFrosh · 139 9/2/20
Maybe its meant to be part of Wini's solution to Beyond the Veil. If you had this, Joey "the Rat" Vigil, and Delilah O'Rourke, you could soak 8 out of the 10 damage. — Zinjanthropus · 209 9/4/20
I bought this preconstituted deck in Italian and only one of the two leather jackets is written fast — Tony Morgan · 73 10/12/20
Regarding >Wendy can take Leather Coat<: sure, but 2 resources for an action seem like a fair trade. "Skids" has that as his special ability. Also it can stay in hand in case you don't need it, because you can install it safely engaged. Sue, survivors are normally not as rich as rogues, but I would give the Jacket a slight edge over the coat, if you can take both. — Susumu · 221 12/9/20
Unless of course, you go "Dark Horse", in which case, you don't want to keep 2 resources availble for emergency. — Susumu · 221 12/9/20
Nah I just straight up disagree with that assessment. 2 resources will almost always be more valuable than an action, and that’s a pretty big reason why OG Skids is not nearly as well liked as his parallel version. Leather Coat being 0 is particularly huge for recursion savings, as Survivors have the ability to replay things from their discard much more easily than other classes. Recursion at 0 resources is significantly stronger than recursion at 2 resources per opportunity. Saving an action is nice, and I wont discount the AoO dodging, but overall I find this considerably harder to include than Leather Coat. — StyxTBeuford · 12722 1/13/21