During your turn, exhaust Garrote Wire: Fight. You get +2 for this attack. Use only on an enemy with exactly 1 remaining health.

Stephen Somers
Where the Gods Dwell #280. 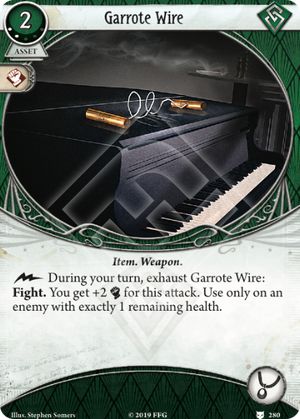 Since nobody has said it yet. It's good.

Delilah O'Rourke is a very obvious combo. Between a successful evade, spending money on Delilah and the Garrote Wire you can do 3 damage every round, which will see you through most enemies in several campaigns, no other weapons needed.

Oh I get it! It takes up an accessory slot because it goes around the neck. I see what you did there FFG. Need 200 characters I'll just talk about my day until there. Started off sleepy but got coffee

Great item overall, but notably lacks the ability to finish off a foe you've spent your turn weakening. After looking through the windows for fast actions there's one before each of your actions during your turn, assuming I'm reading it right, but there isn't a window AFTER your last action.

Since the Garrote Wire can only be used during your turn, if you spend your entire turn chasing down a monster and manage to bring it down to one life, you can awkwardly have your turn end with a piano wire all ready to use and a nightgaunt all ready to be choked out without the opportunity to ever use it.

It still gets plenty of mileage for sure, but due to timing it has felt pretty awkward to use sometimes.

Vultureneck · 72
When you use your last action, the game still returns to the player window immediately preceding 2.2.1. Your turn only ends when you encounter 2.2.1 and *don't* take an action, or when a card effect says it does. — Thatwasademo · 44 1/21/21
In other words, there absolutely is a player window between your last action and the end of the turn, and "Framework Event Details" in Appendix II is pretty clear about this. — Thatwasademo · 44 1/21/21
"After an investigator takes an action, return to the previous player window. An investigator may end his or her turn early if there are no other actions he or she wishes to perform. If the investigator does not or cannot take an action, proceed to 2.2.2." — Thatwasademo · 44 1/21/21
What demo said. You can absolutely use this after your last action. — StyxTBeuford · 12744 1/21/21
Heh heh, I've used this in two campaigns and, I think, never noticed the "during your turn" restriction. Oops - I'm pretty sure I killed off many enemies in the enemy phase. — acotgreave · 525 1/21/21
Well am I glad to have that cleared up, the last two campaigns I've played we had it ruled where you couldn't play this or "Knowledge is Power" as your last action, it felt clunky and unnatural but as far as we could tell was the correct ruling. Thanks for clearing this up. — Vultureneck · 72 1/22/21
@Vultureneck you should edit the review not to mislead people with an incorrect rules interpretation — jd9000 · 69 4/14/21
49

As of the end of the Dream Eaters cycle, this is the only Rogue weapon that Preston can take. He probably doesn't really want or need it either since he'll be fighting at a 3, but hey, it could help you against rats?

Okay, Where the Gods Dwell seems to be made for Rogues with 2 absolutely insane cards to use in Rogue decks. Yet again with this card a Rogue has an ability for a free action. As far as I understand the Rules, the ability here triggers the bold Fight action, which than is an action on it's own, so it would add to Pay Day or Haste. Imagine being engaged with 2 enemies, using a fight action on the first one, putting it to 1health remaing, using Garrot Wire next to finish that enemy, afterwards using Haste to attack the other enemy and that just was 1 action! On top of it, a rogue does not have such strong competition on the Accessory Slot, there is no St. Hubert's Key or Holy Rosary or Police Badge to compete so it is very close to an auto include in rogue decks to me.

thakaris · 188
Disagree on the lack of competition for accessories. Rogues have both Crystallizer of Dreams (an amazing flex accessory) and Lucky Cigarette Case (an amazing econ one). A rogue taking lots of extra actions is going to be drawing a card almost every turn from the Cig Case. The Garrot Wire seems fine in some specialized decks, but you probably don't need its ability that much with good action economy, and you might have a lot of trouble even using its ability since it basically requires an odd health enemy. Without combat boosts the wire doesn't even hit that reliably, and the only Rogue for whom it would hit reliably- Tony Morgan- get a free fight action anyway and would vastly prefer either of the other accessories. The fact that it works with Haste is cool, and I could see it with Relic Hunter, but I definitely do not think it's that easy of a take. — StyxTBeuford · 12744 3/10/20
Ahh Action/Action/Ability confusion. I don’t think this qualifies for haste as, while it has the Fight action designator it isn’t *really* an ‘action’ it’s a triggered ability. I don’t think it qualifies for either Haste or Payday etc — Difrakt · 1180 3/10/20
As I understand RAW it qualifies: „ Some abilities have bold action designators (such as Fight, Evade, Investigate, or Move). Activating such an ability performs the designated action as described in the rules, but modified in the manner described by the ability.“ so the fast action designator on the Garrot triggers the action fight. As I do understand RAW, fight is an action and the trigger ability is fast which are different components. — thakaris · 188 3/10/20
Regarding the competition on the Accessory slot, in my opinion Lucky Cigarette Case is kind of redundant the way I play most Rogues. Usually I build my Rogues with a 2 Pickpocketings lv.2 and have them do a lot of evasion which will give them 2 cards if both are in play. That is already a pretty decent card draw, so I usually don't take the Cigarette Case. This might not be true for all Investigators (e.g. Jenny) and it is just my playstyle, but that is why in my opinion competition is not that strong. — thakaris · 188 3/11/20
It’s a free fight action, it does qualify for Haste. — StyxTBeuford · 12744 3/11/20
It's not a free fight action, it's a free fight triggered ability. Therefore no Haste nor PayDay combo. — Fishiste · 135 3/11/20
That is actually correct, it doesn't qualify for Haste, that was my bad. Similar to Shortcut 2 and Leo Anderson's ability- it doesn't actually cost an action so it doesn't qualify. — StyxTBeuford · 12744 3/11/20
Actually, looking back at the rules, I have literally no idea. Bold designators do *perform* the action. It doesn't require you spent it, only that you performed it, so I kind of feel it does count. I'm not going to say definitively one way or the other because this has been a headache for me today. — StyxTBeuford · 12744 3/11/20
Free Triggered abilities neither trigger nor interrupt Haste, just like they don't provoke AoOs or cost an action. — Xenas · 6 3/12/20
They dont provoke AOO because the rules ref specifically says they dont, but I found the reason why it doesnt work. Bold designators are modified by the cost, and in this case the modifier is a free trigger, so they are no longer actions and therefore do not count towards Haste. You still perform a Fight, but it’s not a performed action. — StyxTBeuford · 12744 3/12/20
For me, this is still absolutely clear. Haste triggers, if you PERFORM the same action twice, Pay Day counts the actions PERFORMED., they do not state anything about cost or require one of your investigators actions to be spent, Haste and Pay Day talk about PERFORM. Now, the rules for bold action designators read "Activating such an ability PERFORMS the designated action". Pathfinder does not qualify, since "move" is not bold on this card, if I remember correctly. — thakaris · 188 3/13/20
If it doesn't make Take the Initiative worse, it doesn't work for Haste. Thats my take. — Xenas · 6 3/13/20
@thakaris I understand that rationale and I was having trouble seeing past that as well. The reasoning, again, is the rules also say the designators perform the actions as modified. It turns out the fast triggers weirdly modify them to simply not be actions. Haste cares that they are performed actions, but modifying them to not be actions means they no longer count towards Haste (because they need to still be actions). If you want to hear it from Matt Newman himself, this thread explains it: https://community.fantasyflightgames.com/topic/301629-what-counts-as-a-performed-action-and-what-doesnt/?tab=comments — StyxTBeuford · 12744 3/13/20
I will correct myself on one thing though- this thing is actually a ton of fun with Tony. Maybe it is a bit redundant, but if you're specializing as a fighter it's a great end game accessory. — StyxTBeuford · 12744 4/1/20