As an additional cost to play Act of Desperation, choose and discard an Item asset that takes up at least 1 hand slot from your hand or play area.

Fight. You get +X and deal +1 damage for this attack, where X is the chosen asset's printed resource cost. If you succeed and that asset was in your play area, gain X resources. 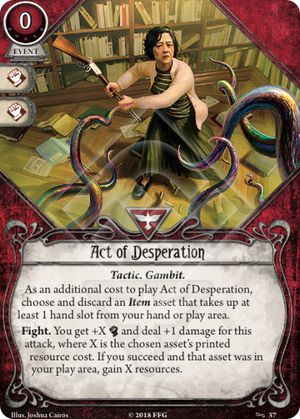 Have some real money-making fun by using Sleight of Hand to cheat an expensive item into play, then use Act of Desperation for a whopping payout! It's like cashing in a refund for something you didn't buy!

snacc · 774
Except sleight of hand needs the item to be IN PLAY at the end of the turn to return to your hand. You get the money, but you lose the item... — aurchen · 1 10/8/20
Correct, but you still paid one and got back probably a lot more than one. — StyxTBeuford · 12725 10/8/20
@aurchen yep that tends to be how refunds normally work! — snacc · 774 10/8/20
Of course, there are only about 8 one hand resources that cost more than 3, so you might be better off playing Emergency Cash rather than 3 other cards, although, to be fair, you don't get to shoot your enemy twice with Emergency Cache and then throw it at your enemy's head. So, hilarious but not efficient? — LivefromBenefitSt · 907 10/8/20
Someday, though, I want to empty the Guardian .45 Thompson (getting 6 resources), throw it at an enemy's head for 2 damage, and get 6 resources for my troubles. I am working on a Tommy Muldoon deck, so my dream might come true. — LivefromBenefitSt · 907 10/8/20
Note that, in addition to Tommy, Mark, Zoey, and Finn can also do the Guardian Thompson + Act of Desperation combo — Zinjanthropus · 208 10/8/20
This card is the single biggest tentacle magnet in the game. I can't tell you how many times I — Pinchers · 99 2/14/21
(Continued) I've pulled that blasted red token when the stakes are so high: +6 to hit, 2 damage, and 6 resources to cash out an empty gun and keep the party going. And guess what? Act of Desperation is somehow linked to the autofail on some infallible metaphysical level. But yeah--it's a great card. — Pinchers · 99 2/14/21
Considering the most recent taboo allows sleight to be used on Thompson again, you could sleight the Thompson into play for 1, shoot as many times as you can (Finn could play Ace in the Hole), then AoD for just a massive swing of resources. — Zinjanthropus · 208 8/11/21
7

Don't sleep on this card!

The real power here is in gaining back a bunch of resources from a spent item while also gaining tempo by dealing 2 damage for 0 resources. Cards that grant click compression tend to be among the best cards in the game. The "if you succeed" clause is also generally fine coming from the faction with both Lucky! and Live and Learn.

So what deck can use an Act of Desperation? Honestly, anything with Backpack, it has almost perfect synergy with that card and deckbuilding style. Mark Harrigan puts this under his Stick to the Plan to recoup the investment on his Lightning Gun or M1918 BAR. Survivors tend to be swimming in cheap items and card draw so it can act as a backup to Fire Axe (at least until they all upgrade to Ornate Bow or Timeworn Brand).

Then on top of all of this, the card has symbols like so much gravy.

The_Wall · 251
The most obvious abuse of this card is Yorick discarding a empty or jammed Old hunting rifle killing the monster and playing the rifle back at no cost — Susu · 35 2/1/19
In a Mark Harrigan deck you can even put a Well-mainted on your "big gun" to get it in your hand and replay it short after. — AlexP · 199 4/30/19
Amazing on Yorick for a different reason than noted; if you have an enemy infront of you early but didn't have time to put a weapon into play yet, you can throw a weapon from your hand to kill a weak enemy, then equip it from your discard as a free character trigger ability. — Antiundead · 19 4/21/21
IDEA FOR UPGRADED VERSION: 2xp version for +1 damage and let you discard any item in play (not just hand slots, but also body and accessory slots too). It would be amazing tech for Yorick, to throw an installed Backpack (2) with 3 items in it. Imagine throwing your backpack, killing a monster with it, and then using Yorick's free action to equip one of those free items... MATT PLEASE! — Antiundead · 19 4/21/21
3

There is a lot to this card because it gives you so many interesting options to work with.

First off, discarding stuff is usually negative, so it's a good idea to try and find ways to make the discard work with us instead of against us, use it on assets that you've finished using like an empty Flashlight or ammoless gun to recurse the cost, .45 Automatic is a good early target and later there's Old Hunting Rifle or Lightning Gun or whatever weapons Mark Harrigan went with. The discard mechanic has Yoricks name written all over it since he can discard the asset, then use the gained cash to replay it immediately, one trick is discarding a jammed rifle and replaying it immediately.

If that was the only thing this card did, why does it even allow discarding from hand? The option is there, so when do you use it? You might for example be in a circumstance where a shot from a gun would be wasted (like to kill a Ghoul Minion with a Shotgun blast). A Baseball Bat might break on the first hit and you need a +1 damage attack to finish the foe. It also means that you can get some use out of backup items that you don't need to get into play, like a Machete that you wont play because you already got the other one (also this bypasses the engagement requirement).

When all else fails to be useful you still sit on a nice boost.

That all sounds real good right? Well. Now have fun affording it a deckslot ;)