Deal 2 damage to an investigator at your location.

Forced - When the game ends or you are eliminated, if Dark Pact is still in your hand: Remove Dark Pact from your deck. Search the collection for The Price of Failure and add it to your deck. 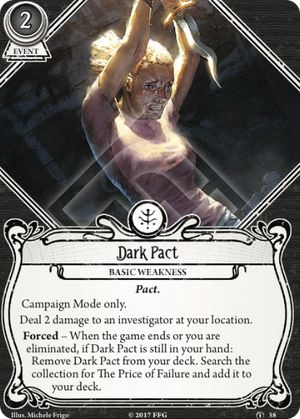 This card is a fantastic example of excruciating decisions that AH LCG is capable of producing using only two cards. It should never be looked at by itself, but rather in conjunction with its "upgrade" as well - The Price of Failure. Let's examine what this duo does in practice.

Basic weakness itself seems rather straight-forward: pay two resources to deal two damage to an investigator at your location (reminder: it can be assigned to assets). It can be you or one of your teammates - your choice (or is it? we'll get back to that later). This effect might seem similar to Dark Memory of Agnes, but the cost in here seems to be less steep. With Agnes's weakness however, it is possible to just hold it - as long as you are capable of staying sane, nothing happens. With Dark Pact situation is somewhat different: if you hold it till the end of the scenario, you have to exchange it for The Price of Failure going forward - and this is where fun begins.

This card is never in the vacuum of its own effect - it always poses the question: "are we in good enough situation to do it?". The question is also never static, the answer to it will shift with every play. After all, The Price of Failure is quite nasty in its effect, which is partially group-wide (the doom aspect of it). You might find yourself in the situation when you KNOW FOR A FACT that your next scenario is the one you can't afford to risk having The Price of Failure as a potential draw, but at the moment, both you and your partners sit on 2 health points left... Are you going to willingly diminish your own chances of success now by offing yourself or your partner, to not face the cost of insubordination in the future...?

At times, the answer might be easy, with everyone healthy and the board state relatively safe (or in the last scenario, when the future doesn't matter). But this is Arkham: how often will that be the case? Especially since the Dark Pact robs you of two resources as well, potentially impairing your other actions. But hey... decision is yours. (is it really...?)

Because here's my only pet peeve with this card: why doesn't it say Peril anywhere on the card? That one keyword would change so much about it, making it a very personal decision by design. Because as it stands, it is perfectly possible to make it a group decision, something that happens just because everyone at the table agreed upon such turn of events. But if only one person had to make a call (who should take damage, and when, if at all), that would change so much about their actions. They would be faced with the duty of postponing potential future disaster, but the only judgement they'd have would be their own. How exciting and crushing at the same time it would be...? (my internal "lovecraftian fun" calculator says it would be 2.3 times much more fun) It also wouldn't be out of ordinary, since Carcosa cycle already introduced cards that hamper player communication with the Peril keyword, forcing players to make their own mind and searching for their own solutions in cooperative environment. Making Dark Pact such a card would be the natural progress of this already known mechanism.

As it stands though, the card in and of itself is still good, and by by "good" I mean "bad"; it does what it was supposed to do very well. Cards that create interesting choices are always welcomed in my book, and by "book" I mean "binder".

Skid_the_Drifter · 128
Peril is currently only found on encounter cards, which Dark Pact is not. I can see how it'd possibly be more fun if this card had Peril, but that would bring in some nontrivial rules changing with it. — TheNameWasTaken · 3 5/21/18
Since you took your time to state the obvious, could you go further and propose what rules would have to be changed to make this card work in the same way that 4 cards from Carcosa expansion (all flavors of "Whispers In Your Head")? Because as it stands, it would appear that adding keywords "Peril" and "Hidden" would work effectively the same without changing any rules. I'd even argue that this would work even better, since no one would be able to tell if you have this card in your hand, as opposed to Carcosa's hidden perils. If your only line of argument is "Peril can be only on encounter cards" I'd say it's not something that can't be changed, and most certainly it wouldn't require "nontrivial rules change". Rules are set in place. Peril and Hidden are already established keywords. — Skid_the_Drifter · 128 5/21/18
It wouldn't require any rule changes at all; weaknesses in your deck ARE encounter cards. They have encounter card types and behave exactly as if drawn from the encounter deck. Adding Peril to this card would require literally just that: putting the text on. — SGPrometheus · 687 5/21/18
@SGPrometheus Dark Pact does not have an encounter card type, it's an event. That makes it not an encounter card. And it's by far not the only weakness with a player card type. — TheNameWasTaken · 3 5/21/18
@Skid_the_Drifter Well, at minimum the rules for what the Peril keyword means would have to be expanded. As currently written, Peril only triggers when an encounter card with it is drawn. I guess modifying the definition for the Hidden keyword and putting Hidden on Dark Pact could do it (I forgot about Hidden when writing my first comment). — TheNameWasTaken · 3 5/21/18
With all due rispect, all things you've listed seem rather trivial, as oposed to earlier "nontrivial rules change" argument. Nonetheless, it's all wishful thinking, cause the end product is what we have at hand. Any future developments are yet to be seen. — Skid_the_Drifter · 128 5/22/18
Let me clarify by what I mean by expanding the Peril rules. This being a cooperative game, the part where players discuss among themselves how to best take their turns is essential. To place a Peril-like ability on a player card would mean to either shut down all such communication while someone has Dark Pact in hand or only forbid the holder to discuss that card, or something in between. The hidden cards have an easy out here because they have different backs and all have the same cost to get rid of. So you can just say "I'll need to get rid of this thing this turn", and that's all the discussion you need. And even with this easy out, the Hidden rules don't actually forbid communication about the hidden cards, they only discourage it. — TheNameWasTaken · 3 5/22/18
What you're describing isn't that different than section called "Table talk" in "Learn to play" booklet, page 12: "The game’s areas of hidden information (the cards in a player’s hand and deck) exist to maintain the feeling that each investigator is a unique individual in the game world, and makes his or her decisions without complete and perfect knowledge of what everyone else knows or is thinking. A good means of maintaining this illusion is to not name, read off, or allude to individual cards that are hidden information (i.e., in a player’s hand or deck)." In the following example game creators give a proper hint as to how communication should be approached. Adding "peril" and "hidden" keywords would suffice without breaking the existing rules. I think your personal prefference is taking over what is and what isn't in the boundaries of the rules, however it is clearly visible designers intended for communication to be vague, and not clear information that you're trying to say is vital to the game. If you're already in open discussion mode and you don't care about that aspect of the game, I would conclude with saying that adding peril or hidden properties wouldn't really impact your experience, since you're already playing your own way. — Skid_the_Drifter · 128 5/23/18
Strapped for cards, make Dark Pact work for you. Add Decorated skull to your hand, kill a useless Ally you have (Art Student for example) take a damage, draw a card, gain a resource.), — bern1106 · 2 5/25/18
1

"Why hello there Dark pact." Amanda said with a blush "Fancy seeing you here beneath me~".

This does work right, nothing prevents Amanda from choosing dark pact and placing it beneath her, then its forcibly gone next turn, you have one turn with a card that simply can't commit to anything and then poof its gone?

(I guess the sticking point is are you choosing to discard dark pact by putting it under Amanda or not, and that feels more like a table to table thing than something that would have a solid ruling against it)

Either way, an averagely below average weakness.

Zerogrim · 262
I dunno; I think this would be forbidden by the you cannot choose to discard a weakness" principle, since you can't claim to be using it for a different reason. In different news, I got this as a "bonus" weakness in Dunwich, played it once, failed to play it a second time, thne had "The Price of Failure" milled out of my deck. Dunwich giveth and Dunwich taketh away, I suppose.... — LivefromBenefitSt · 937 2/11/21
I think that works, both raw, and I don't think it needs fixing, because turning off Amanda's ability for a turn seems like a reasonable penalty for it — NarkasisBroon · 10 2/11/21
@LivefromBenefitSt You can't choose to discard a weakness, but Amanda's ability doesn't involve choosing to discard anything. Placing a card beneath her is not discarding a card, and the effect that discards the card that was beneath her is forced so it works on weaknesses too. — TheNameWasTaken · 3 2/11/21
Also the rule is that you can't choose to discard a weakness from hand. Once the card is beneath Amanda you absolutely can choose to discard it. So it's fine to discard it this way — NarkasisBroon · 10 2/11/21
By the Rules as Written, nothing stops you from putting Dark Pact or other asset or event type weaknesses beneath Amanda. My understanding is that this is not RAI. However, any logic which would prevent it would be by classification 'weakness' and would inadvertently stop skill weaknesses -- but those must be allowed for her signature weakness to work! I will be surprised if any official correction is issued which would prevent Dark Pact from going under her. — Yenreb · 15 2/11/21
I think her weakness would still just about work on specific beats general. If her text hypothetically was identical except for adding non-weakness you wouldn't be able to voluntarily choose a weakness, but her forced would still read "when choosing a card to place beach Amanda, if this is in your hand you must choose it" which can override the non weakness part because it's a specific situation. It wouldn't be elegant though — NarkasisBroon · 10 2/11/21