Your deck must include at least 10 skills. Your deck size is increased by 5.

Before drawing your opening hand: Attach 5 random non-weakness skills from your deck facedown to this card.

Alexander Chelyshev
Into the Maelstrom #303. 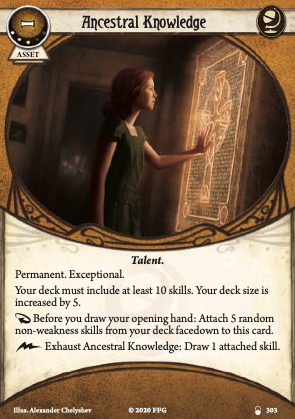 I must admit: I always ignored the "attach facedown" clause of cards like Diana Stanley, Crystallizer of Dreams or Backpack. I always considered this is fiddly and doesn't matter. Likewise, I thought, the facedown wording was just there to emphasize, that these cards are out of play, and therefore not eligible for effects from e.g. Well Prepared or Crypt Chill. But you could for instance choose without memorizing the order any card below Diana, if you use her Elder Sign ability or Twilight Blade. I always considered the cards below cards open information, even if they were "facedown". That's why I let them faceup on the table anyway. But on the other hand, Sefina Rousseau and Stick to the Plan do not have the "facedown" wording, and I'm not sure why.

With this card finally the issue gets very important. Because drawing cards at random and placing them facedown reads like, that you are not supposed to know what you initially got below and what you will get, when you trigger the ability. Is that's really how this card is supposed to be played? An action-free draw for 5 turns is still great even at random, but far less powerful than Stick to the Plan, which lets pick and choose and adds deck thinning for the same XP cost. I will still probably take this card in my next campaign as first upgrade playing Minh Thi Phan, but I would appreciate knowing if this card can be played even stronger, and you are just obligated to get random cards out of your deck during setup.

Update 2021-06-28: It had been confirmed in FAQ 1.9, (see the FAQs paragraph above) that I played half a "Return to Carcosa" campaign wrong. (Which was fine, I applied Grim Rule in the absence of official clarification.) I was happy to have the card, even in my weaker interpretation. However, it did have its disadvantages with Practice Makes Perfect. Because I never knew, how many Practiced skills were attached to this card, it was sort of a gamble to play PMP before the fifth round of the game. And by that time, it might happen, that I drew additional Practiced cards from my main deck. Looking forward to playing the card like intended for the second half of the campaign. Or will I? I will probably attach the cards faceup from now on.

Update after finishing the campaign: It turned out, that this card is really dinging PMP. I had 11 (not bonded) Practiced skills in the end, only kept Eureka! and Resourceful as Innate, yet the event still sometimes whiffed. That's not to say, AN is a bad card, but I would reconsider, if I might swap out PMP for something else with it. Also, a card I was never considering, Surprising Find, would be completely anti-synergetic with it. So while it sure is a great addition to any skill-heavy seeker build, you have to take this into account.

This card has totally replaced my original plan to run a Big Hand Studious Amanda Sharpe.

The flexibility Studious gives is threefold: You can get it in two instalments of 3XP, you get both cards turn 1, and you can mulligan them as well. But it stops there, while Ancestral Knowledge shines later on...

While Ancestral Knowledge has to be paid upfront in full and only gets the second card turn 2 - no mulligan - it allows for a nice flexible reserve, for when you need to fill the tank for a life saving Higher Education boost, get an extra bonus with Celaeno Fragments or Curiosity, save 1 resource when doing some Extensive Research, or even enable Farsight.

It also has the guaranteed Skill cards at the start of the game, helping enable Minh Thi Phan and giving Amanda Sharpe more options of skills early on.

It synergizes well with Dream-Enhancing Serum, since you will be having skills doubled on your deck - Big Hand builds without the early need to increase hand size!

And you can even get Studious with some leftover 3XP later on.

This card is soo good! If you dont have more than 6-8 skills in your deck with Deduction beeing one of them you have a HIGH chance of getting both attached.

This will be one of the first cards to purchase with Minh Thi Phan. Using skills like: Deduction x2, Sharp Vision x2, Resourceful x2 and Beloved to get alot of extra value out of this card.

What happens when you purchase this card? I mean your deck size is suddenly increased by 5, so you immidiately lack 5 cards in your deck. Can you just take five lvl 0 cards for free, or do you have to buy them?

Son_of_Gothos · 2
Yes you can take 5 level 0 cards for free. This is explained in the faq under point 1.18, or if you check the rules tab of this site look at the Deckbuilding section, the last 2 paragraphs. As a separate point, reviews aren't really meant to be rules questions. I recommend asking questions in the rules discussion channel on the mythos busters discord. They are usually super helpful there ^_^ — NarkasisBroon · 9 8/9/22
I for one love it when arkhamdb has extra explanations on rulings for cards that aren't well explained.What about the your deck must contain 10 skills part. Does it mean you cannot take this card if it does not (and that you cannot later remove cards so that fewer than 10 remain). Or do you get to make free exchanges such that it is compliant (potentially changing 10 cards, not just 5 if you had no skills before)? Or does it not enter play if not? — Kvothe · 2 9/10/22