effect: +1. You may heal 1 damage from an investigator or Ally asset at your location.

"I will find the answers, even if it kills me."
Cristi Balanescu
The Scarlet Keys Investigator Expansion #4. 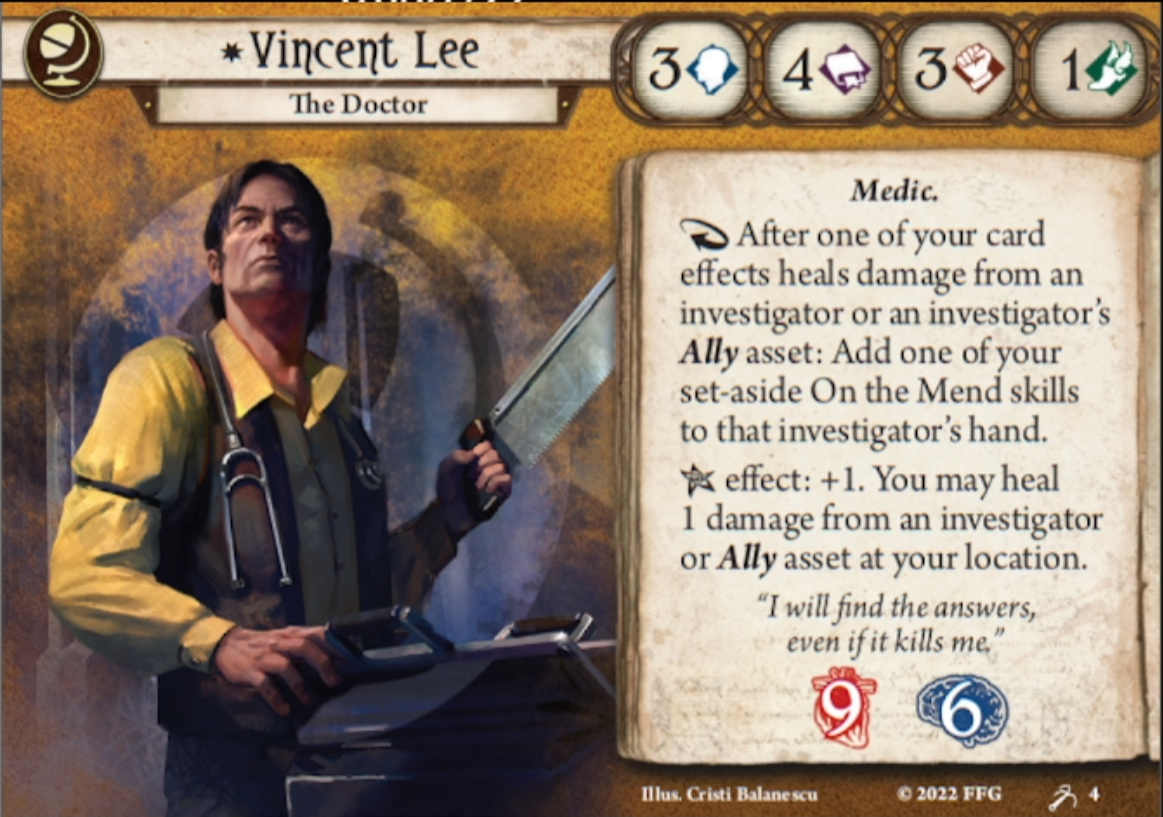 Deckbuilding Requirements (do not count toward deck size): Bonesaw, 1 copies of On the Mend, Wounded Bystander, 1 random basic weakness.

Additional Setup: You begin each game with 1 copies of On the Mend set aside, out of play.

After the third or fourth mutilated body showed up during his time at St. Mary’s Hospital in Arkham, Vincent Lee began to suspect that these were not mere wild animal attacks. When a young man died screaming in his sleep from a burst heart, Vincent knew for a fact that dark times were ahead. Taking a leave of absence from his position at the hospital, he has set out to ease the suffering of those afflicted by the spreading chaos, hoping that the trail of bodies will lead him to the answers he craves.
Deck Building
Search for cards usable by this investigator
FAQs (taken from the official FAQ or FFG's responses to the official rules question form)
Reviews
2

Vincent Lee is a very active support character. It’s hard to forget he’s in play when he’s handing you a gory skill card every turn. And he has a very easy way to do it: bandages and scrounging. If you can take the damage, and then certain campaigns you absolutely can, he can heal you and give you that +2 buff.

Vincent may be the most “feature complete“ character with one XP. Once he has Jessica Hyde, Dr. Lee becomes Dr. Jekyll. With his Bonesaw, you can take a damage every round, and get on the mend in time for the mythos phase.

Like Carolyn Fern, he has a secret advantage of giving other investigators three bonus XP at the start of a campaign, because “in the thick of it“ goes from penalty to opportunity.

Question, how do his copies of on the mend interact with Ancestral memory?

Do they count as skills in my deck for the 10 skill requirement, or are they like bonded cards?

I assume they cannot be put under ancestral memory?

Tgaland · 2
They are set out of play at the beginning of a scenario, so you can't put them under it. In regards to whether they count, I suppose you could say yes, but On the Mend is variable so it could make your deck invalid if players drop in and out. I don't think there's anything preventing them from counting for Ancestral Knowledge's skill requirement. — Tay5967 · 15 10/3/22
They do not count towards your deck size, and they are not even part of your deck, just set aside. So I would say no, they are not eligible to count towards the "10 skill minimum" requirement of "Ancestral Knowledge". — Susumu · 271 10/3/22
I would guess, not even "Whispers from the Deep" would allow Amanda to take only 9 other skills into her deck. (Not, that this would do much sense for her anyway.) If a card doesn't count towards your deck size, it shouldn't count towards other card limits either. — Susumu · 271 10/3/22
The issue is that they are included in his deckbuilding and set aside as a setup step, so technically I believe they would count. To not count, it shouldn't be listed under deckbuilding, such as Luke's Dream Gate, or the bonus permanent cards for front-side parallel Wendy and Roland. There are all sorts of issues with the wording of Vincent and his On the Mends. Setup occurs after mulligans, the number included is defined as deckbuilding, another player can shuffle one into Vincent's deck by doing something that would shuffle it into their own, etc. I'm honestly surprised they waffled the wordings so hard when they have examples such as Parallel Wendy and Essence of the Dream to template off of. — Death by Chocolate · 1256 10/4/22
the "[additional] setup occurs after mulligans" point is untrue in this case, per the FAQ on Sophie/Duke/Dark Insight -- if "you begin the game with" some card in a particular zone, that card is set aside before shuffling so it's not possible to draw it in your opening hand — Thatwasademo · 44 10/4/22
1

What makes heal decks more viable now is not cards such as Soul Sanctification but Vincent Lee the investigator's deckbuilding options. Because he can use any cards 0-5 that can heal, he has a wide and versatile library of deckbuilding options that was hitherto unavaiable for any investigator. Runic Axe becomes monstrous with him, and he can be a very effective fighter even as a primary cluever.

Innsmouth Conspirator · 38
Maybe dumb rule question: Can Vincent Lee have a fully kitted out Runic Axe, so long as it has Inscription of Glory? (For the record, I think Runic Axe + Glory is an amazing card & a great buy for Lee) — turtlegods · 2 12/20/22
Yes if a customizable gets an upgrade that makes it apply to someone's deck building differently you treat it how it now is, not its base card. — Zerogrim · 262 1/2/23