Spend 1 secret: Heal 1 horror from an investigator at your location. Add 2 tokens to the chaos bag. 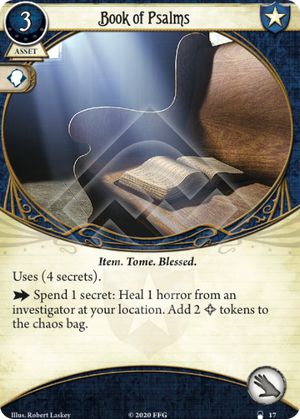 I was pleasantly surprised at how useful Book of Psalms is for a Sister Mary deck. On the surface, you see a fairly steep cost both in resources and actions, but the more of Mary I play, the more I realize the value of getting those tokens in the bag.

The obvious connection is with the Blessed Blade which I also reviewed and have extremely mixed feelings on. What I can say is without Book of Psalms, you'd need access to Keep Faith in order to ensure you have enough to land your hits. Keep Faith I think is indisputably a good card because it's reasonably priced and Fast. But Keep Faith being good can in some ways make Book of Psalms look bad. It costs you FAR more 's and resources, and the only real added benefit is getting some horror healing, which is nice if you are a since you more than likely have low sanity, but is not a particularly coveted effect.

To put things into perspective though, I want like to stress just how valuable those tokens are, even if you aren't intending to trigger them off of an endearingly finicky knife. It's been mentioned before that are more impactful on harder difficulties, and that having them around effectively counts as an Unexpected Courage. This is true but I want to take it a step further. If you pull a token and then pull a 0, you're probably not going to feel great about "loosing" the . But if you had committed Unexpected Courage to a test and pulled a 0, you're probably just happy to pass. Both tools are doing effectively the same thing (in this case nothing), but having banked some means you ARE going to be passing at least a few more tests than you ordinarily would have. This is particularly useful against certain treacheries where either the amount you fail by is significant or the treachery has a specific window in which it can be tested. can shore up your weaker stats, which is highly useful for . True, it is susceptible to rolling into itself and/or into an , but that's more par for the course for a .

The point I'm trying to get at is that one cannot simply walk into Arkham and expect to pass every test they come to, but there are a HUGE number of skill tests to be made throughout a scenario, and getting a +2 will soften the bag enough so that you can pass against things you otherwise wouldn't have. It gets only better when things like get nasty. It also works better the more you have in the bag, and basically this means that when you are nearing the end of the scenario, 's are suddenly very precious, 's have reached new lows of punishment, and yet the bag is also packed with that counteract the crushing weight of those final few rounds, albeit not always directly.

For an extra resource and what will amount to 4 s in total, this single card can get you 8 , nearly capping you out. It may sound obvious to hear, but there is a significant difference to making tests when you have a large quantity of in the bag then not. And if you don't need them, Sacred Covenant is permanent and only 2XP. You're probably not going to read the whole book all at once however, and drip feeding them works just fine. It cost you an action, but it gave you 2 for (probably) two actions later.

As with any card that takes an action to play and an action to activate, you do have to evaluate how much you can spare on an effect like this, especially in solo. What I found in multiplayer is that taking a moment to generate a few tokens would dramatically impact my ability to trigger Blessed Blade damage as well as get through obnoxious treacheries that our favorite nun is ill equip to deal with. This is doubly crucial because Mary requires more deck slots to support her fragile knife than perhaps any other .

There are better effects than the ephemeral nature of the mechanic to be sure, but at lvl 0, Book of Psalms can accelerate your quantity that then enables so many other effects. The value of a token is, I might argue, much greater than a 's use of them which tend to be more one and done. If you're bringing healing, you can do much worse than Book of Psalms. I think my opinion on this card is more favorable than its companion because there are ways to leverage and manage the tokens, meaning they have additional value far beyond passing a skill test here and there, which in itself is good. When I think of a , I think of Reliable... okay not the card but the state of being dependable. The Blessed Blade is the antithesis of reliable due to its pitiful boost and demand for a full bag of to be at all helpful. By contrast, Book of Psalms just gives you what you're asking for, and even throws some horror healing to sweeten the deal.

The other card to be mentioned at lvl 0 is Hand of Fate which I was also surprised to see how often that saw play, but my issue with it is I need an enemy and a hefty chunk of resources to play it. Generally, I would play Book of Psalms turn 1 and start blessing the bag whether we need the horror healing or not, and in this way, the book gets Sister Mary's much needed tempo right out of the gate. I think it's a great fit for her, and a much better alternative to cards like First Aid. If we get an upgrade in the Return to TIC, I would love to see the speed increased, perhaps to a , though I get the feeling that is a bit overly optimistic. More likely, it would increase the number of dropped in the bag, which I'd unquestionably purchase.

In Arkham, we know that faith can keep us sane. The Holy rosary is one of the few zero xp sanity adding assets. But you can throw that on for one action before leaving the house. The book of Psalms is going to take us more effort. This is a support card. Generally, it’s not useful to take two actions to heal one damage or horror. (Every healing asset requires us to put it in play after all.) Every three actions you take, generally, the encounter deck is going to drop more problems, which means we need other reasons to play this.

First, we could be a therapist. Carolyn, being at the top of medical science in the 1920s, is willing to use Hypnotic Therapy and prayer. She gets a buck and can heal one or two san while adding bless tokens to the bag. Super effective: 8 bless tokens and a net profit for the team.

Second and more obviously, this is useful for a support Mary or Mateo. Most of the Conspiracy investigators have good sanity, but Silas has five. Keeping him alive while you feed the bag plays into the support archetype.

Least obviously but most thematically interesting is taking this card with Joe or Roland. As blue/yellow investigators, they find Astounding Revelations...and discover secrets in the writings of King David! The idea of secrets in the Psalms may make money indirectly, because people are still publishing books to that effect more than 100 years later.

Which is enough to cause you sanity damage.

MrGoldbee · 1103
I'd add that it's an interesting card for Parrallel back Daisy, or Daisy with Versatile. — mogwen · 224 10/6/20
Finally a cross-class tome parallel Daisy might consider. — OrionJA · 1 10/6/20
Yup, for Daisy it's WILD. — MrGoldbee · 1103 10/6/20
Good thing it uses a hand slot. Because Guardians don't use their hands..........GRRRRRRRRR — TheDoc37 · 454 10/7/20
I like this in Skids or Leo since Rogues get some extra actions. Otherwise it is too action intensive and competes for a critical hand slot for most. Carolyn is obviously a good target and possibly the others mentioned. — TWWaterfalls · 775 2/1/21
Skids and Leo A. can Sleight of Hand this into play and spend a whole turn healing up while getting 6 blessed tokens. Perhaps not great, but compliments guns and Flashlights as SoH targets. — ArkhamArkhanist · 4 2/28/21
A blessed-token parallel Daisy Walker could consider this tome too... — Lilan · 76 4/23/21