Limit 1 per deck. As an additional cost to play this card, you must search your bonded cards for 3 copies of Bloodlust and shuffle them into your deck.

: Fight. You get +1 for this attack for each attached copy of Bloodlust. This attack deals +1 damage. If this attack defeats an enemy, place 1 resource on this card (from the token bank), as an offering. 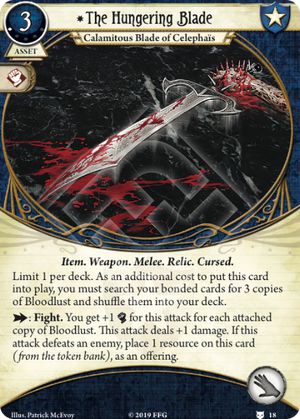 So this card (and it's coupled weakness Bloodlust) is a bit confusing, so I'm going to give a quick summary here so that you don't have to switch between the two cards's pages:

This actually reminds me of the good old core set Knife; two options for an attack, one standard, and one with extra damage but you discard something. And just like Knife, not utilising the secondary attack is a waste of the cost to play it. If you're using The Hungering Blade, then you should have a decent chance of succeeding combat checks from the moment you equip it, otherwise you'll be hard pressed to get those offerings. The extra then is a nice bonus, but not something you should be relying on, especially since +1 damage is more valuable than +1 attack.

Now about the horror incursion. Despite being the most suited for extra damage without extra , Mark Harrigan CANNOT take this card; doing so would be suicide alongside Shell Shock. Given that the other 5 investigator cannot take it, and anything less than 4 would leave one struggling to get offerings in the first place, the list of viable investigators shrinks to the rest of the guardians (that aren't Carolyn Fern), Joe Diamond, and William Yorick: 6 total. Even so, NONE of the investigators mentioned above have higher than 6 sanity, and given the random nature of your deck, you are subject to the whims of fate with this card (I mean, even more so than usual).

So... I don't think highly of this card. Some real jank would be required to get it going, like a Desperate "Ashcan" Pete, or a Wealthy Jenny Barnes. But I'm not holding my breath.

EDIT: As was pointed out, Ashcan and Jenny can't take this card, so please ignore the last paragraph.

Lucaxiom · 3543
Played it succesfully in Mark. Was no suicide. — trazoM · 9 10/15/19
Diana Stanley? — mattastrophic · 2506 10/15/19
It is level 1, so Pete and Jenny can’t run it. Wealthy Skids could, and Tommy run enough sponge assets that the horror isn’t a big problem. The bottom line is that the blade is a low xp conditionless, actionless +1 damage that may require outside boosting and sometimes kills draws or deals Horror. Especially if you’re an on-the Hunt deck, keeping up the kills shouldn’t be hard, and in The Dream Eaters specifically, a Swarm enemy can easily fill up its offerings very fast. — Death by Chocolate · 1256 10/15/19
I'm pretty sure you don't get -1 <span class="icon-combat"></span> when you shuffle Bloodlust, because the skilltest is already initatied when you do it, and thats and effect that lasts until the end of the skilltest. — Bernat · 574 11/3/19
I honestly think Mark is a better option for this, but you need to build appropriately for it and reliably hunt enemies down. (And that's a fairly big 'but'.) His ability means you'll be drawing a whole lot of cards, so if your kills are up, he's not quite as impacted by the consumption of 3 draws turning into +1 on his primary weapon. Even without those kills, Mark should be building around his sanity pool, meaning he should have at least a couple of options to mitigate the horror on a whiff or two. However, if neither of those are true, things can go pretty catastrophically. I'd say this is a better option for him in larger games, but wouldn't want to risk it in smaller ones. — Ruduen · 825 1/12/20
Seems like the main issue you would have (at least with non-Mark Guardians) is getting enough offerings on it that you can actually equip the first Bloodlust or two. It gets pretty good once you're at +2. Also notable that Zoey Samaras can take Mr "Rook" to help find Bloodlust. — Zinjanthropus · 212 2/23/20
My sister used this in a Tommy deck. I was Agnes and scryed the encounter deck for enemies to ensure she had something to kill every round. Worked well enough. I think if you can get it up early in a scenario with many enemies, you're in good shape. Probably less ideal for solo. — LaRoix · 1608 5/2/20
^Sounds like a cute combo but unfortunately spamming scrying just to enable the blade seems like a waste of actions. On the Hunt and "Let me handle this" feel like better blade enablers. Also I think Roland might be a good choice as well, since if you're aggressively hunting for enemies, might as well get bonus clues from Roland's ability. — flamebreak · 19 12/30/20
Leveled up Scry is fast. :) — MrGoldbee · 1313 2/9/21
4

With "The Scarlett Keys Investigator Expansion" The Hungering Blade gets quite nice new synergy support.

Obsidian Bracelet is cost efficient soak because it can tank Bloodlust. Bloodlust is a treachery and the bracelet gives soak to treachery horror.

Great synergy exists with Hunter's Armor with the "Hexdrinker (3)" upgrade. It says "Hexdrinker. After 1 or more damage or horror is assigned to Hunter's Armor from a treachery effect, you may exhaust it to draw 1 card." This compensates for the dead draw of Bloodlust.

This might be quite effective with tanky builds for e.g. Tommy Muldoon.

I initially dismissed this as an option in Nathaniel Cho but after giving it a shot, it might be a decent option in him. It has the same use case as Mark, with Cho not really needing the extra from weapons. It also works alongside Boxing Gloves, if you're willing to run Bandolier so you can have both. The fact that it's a one-off weapon is also mitigated by the fact that Cho doesn't really need weapons over his fight events, and his unique card can search a weapon.

Is this good? Well, the obvious downside is that as soon as the blade's out, you need to kill with the blade, and not kill with fight events. Cho's fight events range from 2 damage utility events - Clean Them Out, ["Get over here!"], and the lower levelled Counterpunch and Heroic Rescue - 3 damage events like Monster Slayer, Mano a Mano and the levelled Counterpunch, to the big guns of Dynamite Blast and One-Two Punch. So if an enemy has 3 health, do you use a 3 damage Cho event or a 2 damage one followed up by a Hungering Blade hit? Or do you not waste the event and just hit twice with the blade? In that case, is there much point in running the blade at all when you could just hit with an event then make a normal punch? Obviously the more enemies on you, the better - you can finish off a 2-4 health enemy with an event followed by a blade hit, then kill a 1-2 health enemy with a blade hit to get 2 charges, but whether this is going to happen frequently is questionable.

Perhaps you can simply run fewer damage events, and more utility spirit-traited events like Stand Together or "I've had worse…". But then what happens if you never draw the blade?

I think there may be a balance between fight and utility events that can make this work, depending on the scenario. My main problem with building Nathanial before I got Dream Eaters has been that there's only really one deck for him - load up on fight events and ways to draw boxing gloves. But The Hungering Blade makes me think there are some more niche builds that might have a place in him. I enjoyed the build on my first try, but I think a little more testing is required. Still, it's a deck I'm happy to test.

SSW · 190
What about backpack 2 to search for gloves, bandolier and the blade? Prepared for the worst with 0 xp? — Django · 4420 2/10/21
I'm not sure what's the advantage of this card over a Machete on such a Natcho build. Even ignoring the possibility of taking horror due to bad luck, it will cost 3 draws, and Nat likes his draw to cycle events. The Hungering Blade when charged up gives a higher fight bonus, which as you say Natcho doesn't need (especially with Bandolier and Gloves out), and doesn't require engagement, but Natcho can just punch his way through them or Get Over Here/Heroic Rescue/Rightous Hunt etc. — suika · 8832 2/10/21
You can shuffle Bloodlust into your deck for extra damage, but using that regularly means it'll cost you even more draws and delay your cycling of fight events back into your deck. — suika · 8832 2/10/21
1

Decent card for a sustained combatant who happens to have great draw speed and deckspace for tank allies and items. (I.E Mark Harrigan's name is written on it).

With a tanky build that can handle a bit of extra horror pain and incentive to wield a non-ammo weapon, several haracters can make use of this thing. The / characters all have great tanking properties making them naturals at using The Hungering Blade.

If you're likely to have a bit of trouble with horror (like a Roland Banks or Joe Diamond), then stay the heck away!