Watcher from Another Dimension

Revelation - Secretly add this enemy to your hand.

You may fight or evade this enemy while it is in your hand (as if it were at your location). If you succeed, discard it from your hand. If you fail, spawn it engaged with you.

Forced - When your deck runs out of cards, if this enemy is in your hand: It attacks you (from your hand). 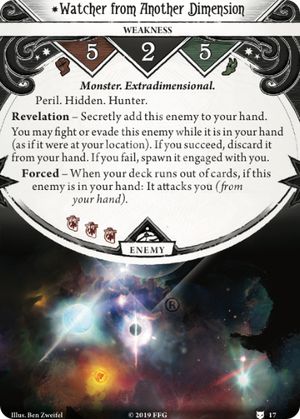 This has very quickly become my favorite investigator specific weakness in the game.

The Watcher looks incredibly menacing. 5 fight? 5 evade?! Poor Patrice only has 2 and 2 , how is she somehow supposed to not fail a test against it? Worse, if she does fail, it'll chase her the entire scenario unless she somehow manages to hit it for 2 damage.

The Watcher has two main routes through which it threatens you while it's in your hand. Firstly, it will clog up your hand, dropping Patrice's precious 5 cards per turn to 4. Second, it will hit you for 3 damage every time you cycle your deck. So your options are to either A. deal with the Watcher to free up your hand and eliminate the threat or B. leave it in your hand and tank the damage when it comes. I've found that option A is much better than option B, but it is perfectly possible you draw this card really late and have no answer in the moment, so we'll go over various ways you can either successfully toss this guy aside or tank the damage.

Here are some of the ways I've found you can most easily deal with the Watcher:

(For both of these options you could also take the relevant cat from Miss Doyle. Hope lets you evade at base 5 while Zeal lets you fight at base 5 ).

The last thing you need to know about the Watcher is that you want it dealt with as early as possible. The reason for this is because of Patrice's effect: "+1. After this test ends, you may shuffle all but 1 card from your discard pile into your deck." What this means is that you want Patrice to continue taking as many tests as she can just for the opportunities to draw the token. Once she does, you can leave Watcher in your discard and reshuffle everything else into your deck, thereby preventing it from clogging up your hand for several more turns. You could elect to use Olive McBride to find it more reliably, though I personally don't think it's necessary unless you want to do a seal based support Patrice.

StyxTBeuford · 12699
Technically the rules of peril prevent you from having other players help while it is being drawn or while the card is resolving. Neither of those cover you taking the attack action or an evade action - which are resolving actions (or possibly triggered or constant abilities on cards). If it had the action printed on the card - such as “Action: Take a FIGHT or EVADE action against the Watcher as if it were at your location, etc” then it would be clearly in the middle of resolving the card when you took the test. Otherwise it is like saying that a peril card with ‘revelatation - choose a stat, everyone takes -2 to that stat this turn” would prevent anyone from committing cards to your (or anyone’s?) that-stat tests this round. — Death by Chocolate · 1131 10/16/19
Hmm, I wonder why it even has peril in that case? — StyxTBeuford · 12699 10/16/19
Well, for one thing, ALL hidden cards printed so far have the peril keyword as well. But it may be intended to prevent help on the tests as well. — Death by Chocolate · 1131 10/16/19
Peril prevents Diana's signature card from countering it and maybe others that have not been released yet. — Django · 4140 10/18/19
Regarding Stray Cat, this was added to section 2.9 of the FAQ in version 1.7: — CSerpent · 107 3/17/20
"If an ability “automatically evades” 1 or more enemies, this is not the same as automatically succeeding at an evasion attempt. As per the entry on “Evade” in the Rules Reference, if an ability automatically evades 1 or more enemies, no skill test is made for the evasion attempt whatsoever. Consequentially, because no skill test is made, it is not considered a “successful” evasion. The investigator simply follows the steps for evading an enemy (exhausting it and breaking its engagement)." — CSerpent · 107 3/17/20
Yup, that was very literally just addressed in the last FAQ, but right before then it was heavily implied Stray Cat works. Now it doesn't again. — StyxTBeuford · 12699 3/26/20
How does this work in multiplayer? Will the Watcher stay hidden even if engaged with Patrice and can other group members help out to deal with it? — Nezuminotabi · 3 5/3/20
Reading through the rules again it looks like "hidden" is a keyword only used in combination with hand cards, so I presume no change to any normal enemy if the Watcher gets on the board :/ — Nezuminotabi · 3 5/3/20
Hidden has no effect on anything once its on the board. — StyxTBeuford · 12699 5/30/20
Guys, small question here. — ambiryan13 · 147 11/11/20
Can this monster be evaded via fire extinguisher, but with it's secondary effect? — ambiryan13 · 147 11/11/20
Survival instinct lvl 2 has the same thing, although it doesn't work as well with Patrice. — ambiryan13 · 147 11/11/20
Both of those cards have "enemies engaged with you" and I think the monster is not considered to be engaged with you. — ambiryan13 · 147 11/11/20
Quick question, can this card be discarded via exces hand size (9 cards during the hand size check)? — LordWolfen · 1 4/29/22
The monster has to be considered engaged, otherwise you couldn’t initiate a normal evasion attempt either. — Eike · 1 6/19/22
No, you can’t discard “hidden” cards for any reason except their own printed effect. — Eike · 1 6/19/22
2

Another enemy signature weakness, with some Erich Zann flavor (let's ignore that Zann played a violoncello, not a violin, and Patrice should properly be hauling a chair around). Looking at the two elements, the effect and the discard condition, we get:

The effect: This is a pretty interesting card; while it is in hand, Patrice only needs to succeed at a fight or evade test (importantly, you do not need to do 2 damage, merely hit). StyxTBeuford, above, gives a very good rundown of the various approaches and options. Additional tools Blur (1) and Blur (4), Sword Cane, Brand of Cthugha (1), and Brand of Cthugha (4). As usual for Patrice, a copy of two of Cornered, plus skill cards like Promise of Power and Last Chance can help make that crucial test. Importantly, the Peril and Hidden keywords only matter if the Watcher is in hand, so, if the test is a failure, other investigators can come to Patrice's assistance. 3 damage is no joke! The most significant effect of this card is that it effectively reduces Patrice's hand size to 4 as long as it isn't addressed, and that reduced size really affects her ability to dela with this weakness.

The discard condition: Succeed at a fight or evade test while it is in hand or kill the damnable thing.

All in all, this is an average signature weakness, below average once Patrice has built up some XP. It might get knocked up a level in Hard or Expert, where failure becomes more likely.

LivefromBenefitSt · 887
actually, the Peril keyword only matters while you're drawing the card - so if you fight or evade it from hand other investigators can help you with that too (committing cards, etc) — Thatwasademo · 42 4/23/22
(printing Peril on every Hidden card was a mistake, because people keep assuming the restriction lasts for longer than it actually does, and it would have been better to make the fact that you don't show everyone else the card between drawing it and putting it in your hand part of the definition of Hidden) — Thatwasademo · 42 4/23/22
That's a useful thing to remember (and I am guilty of conflating the two), but I am not really sure it matters in this case. The only card I can think of off the top of my head that the Peril would block is Ikiaq, and the Hidden should prevent other investigators committing cards *in spirit* at least, since you shouldn't tell them what you are doing until the test is resolved. Other investigators definitely cannot trigger the special ability while it is in your hand, so they can't take the test for you. — LivefromBenefitSt · 887 4/23/22
You have to tell them that you're taking a test anyway, so I disagree that Hidden should stop them committing cards, even in spirit. Just say for example "I'm testing Agility vs a difficulty of 5 for some reason *cough cough*" if you want to be cagey about it, or if you want to be somewhat more technically correct while still somewhat thematic "I'm evading an enemy you can't see". — Thatwasademo · 42 4/25/22
0

To make it super clear, I'll ask this question for confirmation:

If Patrice draws this card during upkeep, she can choose to go first in the next Investigator phase. If she has 3 actions for her turn, she can spend action 1 to try to fight/evade the Watcher in her hand. If she succeeds, the Watcher is discarded. If she fails the test, then it enters play engaged with her. She can choose to do nothing for her last 2 actions. Then, the fighter of the group can kill the Watcher. Right?

If that's the case, then this weakness seems fairly manageable. If successful, it only costs Patrice one action and maybe some resources or a charge or a card to deal with the Watch. If not successful, then it loses Patrice a turn. Not the most terrifying, but definitely something to plan for considering it can do 3 damage during the enemy phase.

VanyelAshke · 165
This enemy only attack Patrice by Forced ability when it's in hand (check hidden keyword). I think, the main penalty is to decrease the actural hand size. — elkeinkrad · 311 12/10/20
If you fail, then it's a normal enemy that your fighter can probably take care of with a single (difficult) fight action, but which can attack you as normal, yeah. If you don't attempt it it won't attack you until your deck runs out of cards, as elkeinkrad said, so most of the time you also have a turn or two you can just let it clog up your hand if necessary. — Thatwasademo · 42 12/10/20
I would advise making any attempts against it with your last action of the turn, too -- since hidden enemies aren't considered engaged / in your threat area unlike hidden treacheries, you can do whatever you want with your first two actions and not have to skip them like you suggested. — Thatwasademo · 42 12/10/20
Well failing and then not following up for 2 actions means you’re spending at least 4 actions dealing with it, which is pretty costly. But I’ve found Patrice with a few commits and a Fire Axe can easily take care of this. Fire Axe works great as you can use the Axe’s ability and then follow up with a 2 damage attack boosted by cards only. — StyxTBeuford · 12699 12/10/20
Can't a guardian take care of it for her? — tasman · 1 11/23/21