Choose and discard 1 card from your hand and exhaust Patrice's Violin: Choose an investigator at your location to either gain 1 resource or draw 1 card. 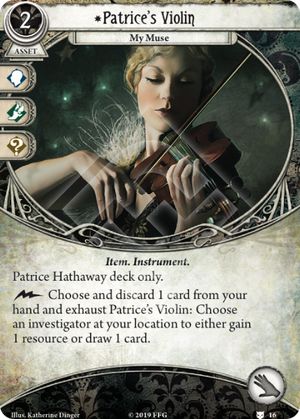 This is Patrice Hathaway's signature card. Were this in any other investigator's signature, it would be quite underwhelming... one might even say it's horrible. Most people will agree that cards are one of the most important materials in the game, so why would you trade it for a resource? Even discarding a card to draw another is underwhelming when there's plenty of ways to draw cards (often more than one) without losing a card.

But Patrice isn't another investigator, she's...well, Patrice! One must remember Patrice draws five cards, then ditches them, and then draws five more in every round. In the context of this card, it means this: You're going to lose any cards you don't play or commit to a test. If you're going to lose it anyway, might as well as trade it for something else, right? Personally, I prefer the resource, since you really don't wanna be in a situation where you draw an asset you want to play...but you're too poor to do it, forcing you to either commit it to a test or lose it.

This card can also work wonders with cards that are best done when you play from your discard pile. (Like Winging It!) and may also have some wacky, although unlikely, combos! (Like having two copies of Fortuitous Discovery in your hand...violin one and use the other!)

The cost of 2 is quite cheap, not to mention that it pays for itself in two turns and generates more resources forward. A wacky combination of icons that can give you two willpower, two agility, or one of any other skill. You're still better of playing it and only committing it when you KNOW you won't be able to play it.

Finally, how is it only one hand? I'm not complaining, it only adds to the card's greatness, but even in the artwork you see her use both hands for the violin. Guess you don't need a bow when you play the violin with a .18 Derringer.