Forced - After Miss Doyle enters play: Search your bonded cards for Hope, Zeal, and Augur. Randomly choose 1 to put into play and shuffle the other 2 into your deck. When Miss Doyle leaves play, find each of those assets (even if they are out of play) and remove them from the game. 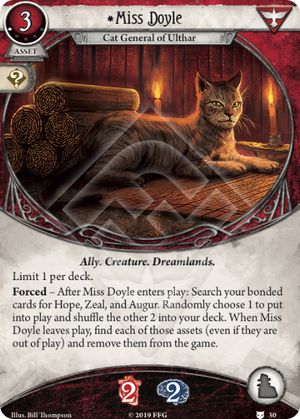 Miss Doyle is a cool cat, but perhaps the cats of Ulthar are not what the doctor ordered?

TL:DR. A little expensive in resources, it's luck dependent and it's really a 4 XP card since you're going to want Charisma too, Patrice Hathaway is a crazy cat-lady though and is rarely seen without her furry friends. Generally high card-draw decks should consider this card when they level up.

These are the cards Miss Doyle brings to bear, one randomly from the start, the rest will show up, eventually.

The cats are good, no question about that, if you ever had Duke in your play area you will know that replacing your base value is fun and good, the variety of cats makes then attractive to a variety of folks, all the will love Augur for the 1 / turn replacement, it's a great starting point for and some characters will search aggressively for this one cat and never use the discard outside niche circumstances. Hope is somewhat less universally liked since much of the faction sports base values at 4 or 5 already, he's going to get discarded as soon as another cat hits the discard pile, if not sooner. Zeal is also going to see a lot of discards, her replacement is marginally useful without bonus damage to capitalize on, however an autohit attack is a sparkly wonder indeed.

Executing the "furry flurry" is great fun, I speak of course off those moments where you've got 1 cat in play and at least one in the discard, that moment where you throw a cat at an enemy to finish it off, another cat at another enemy to distract them, a third cat at the nearby mysterious wallpaper, to latch onto and scratch it off to reveal the elder sign underneath, bonus points if you rock 2x Charisma and more cats to make this a 5 cat combo move.

Luck IS a factor for the cats, you'll routinely be herding them only to realize you've got the wrong one in play and none in the discard, this is especially annoying when you play Miss Doyle and come up with Hope or Zeal without any enemies to use them on or no intention to, "I could Hope this guy and keep moving, or I could hit it with my Meat Cleaver and not worry about it henceforth".

Another downside to the cats is their tendency to kill draws. You don't draw Miss Doyle once, you draw her 3, 4, 5+ times per scenario! Once she is in play and you're flexing the cats, finding specific cards you need will be a little harder, it might be worthwhile to try and be set up before you play her. I'dd go so far as to say that the cats are a liability, a Weakness, if you put them in a full on deck, Agnes Baker stay away!

Note that the shuffle mechanic is a "may", you can drop the cat in your discard to have it ready for future combos.

The cats are actually very fluid once you find them, characters with deep discard piles and rapid draw speeds (Minh Thi Phan, Patrice Hathaway, Silas Marsh) will like them best, the cats are most consistent if you can get them into play for free via their inbuilt mechanics. That said their self-play based mechanics are rarely "feelsbad" moments and wont leave you stuck, since their Fast keyword lets you brute force the most immediately useful cat onto the field if they wind up in your hand.

This also means: The cats are expensive. You pay a relative fortune at 3 resources for Miss Doyle and a random cat, and paying 1 resource here and there (probably 1 or 2 times per scenario) makes it a bit harder to run this thing with certain ever popular builds. There is also the hidden cost of Charisma, Miss Doyle is a 1-off, therefore you really want some other ally around as well (probably Peter Sylvestre, Mr. "Rook" or Jessica Hyde), making Charisma a necessity.

The cats get quite a bit of perfectly decent support in-faction, you can entice a cat with the contents of your trash bin, getting the combo going if all the cats got discarded, and you never know when you'll run into a cat. Zeal can deliver an autohitting Stunning Blow and Hope can distract the whole room with a Survival Instinct, with the right class combinations you might even land Deduction or Vicious Blow in this manner. Note that as allies you can hit them with Calling in Favors, which is a pretty neat trick to get a different cat or some bigger friends into play.

Patrice Hathaway is definitely the intended audience, her ability finds kitties at breakneck speed, and the kitties in turn go back in her deck and help her slow down, also ensuring that she'll keep finding kitties even faster as her deck shrinks! All the stats are useful to her, although you might find yourself gagging on Zeals furballs. Preston Fairmont and Calvin Wright also like the cats, for obvious reason, these latter two would still need to find ways to up their draw power to make the cats consistent and not gimp their decks.

The low-key "Huh, more useful then I thought" character with Miss Doyle is William Yorick, he really benefits from all the different cats and can play a few tricks with his innate ability to control which cat is in play, notably you can discard the one cat several times and get it back repeatedly, this is especially useful with Zeal and Augur. Also, you'll get the same kind of "Huh, more useful then I thought" thought if you play the cats in a Dunwich campaign, that campaign more then any other attacks your deck and has a high chance to find your cats for you, it's like Lupara in Forgotten age, the perfect hunting ground.

All in all Miss Doyle is a fine card, I bet you can find some particular interactions where she's gamebreaking, but the happenstance nature of her cats reigns in her power a lot, she'll be a stable in Patrice Hathaway, for whom finding single copies of an ally is not an issue and fishing for the other cats is no issue at all, rather all the "dudded" draws from drawing cats will be a boon for her.

The weirdest bit about this card is that, because of the luck elements, she actually feels a lot more like a card, although she is definitely most useful in the faction.

This is a length review and perhaps not terribly positive, but I would still recommend this card, it is definitely not a dud and I greatly enjoy playing it, both as a cat-person and as someone who likes cards that have crazy mechanics.

Tsuruki23 · 2150
Cute Cats.I suggest to give it Myriad,so I can see these sweety quickly. — shuiping · 2 10/10/19
It's a bit misleading to say "it's really a 4 XP card since you're going to want Charisma too". Hope, Zeal & Augur DON'T use an Ally slot, so you don't need Charisma. Yay! ^^ — Yellow_Peril · 1 11/7/19
Yes, but Miss Doyle does take the ally slot, and she's probably not going to be a first choice. For Preston, Lola Santiago seems like a much better use of that slot. That's where charisma comes into play. — Azriel · 1 11/11/19
this test is automatically successful, Can we commit when this test automatically successful ? — h2ovn · 1 12/5/19
Yes, you can. https://arkhamdb.com/rules#Automatic_Failure_Success — vidinufi · 51 12/16/19
Moar cats! The black cat! More for our cute felineup — chirubime · 8683 3/12/20
You shouldn't ever really be paying to put down any of the effect cats. Discard them by committing them and then pull them out for free after performing the automatic success with the one you have out. — Tilted Libra · 23 6/5/20
I've only played the cats with Patrice and they really shine with her. They've saved me so so so many times, and with her deck cycling you can get almost whatever cat you want whenever you want it. To be honest, I didn't think they'd be as effective as they have been. I'm interested to try them with other investigators. — DavidRyanAndersson · 44 6/19/20
Mandy Thompson can't use Miss Doyle because she can only have "up to 10 level 0–1 EVENTS and/or SKILLS of your chosen secondary class." — Gibbs_M · 1 2/9/21
Hope's automatic-success Evade is also a highly-convenient way for Patrice to deal with the Watcher from Another Dimension. — anaphysik · 57 2/20/21
(Zeal's automatic-success Fight as well.) — anaphysik · 57 2/20/21
5

Hope, Zeal, and Augur all share a common mechanic where you can discard them to test at a base of 5, and the test is automatically successful. This means that the test difficulty is 0, and no chaos token is drawn, but you still get to commit cards to the test. In other words, you get a guaranteed success by (at least) 5, and you can make use of this to assuredly trigger not just cards that have if successful effects, but those with succeed by X effects. Cards with automatic successes aren't terribly common, and the cats provide a reliable, repeatable way of getting them.

Since you have to trigger a Fight / Investigate / Evade action on the cat itself, this is limited to skill cards and reaction abilities on assets. Most of the succeed by X cards are in the faction, making a / pairing an ideal investigator choice. skill cards include Quick Thinking, "Watch this!", and Nimble at 0xp, and Momentum and All In with XP. For assets, there is Gregory Gry, Pickpocketing and the Lucky Cigarette Case.

Succeeding by 5 maxes out every single one of these cards so far (except upgraded Lucky Cigarette Case), so you get the full benefit. The downside is that you forego the benefit the skill icons would have provided. This isn't such a big deal for Vicious Blow or Deduction, but something to consider for Overpower, Manual Dexterity and the like.

In the faction, you have Drawing Thin, a repeatable, stacking source of income with absolutely zero downside to using, that completely breaks the game.

Preston Fairmont and Wendy Adams have the best access to these cards, with Preston benefiting particularly well from the regular use of the cats' elevated stats. Preston is also the only investigator so far to be able to take Miss Doyle and All In + the upgraded Lucky Cigarette Case, guaranteeing a 5 card weakness-free draw, or a 1 in 5+ filtered draw that is (hopefully) also weakness free. (Actually, Lola Hayes can use the LCC too but this is a terrible idea, putting the cats at risk on one turn and the LCC on the other). Wendy, with her 4 and investigator ability, is a lot less impressed by these shenanigans.

In multiplayer of course, one investigator doesn't have to do everything. A player can trigger an automatic success with a cat, and the rest of the team can pile on skills. The skills above, as well as skills that are valued more for their effects than icons (Resourceful, Inspiring Presence, Eureka!, Enraptured etc) are all great candidates. Someone with Crystal Pendulum can also get a free card draw out of it just by being at the same location and predicting which way the fur flies.

As you can see, the cats are very multiplayer friendly and a great combo initiator. They are a very interesting deck choice for Preston as well, giving him a path to oversuccess other than stockpiling money. He still needs to find Miss Doyle first though, so don't neglect card draw.

P.S. There is one event that modifies an existing skill test, as opposed to initiating a new one. Sadly, tossing Zeal isn't considered a projectile attack, so Marksmanship does not work. Maybe one day we'll get a Cat-apult card?