You have 2 additional ally slots, which can only be used to hold Creature assets.

When you play a Creature asset during your turn: Reduce that asset's cost by 1. 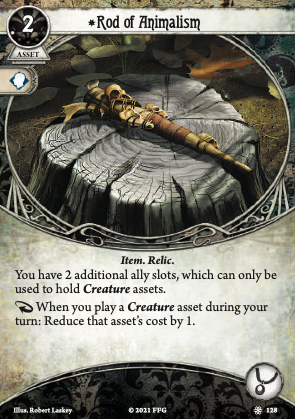 This is to 2x Charisma what On Your Own (3) is to On Your Own (6), though at a 4xp discount. If you have to buy Relic Hunter that makes it even less worth it, since the total xp cost would be 5xp vs 6xp .

The discount on play usually would only breakeven its own play cost, unless you're playing a lot of disposable survivor creatures. Calling in Favors can double-dip on the discount.

You can get this on top of Charisma, though very few decks actually want to be this ally heavy and have all the allies in play simultaneously. Even disposable survivor allies don't stay in play for long

Few Sled Dog decks want to play even more allies due to the action/resource intensive nature of sled dogs, so the extra slot over 1x Charisma may be wasted, and it adds less reliability and more action/card tax in an already strained build.

This decent enabler for thematic decks running Raven, Cat, and/or Dog (Patrice and Yorick comes to mind), although even many such decks would be a lot more reliable with Charisma unless they desperately need the saved XP, or are just running that many allies.

Ok, i saw a lot of people doing this mistake, so: This card is unique, you cant have two of them! Relic hunter won't work, nothing can help you! You can't have 4 dogs in 2 accesory slots. Stop publishing reviews/decks with 2 RoAs. Thanks

Pawiu14 · 55
Unique means you can't have two rods out at the same time, but you certainly can have two in a deck. Also, Rod gives you two extra ally slots for creatures and two dogs take up a single slot, so one rod is enough to have 4 dogs out and you still keep your original ally slot free for a human. — TheNameWasTaken · 3 11/6/21
There are four distinct keyword to limit cards in deck or play: 1) Exceptional cards cost double XP and you can have only one in the deck. 2) "Limit 1 per deck" is the same without the added XP cost. 3) Unique means, that there can never be two copies by name at the same time in play, even among investigators. For example, it is not possible, that one player plays Roland, and another player parallel Roland in the same campaign. Two players might have the same unique ally in the deck, but this is generally not wise, because only one cn play it. You can't even play your second copy to replace the first, because the play action will be aborted in the "Check play restrictions" of Apendix I of the Rules Reference. 4) "Limit 1 per Investigator" cards, like "Dark Horse" or "Lone Wolf" can be twice in any deck, that can take them. And several investigators can play them. They are just restricted, that anybody can have them only once in play. — Susumu · 178 11/7/21
From the RR for Unique: "A card with the (star) symbol before its card title is a unique card. There can be no more than one instance of each unique card, by title, in play at any given time. A player cannot bring into play a unique card if a copy of that card (by title) is already in play. If a unique encounter card that shares a title with a unique player card would enter play, discard the player card simultaneously as the encounter card enters play." "Enter play" and "in play" is independent of how many copies of that card you can have in your deck. You're the one making the mistake here. — toastsushi · 62 11/7/21
I know that you can have 2 RoAs in deck, but you cant have 2 in play. — Pawiu14 · 55 11/7/21
Okay, so why does your review tell people to stop publishing reviews/decks with 2 RoAs? It's still legal to have 1 in play and to commit the other copy to a skill test. — toastsushi · 62 11/7/21
I meant based on 2 RoAs in play — Pawiu14 · 55 11/7/21
There had been one review (of HanoverFist on "Sled Dogs") where this fact was missed, and it's been long corrected. Other than that, I agree with TheNameWasTaken: you likely missed the fact, that "Sled Dog" only takes up half an ally slot, because no other review, I've seen claimed to put two Rods into play. — Susumu · 178 11/7/21
1

We can now convert an arcane slot into a couple of allies to hold our spells. But is this good? I would not say so.

To make the combo reasonable reliable and consistent, you need two copies of the Tarot, and two of Rod, for a total of 8 XP. (And the second Rod will always just be to commit, because it's unique.) Twice Charisma to get both cats into play along another ally cost 2 XP less and save 4 deck slots. It's also much more reliable, thanks to the permanent keyword. It's also a bummer, that the Rod takes an accessory slot, which is quite a competitive slot for , hence make the Hierophant necessary for the extra arcane/ accessory slot.

Or you could just take Relic Hunter, instead of the Tarot. 3 XP, 2 deckslots (and likely 3 resources and a play action) cheaper, more reliable, less flexible in the use of your natural arcane slots, and definitely less fun. But probably still not that great? As a 4 XP permanent, like Miskatonic Archaeology Funding, the Rod would sure be a fun option for Familiar Spirit, which could work in some decks.