"And his eyes have all the seeming
of a demon's that is dreaming..."
- Edgar Allan Poe, "The Raven"
Stanislav Dikolenko
Stella Clark #9. 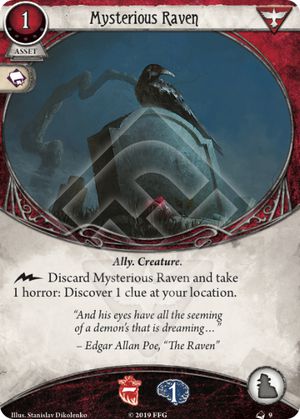 This is a very situational card. Usually, it's a testless clue that costs you a horror, an action, and a resource. Which isn't all that efficient a way to gain clues, unless you have some way to lessen the costs. However, if you have some way to make the costs less severe, it's a useful card for any investigator who doesn't have great investigating skills. The best use of it I've seen was a Yorick deck where he had ways of dealing with horror (Meat Cleaver and Cherished Keepsakes being the primary ones), and with his ability, he could put the raven into play without taking an action.

Compare to Art Student: the Raven costs 1 less, but also costs a Horror to use, and the Student can soak a Damage and 2 Horror after finding a clue instead of 1 Horror instead of a clue.

Compare to Stray Cat: same cost, soaks 1 Damage instead of its Evade, but the Raven costs a Horror, too.

I'm not sure who likes this card. Agnes Baker can maximize it, but she has way better Allies to play....

LivefromBenefitSt · 887
Compared also to Art Student: you can prepay the action early as opposed to the Art Student who needs you to have the action available when you want the clue. Also, Mysterious Raven seems solid alongside The Boyfriendin a Yorick deck where you can recur the Raven and mostly ignore the horror. — Death by Chocolate · 1131 9/1/20
Yup, it being Survivor matters a lot more than you’d think. Resourceful or Scrounge can recur it, as can Yorick’s ability. Solo Yorick with a Keepsake can use this as an easy method of clue getting. — StyxTBeuford · 12699 9/1/20
Add Peter Sylvestre with Charisma to ignore the horror? — Django · 4140 9/1/20
Sure, both your comments are true, but since the Raven takes an ally slot, you'll be spending XP on Charisma. The Horro cost means your going through soak faster if you're relying on Yorick's recursion to get back both Keepsake and Raven, so that's, what, 3 actions, 2 Resources, and a kill for two clues, and the next two cost clues another 3 actions, 2 Resources, and 2 kills. Meanwhile, Yorick could pack Evidence! or Scene of the Crime for 4+ Shroud locations and Old Keyring or Flashlight give him a decent chance at 1-3 Shroud clues. There's also "Look What I Found!" as a back up, plus some of the Nathaniel Cho clue cards. Heck, Yorick can take Grete Wagner as an Ally, get three clues, a useful boost, and some Sanity soak for not much more than the cost of 3 Ravens. So, even in Solo, Yorick has better options. — LivefromBenefitSt · 887 9/1/20
Scene of the Crime costs an action, and both it and LWIF cost 2 resources each. Raven is arguably more efficient in solo when you can't get two clues from most locations. You spend a total of 2 actions and 2 resources for 2 clues (you were going to play keepsake anyway, let's be honest), versus with SOTC it'll usually be 2 actions and 4 resources for the same number of clues since 2 clue locations in solo are rare. There's also no reason he can't include all of those in solo- clue getting options and the ability to fight well is enough to clear most scenarios. I'd also add that testless clue getting like Raven is super valuable in TCU. Finally, I don't see why you need Charisma for this. Yorick is fine letting his allies die and replaying them when necessary. If I want more damage, I'll recur Guard Dog. If I want more clues, I can recur Raven. And honestly, you were likely to buy Charisma with Yorick anyway, so that's not really a valid cost. — StyxTBeuford · 12699 9/1/20
Eh, you may be right. I don't think it's reasonable to ignore a necessary card because you were likely to use it anyway; you still need it for the set up, and if the Keepsake is taking Horror from clue-getting, it's not helping with Horror for the scenario. Charisma is necessary for the Raven/Peter suggestion from DeathbyCocolate (unless I misunderstood the reference) and Django. Anyway, you've convinced me that Raven may have a home in some decks and playstyles. — LivefromBenefitSt · 887 9/1/20
It's definitely not necessary though- it doesn't matter if the first horror or two is on you, then the Keepsake, or vice versa- as long as you aren't taking more horror than you can afford you're fine. Keepsake works pretty much regardless of when you play it, because you either tank 2 horror now, or tank it later, and Yorick is flush with card draw to guarantee he sees it eventually. — StyxTBeuford · 12699 9/1/20
The 2 cards not mentioned so far in this thread are Calvin Wright, and A Chance Encounter. Early in a Campaign it seems like Calvin would welcome Edgar Allen here showing up from time to time to depress him. — HanoverFist · 508 9/13/20
Any solo Survivor with low Intellect (most of them...) wants it desperately. It made solo Survivor just so much easier! It has amazing synergy with Peter Sylvestre, you can obviously recur the raven with Resourceful, Scrounge for Supplies etc. Yeah, you need Charisma for that kind of shenanigans, but it makes life of a solo Survivor a lot easier. — rednar · 22 10/8/20
Agnes may dig it! — MrGoldbee · 1233 10/9/20