Your investigator gains: "Deckbuilding Restrictions: No assets that take up an ally slot."

When you play a event, exhaust On Your Own: Reduce that event's cost by 2. 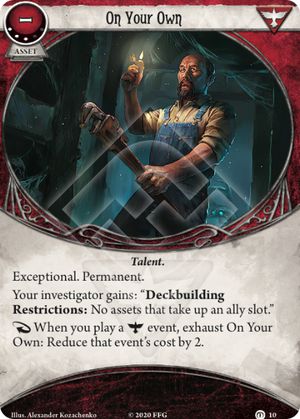 This upgrade definitely thematically and mechanically sets in stone what style of deck you're going to play, but I don't think I quite realized just how powerful this card is over it's predecessor until recently. The lvl 3 version forces you to discard if you end up with an ally under your control, while this version technically allows you to have allies under your control if they are cheated in with tech like A Chance Encounter and Flare. Allies are often some of the best cards in the game so it's worth considering. The only problem of course is this'll only work in multiplayer.

As an aside, any word on whether or not story allies can be taken? I think it's clear they can be put under your control during a scenario, but the modified deck-building restrictions seem to indicate that you cannot include story allies from scenario to scenario because they are usually described as "does not count towards that investigator's deck size" as is the case with Lita in Night of the Zealot. The key phrasing is "deck size" as opposed to "deck parameters" or something similar.

LaRoix · 1572
They're assets that take up an ally slot; you can't have them. Not counting toward your deck size is different from not counting as in your deck. My question about this is, can I take the first one for 3xp, then upgrade to this for an additional 3xp? The level is the same, but the cost is different, so I'm not sure. — SGPrometheus · 635 8/13/20
Both cost 3 XP so I'd say it's not an upgrade. For upgrades, the new card must cost at least 1 XP more, see Rules under "Experience" — Django · 4108 8/13/20
No, this one is exceptional so it costs 6. — StyxTBeuford · 12690 8/13/20
I didn't read the rules about exceptional and thought uprades cared about base costs but you're right. So can upgrade 3xp "on your own" to 6 xp "on your own". But you can't if you have 2x 3xp "on your own" in your deck because the exceptionel keyword prohibits this (by title). — Django · 4108 8/13/20
I think the permenant really should have said 'if you don't control an asset that takes up an ally slot' as part of the reaction trigger. Flare, Chance Encounter, Teamwork, and "You Owe Me One" are already in the pool, and this seems weirdly strong. I would absolutely run a Charisma On Your Own deck to Chance encounter a couple Summoned Hounds that I already wanted to cheat out of a friend's deck that way. — Death by Chocolate · 1105 8/13/20
@Death by Chocolate I think it's neat to play it that way; it's a reward for getting around the rules. The really funny thing is that it helps you play chance encounter and flare, calling for help by being alone. Also, those situations require other players, which wouldn't be around in a true (extremely) solo run. — SGPrometheus · 635 8/13/20
Upgrades care about card levels, not about XP costs - and since exceptional doesn't modify levels you can't upgrade the basic OYO to the exceptional one. — TheNameWasTaken · 3 8/14/20
Wrong. The rules reference explicitly states you take the difference in experience costs, not level. — StyxTBeuford · 12690 8/14/20
Quoting from the rules: "When purchasing a higher level version of a card with the same title, the investigator may choose to "upgrade" that card by paying only the difference in experience...". Yes, when you upgrade you pay the difference in XP cost, not level. But you have to have a higher level card for it to count as upgrading at all - and if you don't, you can't use the upgrade rules. — TheNameWasTaken · 3 8/15/20
Well, for what it’s worth, the original OYO is terrible and you’d probably want two copies anyway, so instead of spending 6 XP there, spend it here. — StyxTBeuford · 12690 8/15/20
my copy of RTFA only had one copy of this card. Was that as intended? — lockque · 1 8/18/20
@lockque seems like FFG decided to go with one copy for an exceptional card. Not cool from them imo. — alexalansmith14 · 595 8/19/20
Since Before the Black throne if you can have only one copy of the card in your deck, you only get one copy of the card in the pack. That's why I have bought a 2nd copy of Before the Black throne: I sometimes play 3-handed solo and put 1 copy of Occult lexicon / Sacred miror in each deck that can have it. — AlexP · 196 8/23/20
How does this work with allies from the campaign that get added to your deck via the story like Lita Chantler, Professor Warren Rice, Henry Armatage, Francis Morgan, etc — Calprinicus · 3519 10/8/20
@Calprinicus From what I remember, in practically every chance that story assets are added to your deck, there is always a keyword of *may* attached to it. Since they do not count towards deck size but you can assume follow every other rule involved with deckbuilding (which is why all story assets are neutral so that they can be added to all decks), I'd imagine that you simply cannot add them to your deck if running On Your Own. If you pick up On Your Own later into a campaign run that has you running allies, then you need to replace them all. Since these are story assets, the game progresses as if they are no longer present in any investigator's deck similar to how it would if you chose not to take them in the first place. — Valokiloren · 16 11/19/20
I'm not sure to really understand the restriction. "No asset that take up ally slot", so what about, those place by the scenario in the player area, like Mr Peabody or Daniel Chesterfield ? — RegisF · 44 4/27/22
They go under your control but not IN the deck, it dosent interfere in the deckbuilding restrictions — AngryJambon · 1 4/29/22