Fight. You get +1 for this attack. If you succeed, you may fight that enemy again. You get +2 and deal +1 damage for that attack. 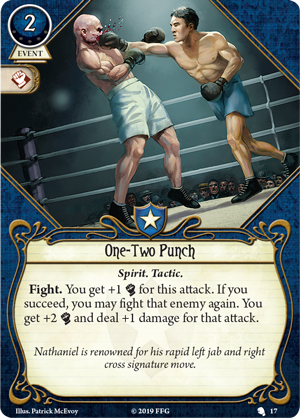 “Explain it to me again.” Akachi was preparing another Shrivelling blast against an archer, trying to duck and weave while still pushing Randall's wheelchair through the underbrush.

“Because it looks like your brother is only using the knife on defense. That seems ineffective. And the bandolier...it seems complicated.”

“I thought you were all about spirits.”

The shaman sighed, as nearby the boxer defeated a warrior with a patented combination, readying for another.

There are a few interesting things going for this card.

I'll start with the obvious - First, this is a card that effectively condenses 3 damage worth of attacks into a single action. If you're fighting an enemy with low fight but 3 toughness, this is going to help you clear it out in a single action. Obviously, this works best on Nathaniel Cho, who can turn it into a solid 4 damage without any external support. However, 3 damage is still good enough to handle a wide variety of normally irritating creatures.

Second, the effect is an isolated card that gives you a +1 for the first attack, and a +2 for the second. This isn't as large of a boost as something like Spectral Razor or Act of Desperation can give, but most Guardians have respectable to begin with - the +1 is enough for most easier fights, and the +2 can help make up the difference. In general, this will be as reliable as any 0 XP weapon.

Third, this is a Spirit card. The primary benefit means that it's something that you can find via Boxing Gloves, but it also means you'll be able to grab it with Calvin Wright, should you find you want more damage more than you need pure stats.

Finally, it is a Tactic card. The biggest benefit of that means it is available via Stick to the Plan, providing most Guardians with a low-price option if their weapons are not available.

It does have a couple of notable downsides. First, the attacks are broken into two separate fights. This means that you will need two draws from the bag to make that three damage land. You will only boost one part of things with commits or any other effects that boost the next skill check, and this means an additional chance to hit or some other negative token effect. Missing the first check is just as bad as missing any other combat event, though you can still get enough damage if you miss the second. If you were playing it specifically to deal with a 3-HP target, it does mean you can at least make a follow-up attack with a weapon.

Second, it's also a 2-Cost Event. Many Guardians have fairly limited income, and many guardians may prefer to spend their resources on a repeated-use weapon, rather than a one-shot event. Its price might be higher than some like.

Is this going to fit into most Guardian decks? While it's not a bad option on the whole, I suspect it's a little niche to be a top option for most. However, if you're using Boxing Gloves, if your hand slots are otherwise precious, or if you simply have the resources to warrant a bit more to deal 3 damage now and then, it's not a bad pick.

I note that this card does not use the word "Fast" nor use the Fast/Reaction symbols regarding the 2nd fight action. This suggests that this event generates a full 2nd Fight action. Therefore, a couple questions:

Asking for a friend.

HanoverFist · 523
Nope. The literal presence of "Fast" or one of the two non-action triggered ability symbols isn't the reason events and abilities that invoke an action designator without actually costing an action don't count as an action, it's the fact that they didn't cost an action. When you play One-Two Punch, you're doing a single Fight/Play action that just happens to repeat the steps of fighting an enemy twice (conditional on succeeding the first time and choosing to repeat it, of course). — Thatwasademo · 43 1/12/21
Though, a strict reading of Nested Skill Tests (FAQ 1.17) would suggest that the second fight isn't part of the same action "If the first skill test was part of an action, the second skill test does not initiate until that action has finished resolving." (note that "if you succeed" suggests that One-Two Punch tries to start the second fight during ST.7) so you kind of get the worst of both worlds here -- the second fight isn't, say, "an additional action which can only be used to Fight" and so doesn't count towards Haste or Pay Day, but it also isn't part of the same action and so doesn't count toward Ace of Rods. — Thatwasademo · 43 1/12/21
Excellent breakdown, thank you. — HanoverFist · 523 1/13/21
There is no nested skill test here, so that rule doesn't apply; the first fight test fully resolves before the second fight test begins. Both are part of the same action, and Ace of Rods applies to both tests. — Hylianpuffball · 20 1/13/21
What makes you say that there is no nested skill test? "If you succeed" is the wording used to add extra results to a skill test, and those results resolve during ST.7, which would make it a nested test and make those rules applicable. I think it's unlikely that the second fight was intended to be resolved *after* the action, not during it, but that is what a strict reading of the text and rules gives you. — TheNameWasTaken · 3 1/13/21
It's all in one action, but the second test happens after the first one resolves. Both tests are in the same single action, but they occur in sequence. This card applies only once for Haste. — StyxTBeuford · 12720 1/13/21
Fighting, Playing (a card), Investigating, Evading and so on are not inherently actions. They are only actions if you need to spend an action to perform them. For example if you Fight an enemy using the reaction ability of Survival Knife, you are not peforming a Fight action you are just fighting. So there is no doubt that that One-two punch only allows you to fight again, it does not grant you any extra action. The only time when an effect grants you an extra action is if the text says "take a [...] action". For example Ursula's ability. — Killbray · 4184 3/19/21
I have a related question for this card. Would it count as two times doing damage to Primordial Evil in the Edge of the Earth campaign ? I guess it does but would like to be sure. — Putzibram · 2 7/26/22