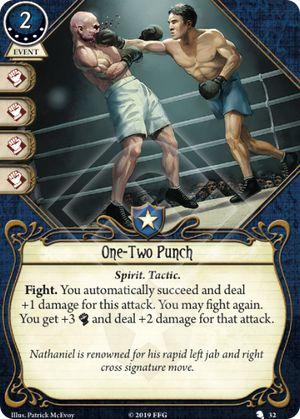 Fun (sort-of) interaction with Lita: you get another bonus 2 damage across this card. If you're running through core you can take this after the XP-heavy second scenario The Midnight Masks and then go into The Devourer Below with murder on the mind. If you land the second attack ("No please!") you deal a whopping 7 damage.

If you're playing solo, this card will let you take out the big bad in two actions — one playing this, second with an attack from any standard weapon that deals +1 damage.

But if we're doing that, why don't we go further? Take Vicious Blow x2 (only one actually has to be levelled) and chuck'em in as well. Blam, blam! You just biffed the big bad beastie back below. In one action! It's about sending a message.

Now, the first of these 'combos' is easier to pull off; you're just looking for Lita (which you're doing anyway — she's incredible). But if you do happen to draw your Vicious Blows in time... well, surely one-two punching an Elder One back to beyond as soon as it raises its head is as cool as it's going to get?

Proxyone · 1
I think that double or nothing can only affect portions of it that are skill checks where you can commit cards. So the first punch would happen once, and you would double the second attack. — itachi18 · 1 6/4/20
On the non-upgraded version, being allowed to make a second attack is something you get for the test, so there it would seem that you get two additional attacks (with just the regular one-two punch damage bonus), in addition to dealing twice the damage with your first attack. The extra attacks would not have any increased difficulty, as Double or Nothing only affects a single test. However, on this upgraded card, the second attack is something that is not dependent on the result of the first test, and so Double or Nothing does not give you two follow-up attacks. — kalmakka · 1 6/14/20
I'd say yes to 2x additional attacks from looking at the FAQ on Double or Nothing:Q: Does Double or Nothing work with extra action effects like Quick Thinking or the level 2 .41 Derringer? A: Double or Nothing works with both of those effects! Those effects indeed trigger during step 7 [of a skill test], and then create a delayed effect which grants the extra action(s) after the test resolves. — Atrael · 1 8/22/20
@itachi if a test is automatically successful, you still resolve every other step of the skill test - including the ability to commit skill cards. @Atrael It does not work for the reasons that kalmakka discribes. The second fight just happens for the level 5 One-Two Punch. It isn't relevent conditional on 'if you succeed'. However, the level 0 version IS conditional on 'if you succeed' and thus could be combo'd with Double or Nothing. — Death by Chocolate · 402 8/29/20