Fast. Play when you are dealt damage and/or horror.

Cancel up to 2 damage and/or horror just dealt to you. Then, gain that many resources.

Tiziano Baracchi
Before the Black Throne #315. 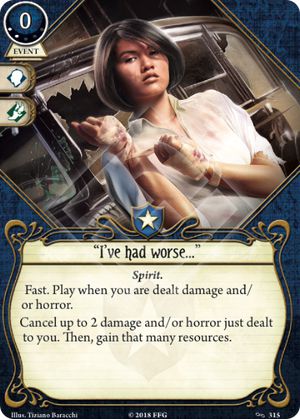 Superb card. Often enough you'dd play the 4-xp version to negate 2 horror and this version here does just that, for less XP! I wouldn't be hesitant to claim "I've had worse…" the better card of the two.

"I've had worse…" negates 2 points of pain and rewards you 2 resources for it, each of these effects is'nt by any means a powerful effect on its own, but the two combined effects are greater than the sum of their part. Cards are a precious resource and when cards arise that double dip roles those cards warrant special attention. Taking damage is a bit of an art-form, and characters gotta be good at it, this requires some soaks and weapons to mitigate and prevent incoming pain, "I've had worse…" does the former and helps you pay for the latter.

Most characters already give consideration to "I've had worse…", the 2xp variant is going to be hard not to justify.

Off class characters should also take note, Diana Stanley in particular loves the cancel trigger. "Skids" O'Toole has problems and "I've had worse…" can be a hugely helpful influx of cash and survivability for him. William Yorick does not care, at all. Joe Diamond likes it so/so, he has higher priorities but "I've had worse…" is not a terrible way for him to conserve deckspace.

"I've had worse…" is one of those rare cards that are near universally good, only niche characters who have overabundant survivability won't consider it.

Just a great addition to the card pool. Guardians that were previously interested in "I've had worse…" now have a stepping stone, and Diana Stanley can also take this.

For most of our Guardians, this card can serve as protection against horror and economy, two things they really need. For Mark Harrigan, he might be interested in avoiding damage sometimes, just to make sure he doesn't flip Sophie.

For off-class Guardians, I've already mentioned Diana, who can use this as a canceling effect. Otherwise, "Skids" O'Toole, William Yorick and Joe Diamond can all take this. I don't think any of them combo particularly hard with this card, but I think all of them could take it and have some us for it.

Finally, as this is Spirit traited, Calvin Wright can take this... and that's amazing. From what I've seen, Calvin is all about riding the edge, pushing your damage and horror up high without dying. This lets you avoid two points of damage or horror, letting you stay alive for just a bit longer.