Fast. Play only during your turn. Attach to an investigator at your location, under his or her control.

Forced - When the mythos phase ends: You must either spend 2 resources or discard Delay the Inevitable. 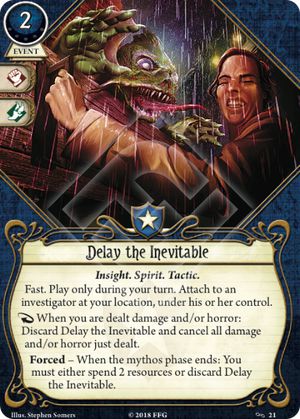 Delay the Inevitable is generally not very good in ordinary . The most reliable way to trigger the card is through an enemy attack, which Dodge does a better job. Sure it can cancel damage/horror from encounter cards, but there is no guarantee that you will draw those treacheries. The 2 resources upfront + 2 resources upkeep cost could also be painful. It has some use to protect a near-defeat teammate (literally delaying his/her inevitable death :D), but that is not a scenario that comes off too often in my experience.

That said, the card is oddly useful in the 3 Circle Undone investigators that can use it, in interestingly different ways.

Carolyn Fern has better econ to use the card, and has less chance to need to fight an enemy so Dodge is not as useful. Also, if you use her replacement cards, Delay the Inevitable can help to cancel the direct horror from To Fight the Black Wind, thus prevent the doom to be placed on the agenda.

Joe Diamond like the card in his Hunch deck. It is a 2-cost fast Insight, which is just perfect for the Hunch deck. It becomes essentially free (outside of opportunity cost), that you can play it with ease, and not be too afraid if it whiffs.

Diana Stanley may want the card as an additional cancel to fuel her ability. Part of the card's cost is mitigated through her ability. Note that Diana's ability only activates when the card actually cancels something, so the partial cost reimbursement is delayed. It usually is a downside, but it may be useful to trigger Diana's ability out of phase. Certainly worse than Deny Existence though, but Diana may nonetheless want both.

Fun fact: Delay the Inevitable (along with Deny Existence mentioned above) can cancel Beyond the Veil. Maybe not so funny to Yog-Sothoth though.

ak45 · 415
I feel like the cost is just outright too debilitating, especially if the card sticks in play for a round. — Tsuruki23 · 2350 2/2/19
It's also fun with the upgraded Dynamite Blast. — jmmeye3 · 595 2/2/19
Delay the Inevitable does have some advantages over Dodge. It can prevent you from damaging one of your Allies with a weapon attack, or save you from inflicting Horror on yourself with a card like Shriveling. — Katsue · 9 2/2/19
The fast keyword also allows you to play this card shortly before it's trigger comes up during your own turn. — Django · 4434 2/8/19
The card says to place this under the other investigator's control. Does that mean they pay the upkeep? — jemwong · 90 2/15/19
Seems like it could have some useful synergy with Forbidden Knowledge in a Diana Stanley Deck. Play this. Take a secret from Forbidden Knowledge. The horror from Forbidden Knowledge gets soaked by Delay, and Diana's ability gives a resource and a card draw. And Delay becomes accessible again as soon as Diana gets he Twilight Dagger out. — brssnyde · 1 2/18/19
(@jemwong) Yup, the "you" in the "Forced" section of the card will refer to the card's controller at that time, as per the section clarifying "you/your" in the FAQ. "Any other instance of “you/your” that does not fall into the above categories refers to the investigator who controls the card". I'd likewise prefer clearer wording, but the English language has its limitations. — Yellow_Peril · 1 5/11/19
Another fun fact for playing this with Diana, If you have the twilight blade out you can play this forever as long as you have the money ^_^ — NarkasisBroon · 10 11/27/19
Quick question, if I may: this card says you can attach it to any investigator at your location. If I do so, who pays for the upkeep? I assume the investigator with whom it's attached? Also, I assume it will still activate Diana's ability once it cancels the damage, even though it's not in control of Diana at the time? — Deadlykipper · 1 2/9/20
Yes, it's the controller of the card who pays the upkeep. (See Yellow_Peril's comment above; "you/your" refers to the investigator who controls the card in this situation.) This can indeed still activate Diana's ability, because Diana's ability cares about whether Diana *owns* the card that is cancelling/ignoring an effect, and not whether Diana is controlling that card. — iceysnowman · 159 2/14/20
I've been playing DtI with Diana in TCU with some success. I just managed the following: DtI under Diana, use Twilight Blade to cast it. Then play Rite of Seeking and Use the Black Book to pay with horror. Two copies of Death Approaches in my threat area so take 8 horror, all absorbed by DtI which then goes back under Diana to give me a card and a resource, plus both Treacheries discard. Quite an unlikely combo to set up but satisfying when you do! — jimrexdhc · 1 10/4/20
Does it work that for example you can play it right after you draw the symbol token on shriveling and have DtI cancel the horror? — jonklin · 512 1/23/21
unrelated but .... is that stella on the card art?? — Antiundead · 21 6/24/21
@jonklin There is no player window in a skill test after revealing a token, so at that point it is too late to play Delay the Inevitable. — Signum · 14 6/17/22