Spend 1 resource: Choose an Item asset from your hand and play it (paying its cost).

"Murph, you know full well that The Rat would snitch on anyone, at any time, for anything, truth be damned if the price was right."
-Jason Marker, Investigators of Arkham Horror
Tiziano Baracchi
Where Doom Awaits #265. 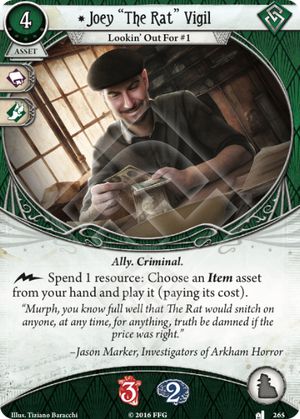 Over-costed as HECK. holy moly. Joey "The Rat" Vigil costs 4 resources to play and a resource to use! If you want to save some item-playing actions just go and get Leo De Luca, by the time the former has saved you 2 actions he actually has cost you the same amount as just playing a Leo De Luca who generates flexible and omni-usable actions in spades.

Yes. If you want to nit pick. Joey "The Rat" Vigil does his thing in a window, meaning that you can replace an empty gun or the like mid-combat, this niche is nowhere NEAR good enough to match the omni-usefulness of Leo.

Tsuruki23 · 2348
I agree that Joey's too expansive. But for Preston he's pretty fun, especially with all the cheap survivor soaks. — Django · 4420 10/27/19
Yeah, the Leo comparison is pretty sad here. Even if you activate Joey's ability every single turn without fail, I think Leo's passive +1 action is still far superior. And, of course, you won't realistically be able to achieve anything close to that with Joey. — CaiusDrewart · 2815 10/30/19
7

This card is certainly better than suggested by the other review, and far from "the worst card in the game" as suggested in the review for the upgraded version. I challenge you to actually use this in an appropriate deck (such as Tony Morgan or Jenny Barnes) and not see his value. I did and I would choose him again. The point is not only extra actions, but also optimizing when you play each item, so that you can maximize the skill value, clues, and damage from your weapons and tools to match what you are facing. He also makes Colt Vest Pocket and Lupara decent weapons, especially with Tony Morgan. Yes, he is expensive, so don't use him with "Skids" O'Toole or other investigators that tend to be short on resources. But in the right deck, the effect is worth the cost. Also, the theme fits perfectly: he is the guy that can get you whatever you need, right when you need it, with no limits, as long as you can pay the price.

jmmeye3 · 594
If you are just looking at CVP and Lupara, you’re probably better off with Fence. It is 1 xp, but it saves you a resource when you play it and every time you use it, and it doesn’t take the ally slot. It doesn’t work for Tony’s signature guns, but other than those how often are you using it for a non-illicit item? And how often is it relevant that it can be used outside of your turn? Fence also has synergy with a few illicit events as well. I’m not suggesting Joey doesn’t provide value (and thick stats for an ally), but the level 0 seems outclassed by Fence for most actual use cases. — Death by Chocolate · 1256 6/19/20
I would definitely agree that he is not the worst 0xp Rogue ally, as Rogues also have Henry Wan. — Zinjanthropus · 212 6/20/20
Joey is nuts for Preston, if you built around him and replace him with Leo later — Django · 4420 6/21/20
You're using CVP and Lupara as examples for action conservation, but you could also just use Sleight of Hand and get WAAAAY more value than just an extra action. — TheDoc37 · 462 10/10/20
1

For my personal experience with Joey. I've got scenario with 10++ resources, Jenny's Twin .45s and couple items on hand, Leo died. Is this finally the time for him to shine?? nop. I choose to keep Hired Muscle just for put guns in normally not even use all moneys. Yet again, Joey still on bench.

I know he is bad but still got some hope in him. Hard to win in action efficiency wise compare to Leo. Maybe I really need to focus on what he has in different.

-- it's | not mainly for action efficiency but for precaution. You don't have to equip weapon until enemy spawn. quickly put up Elder Sign Amulet when you got sanity treasury test? sound like cool moves which rarely happens.

-- how this ability has no limit per turn |For Leo, you got 1 action per turn but Joey you got infinite action for item until you broke. So maybe he might shine on some build. High resource might not be enough but might need big hand aswell. and burst playing item asset like some ultimate (for what tho. Only thing I can imagine that there are some location that give discount to item)

Pawley · 18
Ya Joey (lv. 0) is basically not much more than an expansive damage soak. Jenny can take Down to the Rabbit Hole, and then use Adaptable (for 2xp) to swap in Joey (lv. 0) (and bunch other cards of course) and then upgraded Joey (lv. 0) to the much better (lv. 3) version. — liwl0115 · 36 5/31/22
A really heavy item build in Preston is about the only place I see Joey Shinning, he's just too expensive for anyone else really. — Zerogrim · 262 6/1/22
Joey's main complement, basic or upgraded, is in the overlap of Survivor and Rogue. Soaks are excellent targets for Fast-ification, as are fragile or low-ammo weapons that you want to use efficiently. — Maseiken · 1 6/1/22