After you defeat an enemy, exhaust Grete Wagner and deal 1 damage to her: Discover 1 clue at your location.

"With Iron and Salt. With Water and Fire."
Ilich Henriquez
Nathaniel Cho #7. 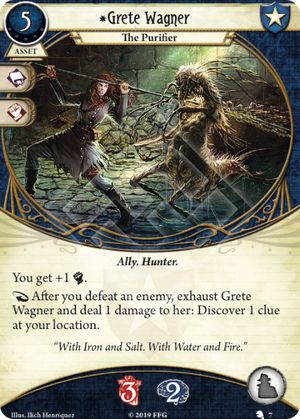 Grete Wagner is super expensive, so not an autotake by any means, but the ability to turn killed enemies into clues is brilliant, if you have a powerful cash engine (such as by adding Stand Together and Clean Them Out) then you can run Grete plus a good weapon and not be completely broke, at which point you should be able to munch through enemies and rack up clues with her.

It's a brilliant Roland Banks card, it directly synergizes with his shtick. It's a great Mark Harrigan card, as the damage she takes is a card for Mark, All the characters really can use her, but I would like to say that she stands out perhaps exceptionally in a deck that has powerful economy to start with (Zoey, Leo, Tommy, where there is enough resources rolling around to pay for both her and the weapon of choice as fast as possible, Grete is useless if you cannot win fights!

Grete Wagner upgraded is also very good, especially for a Roland where the + is useful and the ranged-cluegetting synergizes with his base ability to become hyper-efficient at turning beaten enemies into clues.

Be aware that, like Roland Banks, the ability specifies that -you- must defeat the enemy to net the benefits.

Grete Wagner is good, but be careful about your resource economy.

Tsuruki23 · 2150
I think she's really great IN a Roland deck, as a replacement/supplement for Beat Cop; having better odds of reaching that lofty 5 Combat is great for Roland, and she only costs 1 more resource. I also really like doubling up his ability: if there's one clue on the location I'll use his ability and preserve Grete's health; If there are two I can snag them both; if there's one clue (and one enemy) on two locations I can kill the enemy, scoop the clue, kill the other enemy and scoop another clue. Efficient! — SGPrometheus · 604 8/29/20
Also worth noting that the 3XP upgrade to her gives you +1 intellect as well (marginally useful), but most importantly the ability to scoop a clue up off of a connecting location. Enemies don't always play ball with their locations, nor do shroud values. — BlankedyBlank · 13 9/7/20
Effective in Mark Harrigan to trigger card draw and Mark needs — Hulahoop12 · 1 10/1/20
It is interesting card to use for Mark to trigger up to 3 additional card draw and good alternative in solo Mark for clues (though there are less enemies). She can be used in an ideal deck/scenario, (mythos phase -> beat cop and soften enemy, investigate phase-> Grete Wagner and finish off enemy, Enemy phase-> Engage another enemy before that and take dmg, upkeep phase -> solemn vow ), Mark can draw up to 5 cards a turn! (and no need to discard end of turn) The upgrade though may not be so necessary for him (he doesn't really benefit +1 intellect, and he can reposition with shortcut). — Hulahoop12 · 1 10/1/20
1

So, this is half a review half a question.

First the review, you are paying 1 resource more than beat cop (and having a unique ally which matters sometimes) to trade "deal 1 damage" for "gain 3 clues" (or gain 2 clues and keep the fight bonus), beat cop is good because untested damage is good, but is 1 untested damage worth 1 clue?, is it worth 2/3 clues?, probably not. Her expense is not something you can ignore, but she got introduced with a ton of guardian economy cards and just before guardians got the most balanced economy card at level 0. (rite of hot streak)

Zerogrim · 232
Yes, because you are still in the same timing window of "After you defeat an enemy". It's a potent combo, especially now that Yorick can actually afford to play Grete multiple times with Rite of Sanctification, and is every bit as strong in play as it sounds on paper. — suika · 8292 3/27/21
as a yorick fan what I am about to say hurts me but I think yorick is getting a little "too" nuts, its not long till he unlocks never failing on tests ever ontop of infinite money and testless clues. — Zerogrim · 232 3/27/21