When you become the bearer of this weakness, gain 2 experience.

Revelation - Lose 5 resources. If you cannot, instead remove Offer You Cannot Refuse from your deck, search the collection for Fine Print, and place it in your discard pile. 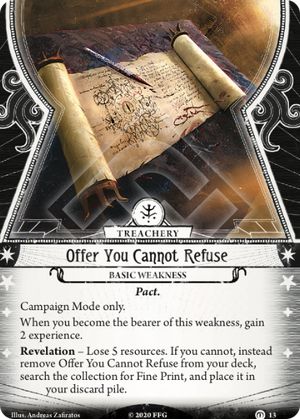 While this weakness may seem relatively benign, as others have mentioned - 2xp and 0 resources at the start - my recent playthrough as a clue-ver Mystic was completely derailed by this card. It's minimizing to say that you just start with 0 resources - if that was how this card worked it would be a non-issue. The issue is that you can never drop below the required resources if there is a card draw coming. In the second scenario, I once (once!) dropped below 5 resources (to 4) and this was the very next card I drew. Upkeep is "draw a card, gain a resource", so you can't count on the upkeep resource to help. You have to guard against treacheries that lose resources, locations that need resources, etc. Once the second version is in your deck, it's even worse as you don't have enough resources in turn one to avoid an unlucky first upkeep (or to play any "draw" events/items), without a hard mulligan for resource generators. God forbid you get the third one.

As a Mystic, I could not get my set up in place for at least 3 rounds due to needing to hoard resources and play resource generators rather than assets, which essentially locked my player down. All of my early xp had to go to fast (and free!) resource generation instead of upgrading spells, which dramatically changed my build.

As weaknesses go, I feel this is one of the harder hitting, mainly because it requires you to both change your playstyle and change your deck to manage it. Most basic weaknesses slow you down, but few actually require you to build around them like this one does. Best recommendation to manage this one is to get the resources in hand, then lean into card draw effects until it's gone. And if you are a high cost build (like most Mystics), good luck to you.

Time4Tiddy · 213
I'm currently suffering this weakness with Daisy Walker. I'm not sure it's completely derailed me, but it's a harsh weakness, for sure. I've had to adapt my upgrade path completely differently to cope with it. I'm on the second level at the moment! For me it's on the Fun side of Harsh rather than the Unfun side of Harsh :-) — acotgreave · 519 7/18/22
Mystic can use ikiaq to counter this weakness. Note that the upgrades are not basic so she can’t counter them — Django · 4428 7/21/22
2

The safe way to read this is "Gain 2 experience. At the start of each scenario, you have no resources."

You basically never want to have less than 5 resources in your pool unless this weakness is in your discard and you're far away from recycling. Play with that handicap and this weakness is actually fairly benign and can be a boon.

But buyer beware. Each time you fail to have the desired number of resources when your patron comes calling, it gets even harder to meet the offer the next time. You basically get three failures over the life of your investigator, and then your goose is cooked.

A neat thematic weakness. Do take note: you cannot choose to put this weakness in your deck, but since Arkham is heavily open to table rules I imagine some folks will still sneak it in.

drjones87 · 106
No group I have ever played with has chosen their weaknesses. It's a non-factor. — fiatluxia · 52 2/7/22
I started Innsmouth in a 4p group with Bob Jenkins and draw this weakness after creating my deck with "In the thick of it" and "Charon's obol". I had a hard time trying to save my ressources to avoid death because of the weakness of Bob and this one but it was really funny though. I was holding my breath at each upkeep phase! — Tirindor · 7 2/10/22
1

Hello, I just have a couple of basic questions:

--> Does it means here, that if you loose less than 5 ressources the "If you cannot" effect triggers ?

--> Does Deny Existence still triggers the "If you cannot" effect triggers ? (I cannot imagine that it doesn't trigger)

phosgene · 10
So if you have, say, 3 resources, you'll lose all three because of the second bullet you quoted above. At the same time, since you have less than 5 resources, you cannot lose 5, so the second part of the effect triggers. If you play Deny Existence with 3 resources, you won't lose them, but because you still cannot lose 5 resources, the second effect triggers. If you Deny the resource loss with 5 resources, you can lose 5 resources (even though you won't), so the second effect won't trigger. I think. — SGPrometheus · 688 11/6/20
Since OYCR says "if you cannot, instead...", I think if you cannot lose the full 5 resources, you do not lose any and instead resolve the "remove OYCR from your deck..." effect. — ak45 · 415 11/6/20
Agreed; I didn't notice the "instead" there. So Deny Existence at <5 resources is pointless since you resolve the second effect instead of losing resources, but still useful at 5 or more. — SGPrometheus · 688 11/6/20
I dunno if I agree with SGPrometheus on this one. Ignore isn't defined in the rules reference guide. Ignoring that aspect of the effect isn't really well defined but could easily be interpreted to mean that the card reads as "Lose *nothing*. If you cannot..." Or "If you cannot...". Personally, in the absence of a ruling by Matt, I would take the precedent that if you ignore a cost you are still considered to have paid the cost. Therefore I think Deny Existence satisfies the requirement. — NarkasisBroon · 10 11/6/20
Ignoring an aspect of a card's effect doesn't change or remove the card's text; you simply don't resolve that aspect. Since you cannot lose 5 resources when you have 4 or less, the second effect triggers even if you denied the resource loss. — SGPrometheus · 688 11/7/20
Thanks all for your answer haven't thought about the I can lose 5 resources but I deny existence and then everyhting is fine. — phosgene · 10 11/8/20
I'm wondering how you would apply Deny Existence. Deny Existence works against 1) an encounter card, or 2) an enemy attack. Basic weakness is none of both. — chrome · 35 7/12/21
Treachery and Enemy weaknesses are considered to be encounter cards when they are being resolved. It's the same reason you can use Deny Existence on cards like Sister Mary's weakness. @chrome — Jaysaber · 7 9/12/21
0

I have a question about this basic weakness.

Right now the rules say the random basic weaknesses are added at the end of the deckbuilding process. Does that mean that the 2 experience you get from becoming the bearer of this weakness can't be used until the end of the first scenario? With the rules as written, that seems to be the case, but I wonder if that was the intention.

I haven't played with this weakness yet, but it seems debilitating if your name isn't Preston Fairmont. I think most investigators would prefer Paranoia. These campaign weaknesses that evolve to create disastrous consequences just seem mean in general. Having 2 experience here is at least nice little bit of compensation - if you could use the experience before the first scenario, it would seem more like the game was saying "here's a challenging weakness, take some experience to see if you can fight it off." However, since it seems like the experience comes after the first scenario, it feels instead more like the game is saying "this weakness is ultimately going to get you so you might as well live fast, here's some experience to see how far you can level up before you go."

ArkhamInvestigator · 278
I think the rules are worded that way to prevent you from totally restructuring your "all-money Preston" deck after drawing Paranoia. I'd say that the weakness gives you the two xp after deck construction, but before the first scenario, allowing you to upgrade your deck instantly. I really like that this weakness is just Doomed-but-that-was-divisive-so-we-balanced-it. — SGPrometheus · 688 9/1/20
My gut instinct says that there isn't a window to spend XP in before the campaign starts but Mateo contradicts that so I would stay consistent with Mateo and spend the XP before the campaign starts. — TWWaterfalls · 862 9/1/20
You build your deck, THEN get the weakness. The window Mateo uses to build his deck is the same window everyone gets, he just has more XP for it. You get this weakness AFTER that window, so presumably you have to just live with it for one scenario before you even get to use the 2XP. — StyxTBeuford · 12744 9/1/20
I wonder, why there is even a XP Bonus. Yes thematically it's a offer, so there have to be some benefit, but they could also designed it more like arcane research "lv0 survivor permanent, cannot discard by any means, you are gifted with more xp but dont have start resources". The difference were, it would be an active decision, not some random weakness — armin321 · 1 9/8/20