After you resolve an ability on the attached Tome asset, exhaust Abigail Foreman: Resolve its effects again.

Andreia Ugrai
Weaver of the Cosmos #324. 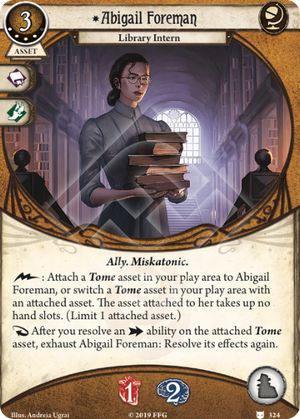 Wow! Daisy Walker is living for the back-to-back releases with the new-Old Book of Lore and now this. Honestly, this card is basically a 4 XP Daisy signature card, better than her current one I might add, since it opens up one of her Daisy's hand slots as well, and won't let The Necronomicon push it out of your hands as easily. Let's take a look at her favorite reads:

I'm realizing this review became less about the card, and more about Daisy and all the individual tome cards, but still. STILL. I can also see Mandy Thompson playing this since it does synergize with her abilities, although she already has easy access to her ability via other options. I don't know if it is necessary to sink the 4 XP for Mandy or the other to play this.

chirubime · 12252
Are we sure that it doesn't work with Pnakotic Manuscripts? Would it just affect the next two instead of just the next? I don't know how it actually works. Would probably need a ruling unless the rules clarifies it. — Urgergaberg · 1 3/13/20
Regarding Pnakotic Manuscripts, i think it works on it's action ability, but only on 2 different investigators cause it refers to the "next action". — Django · 4112 3/13/20
Btw, i missed that Necronomicon isn't in your hands, its in your threat area, so I'm not so sure if Abigail can do this , but otherwise! — chirubime · 12252 3/31/20
4

A few more cycles have been released now, so what other Tomes should Abigail Foreman be holding for you?

That's it so far with the Player Cards as of Edge of the Earth. Let's see what we get next!

At a glance, you'd think Abigail is Daisy Walker's new best friend. Well, you're probably right - she fits in most Daisy decks with little effort, though you may want a Charisma first. However, there should also be some attention on whether or not she can fit into non-Daisy decks, and that's a lot fuzzier.

Abigail has the ability to repeat any Tome for free. This effect will determine whether or not you include Abigail. You can still get an extra hand slot by attaching Tomes without on them, but there's little reason to do so. Ally slots are valuable, and trading an ally slot for a hand slot is likely not worth it. That being said, most characters who aren't Daisy will have a hard time running numerous books and then constantly burning actions to use them. If someone is only running a single book, Research Librarian's consistency and relative cheapness is going to compete for the same slot, and likely be the cheaper and more reliable choice.

One important note is that the Abigail resolves the effect of the , not the full . This means that costs are not part of the effect, so 'free' doesn't only apply to the action, but to any other costs as well. This allows you to squeeze extra uses out of anything that has limited uses. As a result, you will want to keep a careful eye on Tomes with uses, since they become more tempting than before.

For easy reference, as of March 2020, here are the list of Tomes that have corresponding effects:

There are some definite hits in here - an Old Book of Lore drawing two cards every turn or an Encyclopedia giving +4 would be two very common and powerful examples. Scroll of Prophecies can also let you tear through absurd amounts of your deck, and Otherworld Codex can clear an absurd amount of problems or give you two shots at clearing one. If you're using a couple of these effects of these very often, Abigail can give you a lot. However, those are very action and resource intensive combos to pull out for anybody who isn't Daisy.

If you're using at least four copies of Tomes with ... Well, I hope you're playing Daisy. But it's only in those circumstances that I would say the reliability of Abigail is high enough to justify the cost, given many Tomes cost XP to get in the first place. If your build otherwise functions with all of those Tomes, Abigail is worth looking into. Otherwise, it's best not to put too many actions into a combo that might show off a neat trick or two, but won't reliably help you do things that need to be done.

EDIT: Nevermind. The Necronomicon goes in your threat are, not your play area.

In addition to the other good reasons to run her in Daisy Walker, I believe she enables you to get rid of your weakness "for free." You can't choose to discard a weakness from play, but you can choose to attack your Necronomicon to Abigail. And if Abigail were to leave play, then all her attachments would be discarded. So, try running her with Calling In Favors and Art Student, or another cheap Seeker ally. If you don't draw Abigail, you can use Calling In Favors the normal way: Play an art student, return them to your hand, and try to find Abigail. But, if you do draw Abigail, you can hang on to your Favors until you draw the Necronomicon. Attach it to her, bounce her to your hand, try to hit an Art Student for a free clue, then reply her at leisure.

OrionJA · 1
Even if the Necronomicon was in your play area and thus could be attached to Abigail, it cannot leave play while it has any horror on it. Cannot is absolute, so Abigail leaving play wouldn't get rid of the book. — TheNameWasTaken · 3 5/23/20
0

For Daisy Walker, Abigail Foreman is also a powerful combo with Book of Shadows 1. Put 2 charges on a spell (or 2 different ones) for no action and 1 ressource? Even rivals Twila Katherine Price who puts only 1 charge an a spell.

You could Teamwork Abigail Foreman from the team's seeker to the mystic and give her Book of Shadows 3, gaining a 3rd or 5th arcane slot (add 2 Sign Magick). Spend an action each turn to add 1-2 charges to the following spells:

If the team has no access to guardian, Versatile is an option to get Teamwork.

Django · 4112
If Abagail is removed (taking damage etc), is any attached tome removed as well? — Agthor · 1 4/7/20
@Agthor Yes. Attachments are dependent on the thing they're attached to. — SGPrometheus · 633 4/10/20
Is there a faq for her? What happen to the necro if she leaves the table? Can she attach the necro? In German translation is the first sentence in the description: threat area ist part of the play area. That would let her attach the necro. Or is this just a translation mistake? — Mypho · 1 6/7/20
An investigator's threat area is an "in play area" (as opposed to an "out of play area") but it is not the same as, or part of, that investigator's "play area". Assets in an investigator's threat area and in an investigator's play area which occupy slots collectively count against the investigator's slot limits. But the areas are separate, and Abigail specifies "play area" while Necronomicon's Revelation ability places it in the "threat area". She can't attach it while it's there. (If some other effect managed to move it to the play area, she could then attach it to herself. I don't know of any such effect.) — Yenreb · 15 9/8/20