Exhaust Alchemical Transmutation, spend 1 charge: Test (0). For each point you succeed by, gain 1 resource (to a maximum of 4). If a , , , , or symbol is revealed during this test, take 1 damage.

Andreas Zafiratos
Return to the Path to Carcosa #7. 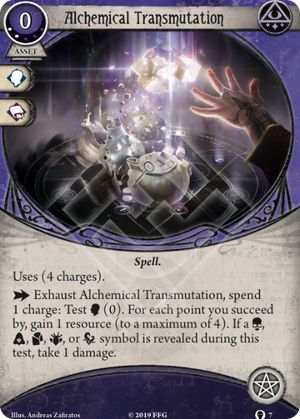 People think that this card is a trap, but I am considering it to use with Akachi (5 charges for 0 resources and one action). Even if you don't have the actions to milk it, it can be converted to resources with spirit speaker or used to pay angered spirits.

DrunkenChen · 36
Use this with Dexter and Rogue skills, as it’s an on demand 0 difficulty test. — StyxTBeuford · 12699 9/15/20
I actually love this card. I use it in a Sefina deck with Watch This and Double or Nothing to generate a heaping pile of resources. The test of 0 is extremely important for getting the absolute most out of it. — LaRoix · 1574 9/15/20
I've done this and it works great. I took versatile to get at double or nothing and save actions, but this is also a good option when you're going to use rite of seeking and don't want to risk ending your turn early. — deathsomething · 8 4/30/21
It occurs to me that as a difficulty 0 test, this can only be failed with the autofail token... no matter what difficulty you're playing on, and no matter how bad of a negative modifier you draw. Are there any combos out there that would profit from a near-unfailable on-demand test? Only thing I can think of is Daring Maneuver to (nearly) guarantee Rogue oversucceed rolls. — HanoverFist · 508 5/24/22
8

This card is considerably better when you're using it in a Sign Magick deck. You don't need to waste actions activating this anymore, just use it in conjunction with a spell you're already using! The same can be said for other under-used spells such as Clarity of Mind etc. That's more of a note about Sign Magick, but it's still worth mentioning!