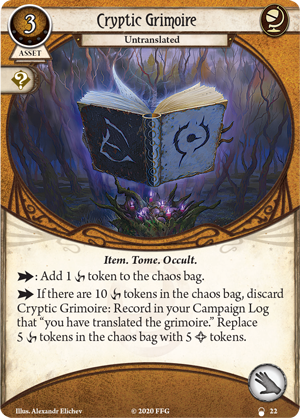 One thing you might not realize from this card: cursed tokens deplete rapidly, and more rapidly when you have more in the bag.

As I’m writing this, this is the most difficult seeker upgrade to get, and we don’t know what it does. To get it, you’re going to need other decks not only having cards add curses to the bag, but almost certainly “tides of fate”. (Or you could play solo, but if you’re playing solo seeker you probably don’t have the extra time and actions to flood the bag.) otherwise, you’re going to be putting tokens into the bag while your teammates remove them, unless they don’t have any skill tests, or encounter cards… Which requires them to build their deck around this room grimoire anyway.

Unlike the seeker cards that require you to pass skill tests, discard cards, or fill your hand, This one negatively affects your teammates in a massive way, and undoes itself.

Hopefully the payoff is worth it! Because when you succeed, you’re still going to have five curses floating around in the bag.

MrGoldbee · 1314
I've played one scenario with the innsmouth set and we got to 10 curses in the bag accidentally using only tempt fate and Amanda with a promise of power. I think if you want to get this it's pretty easier. Easier than the forbidden tome at least. It's rare that a seeker spends 5 actions drawing cards in a scenario. — NarkasisBroon · 10 10/4/20
Awkwardly, until the errata it, this is actually the EASIEST seeker upgrade since you don’t even have to play it. You can just use Knowedge is Power to trigger its second action while bypassing its cost. Plus you get to cycle it. Now, you can pretty easily argue that the 10 Curse tokens in bag isn’t a ‘cost’ it is a ‘condition’, but while the rules establish that there is a distinction, they leave it entirely to common sense discern what is which and never really define ‘conditions’ at all. Too pedantic? Very well. You can still get to 10 curses easily enough through other cards (such as everyone running Tempt Fate etc.) and still use Knowledge is Power when the condition is met and the Grimoire is in hand. It saves you 3 resources, 2 actions, 1 Card, and your hand slot. — Death by Chocolate · 1256 10/5/20
I don't think that is right, DbC. For something to be a cost, there has to be a potential change in the board state, which leaves out "if the bag has..." as a cost. It might cancel the swapping out 5 Curse tokens for 5 Bless tokens, which is a bit more like a cost. If it said "Add 10 Curse tokens to the bag..." I think you'd be onto something. — LivefromBenefitSt · 937 10/5/20
@LivefromBenefitSt See, you SAY that, but if you check the Rules, you will not actually find that in the explanation of costs. It never actually states that 'for something to be a cost, there has to be a potential change in the board state'. I DO agree with you, that 'an actual change in board state' is what should probably be the difference between a cost and a condition, but that isn't actually supported by RAW. :) It very clearly would NOT cancel the swapping of tokens, because that is on the right side of the colon, and thus part of the effect/resolution. — Death by Chocolate · 1256 10/6/20
KiP is no longer 0xp! — MrGoldbee · 1314 10/20/20
1

Of all the quest cards released to date, this looks the most difficult to complete. In addition, trying to complete it makes things more difficult on your team. However, here are two things to consider:

1: You can coordinate with your team to try to achieve this in a round or two where very few tests are taken. It's pretty rare that any scenario gives you a round or two to spare, but getting your allies to take as few tests as possible while you focus on this gives you a decent chance of succeeding.

2: This will probably flip easiest in a 4-player game, where your allies can also add curse tokens to the bag. From the preview cards we've seen, it looks like some classes will be better at adding curses than others, so your mileage will vary. Still, getting a boost from your teammates will certainly speed things up.

In conclusion, combining these concepts should make flipping this pretty consistent. Thank you.

CrimsonMatt · 2
You cannot. Everything before the colon is the ability's cost; if there are fewer than ten curse tokens in the bag, you cannot satisfy the cost and therefore cannot initiate the ability. I think you're saying you could activate it with fewer than ten curse tokens and avoid discarding the grimoire, but since discarding the grimoire is part of the cost, you can't initiate the ability without ten curse tokens. — SGPrometheus · 687 5/14/20
Can I ignore the cost by "Knowledge is Power"? — king_doragon · 1 5/15/20
@king_doragon Huh. Uh... I don't see why not. Surely that doesn't work? I'd submit that to the devs; that's a good one. — SGPrometheus · 687 5/15/20
Yeah, that’s really awkward and definitely works as written. It should probably have that ‘if’ clause within the effect of the ability to avoid that. — Death by Chocolate · 1256 5/15/20
This will definitely get errata'd and/or FAQ'd real fast cause the wording is so awkward. As its stands, the second action could indeed be activated if there aren't ten curse tokens in the chaos bag. Discarding the grimoire is part of the cost only if there are 10 curse tokens in the bag. You are paying the conditional cost of discarding it and the rules regarding costs do not address this, so no other way to interpret it. — heppu · 2 8/13/20
I disagree and feel Knowledge is Power will not work for this. The only costs on the 2nd action are 1) the actual action cost and 2) the discard of the grimoire ; the "if there are..." line is a Triggering Condition, not an actual cost. It's like if you have a BOGO coupon for something but they only have 1 of that item; you can ignore the cost of the 2nd one, but you don't actually have the 2nd item available to complete the transaction. — Vafruvant · 1 8/25/20
It is not a "Triggering Condition": Triggering Condition A triggering condition indicates the timing point at which an ability may be triggered. Most triggering conditions use the word "when" or "after" to establish their relation to the specified timing point. Each eligible ability that triggers in reference to a specified timing point may be used once each time that timing point occurs. If multiple instances of the same ability are eligible to initiate, each instance may be used once. — Yenreb · 15 8/28/20
The "If" clause is a "prerequisite" of the ability. "If the ability has one or more prerequisites (costs and/or conditions), these are listed in text immediately following the icon. A player must always meet the prerequisites of a triggered ability in order to trigger that ability." But the instruction on Knowledge is Power is "resolve" (not "trigger") "an [action] or [free] ability," so as written I don't think the prerequisite would prevent you from choosing it. Hopefully an FAQ will clarify. — Yenreb · 15 8/28/20
Although the next phrase on Knowledge is Power is "ignoring all costs" -- as card text, not reminder text. The word "resolve" is used throughout the Rules Reference, but nowhere well defined; we might treat it as "do". In which case "resolve, ignoring its costs" could well mean "but still obey conditions," as you argue. No existing Tome or Spell assets have non-cost prerequisites on Action or Free triggered abilities, so it's not a question to have come up before this previewed card. — Yenreb · 15 8/28/20